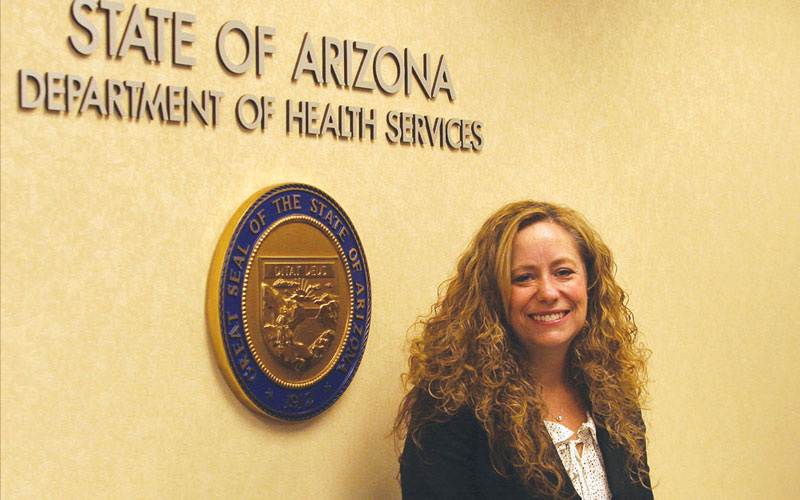 Cara Christ, director of the Arizona Department of Health Services (shown here in a file photo), says she has concerns about reliability of a federal report listing Arizona last in its rate of MMR vaccination coverage among children ages 19 to 35 months. (Photo by Mackenzie Concepcion/Cronkite News)

While the state’s top health official noted that the survey has a large margin for error and questioned its methodology, a leading immunization advocate said that over time the state has seen a “downward trend.”

“Arizona was identified as the state with the lowest coverage levels on MMR, and that’s concerning,” said Rep. Debbie McCune Davis, D-Phoenix, director of The Arizona Partnership for Immunization (TAPI).

However, McCune Davis said that comparing the survey results from one year to the next results in “a wide range of possible error in the statistics.”

Cara Christ, director of the Arizona Department of Health Services, said the state’s results were based on information covering about 300 children, which she said leaves room to speculate as to whether the survey is representative of the population.

The survey relies on parents’ responses about their children’s immunization coverage. That information is cross-checked with data from the children’s health care providers. If a child visited more than one provider but a parent failed to provide that information, the statistics may not be as accurate as they could be, both Christ and McCune Davis said.

Even accounting for the flaws in the survey, there is still reason to be concerned, McCune Davis said, adding that some community partners who work closely with TAPI have raised concern about what they believe may be a downward trend in immunization coverage.

McCune Davis said one challenge is a decision by state lawmakers to reduce subsidized child care, a change that she said provides less motivation for some parents to have kids vaccinated, as is required for those in child care.

Christ pointed to data her agency collects as more reliable, noting for example that the 2014-2015 Arizona Childcare Immunization Coverage report, covering children 18 to 60 months, showed 95.8 percent MMR coverage statewide. Among kindergartners the figure was 94.2 percent, and among sixth-graders it was 97.4 percent. In all, the reports cover 240,000 children, Christ said.

“We believe that we are much better than the national survey,” she said.