Dr. Daniel Derksen told members of a congressional panel Tuesday that more than 50 rural hospitals have closed since 2010 and another 250 – including Cochise Regional Hospital – are at risk. (Photo by Nick Wicksman)

The government cut off Medicare payments this month to Cochise Regional Hospital in Douglas. Officials went to court to restore funding, saying the facility will have to close without it. (Photo by People’s Choice Hospital) 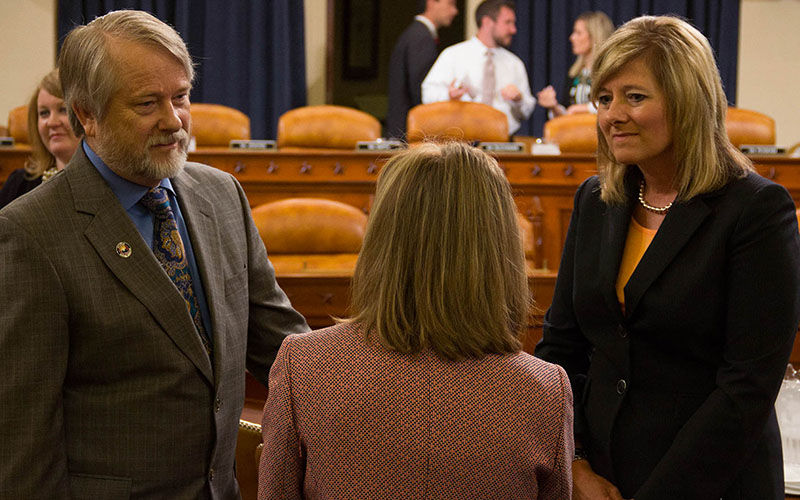 WASHINGTON – Medicare restrictions are crippling rural healthcare centers like Cochise Regional Hospital, which is set to close Friday after a funding dispute with the federal agency, an Arizona health expert testified Tuesday.

Dr. Daniel Derksen, the director of the University of Arizona’s Center for Rural Health, was one of several health care experts testifying before a House subcommittee on “rural health disparities created by Medicare.”

They told a House Ways and Means subcommittee that rural facilities operate on such thin margins that any change in policy or delay in payment can “push them over the brink.”

A previous version of this story misspelled the name of a lawyer involved in the issue. The attorney representing the hospital is Harley Goldstein. The story here has been corrected. Clients who used this story are asked to run the correction that can be found here.

Derksen testified that more than 250 rural hospitals are at risk of closure, and if Cochise Regional closes this week it would be the 55th hospital to do so since 2010.

“Medicare stopped paying them,” Derksen said of Cochise Regional, a 25-bed hospital in Douglas. “Because they have very thin fiscal margins, they don’t have the cash reserves to stay open beyond Friday unless the Medicare payment pipeline’s open.”

The hospital has gone to court to do just that, asking a federal district judge to force the government to keep funds flowing while it appeals Medicare’s decision to cut off funding earlier this month.

Harley Goldstein, an attorney representing the hospital, said that without the reinstatement of Medicare funds “the hospital lacks the funds to continue to operate, and will be closing its doors on Friday.”

Closing would cost 70 employees their jobs and force the more than 20,000 people served by the hospital to travel miles to the next-closest hospital, while chronically ill patients could face two-hour trips for proper care, the complaint said.

Cochise Regional Hospital is a “critical access hospital,” which means it has 25 or fewer beds and is 35 miles from any other hospital.

But in its response last week to the hospital’s court filing, the government said it cut off funding because Cochise Regional has failed to comply with federal regulations. It said that four surveys over the course of the past year found “continuing, serious problems with basic nursing care.”

The government said the hospital had ample opportunity to make the necessary changes to come into compliance, but had not done so and was “unlikely to succeed” in its appeal.

One of the Medicare regulations that took up most of Tuesday’s hearing was a discussion of the agency’s 96-hour rule.

In order to participate in the Medicare program, hospitals have to keep the average stay for its patients at 96 hours or less over a year. But Medicare can deny reimbursement to a hospital for individual patients whose stays exceeds that 96-hour threshold, witnesses said.

Medicare requires a physician to “certify that a beneficiary may reasonable be expected to be discharged within 96 hours after admission,” testified Carrie Saia, CEO for the Holton Community Hospital Family Practice Associates in Kansas.

Derksen said “cuts and threats to Medicare payments … do not improve health outcomes,” pointing to the situation at the Cochise facility.

“Small Medicare payment, regulatory or reporting changes can push them (rural health care facilities) over the brink,” he said.

Derksen believes getting patient stays within the allotted 96 hours is a matter best dealt with at the educational level.

“I think there’s opportunities to train more health professionals in areas where they are most needed, through teaching health centers,” Derksen said after the hearing.