Drug overdoses were the leading cause of death by injury in Arizona and 35 other states, according to a new report. It said that prescription drug overdoses accounted for about half of that total.(Photo by Danielle Grobmeier) 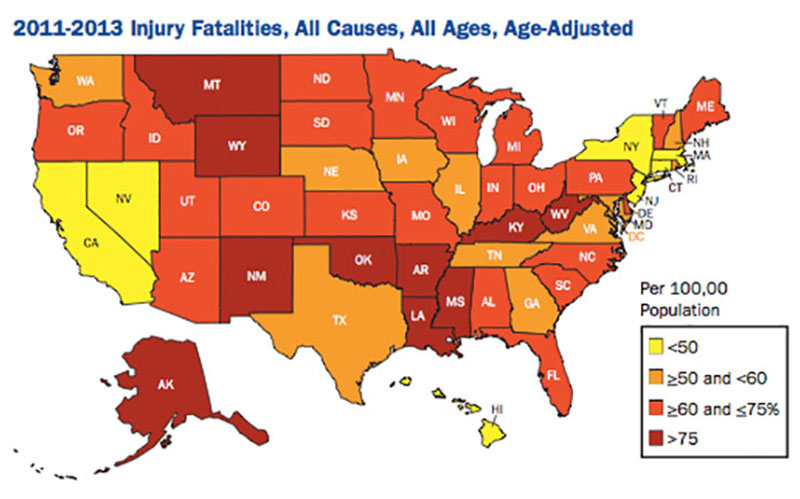 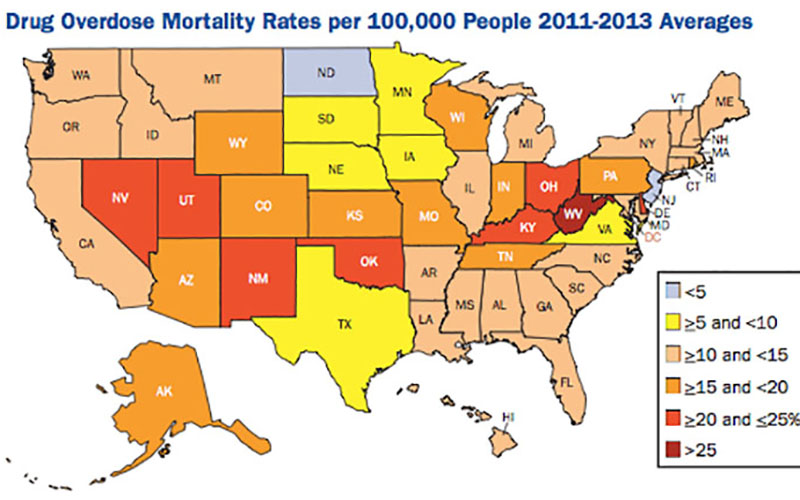 The leading cause of death from injuries in Arizona was drug deaths, with 17.8 deaths per 100,000 residents from 2011-2013, the 10th-highest rate in the nation. Arizona was one of 36 states where drugs were the leading injury-death cause. (Map courtesy the Trust for America’s Health)

WASHINGTON – Arizona had the nation’s 12th-highest rate of deaths from injuries from 2011 to 2013, and drug-related injuries accounted for the largest number of those deaths, a new report says.

“Injuries are not just acts of fate,” said Jeffrey Levi, executive director of the Trust for America’s Health, as he released the report Wednesday. “Research shows they are pretty predictable and preventable.”

“The Facts Hurt: A State-by State Injury Prevention Policy Report” said injury remained the leading cause of death for Americans ages 1 to 44.

But it said that drugs have risen to become the leading cause of injury in 36 states, including Arizona, outstripping even motor vehicle injuries.

The report said Arizona’s drug overdose death rate of 17.8 fatalities per 100,000 people was 10th-highest in the nation.

Nationally, half of the 44,000 annual drug overdose deaths came from prescription drugs.

How Arizona fared on a national report card on injury-prevention measures.

Arizona got credit for having:

The report also graded each state’s injury prevention efforts, with Arizona getting points for four of the 10 indicators measured. It was in good company: 29 states got scores of 5 or less.

The state was knocked, however, for its lack of a “rescue drug” law. Such laws allow the administration of naloxone, a drug that can be used to counteract overdoses, by lay people as well as medical professionals.

Sharon Stancliff, the medical director for Harm Reduction Coalition, said rescue drug laws almost always pass once they are introduced in the state legislature and she was not sure why Arizona had not done so.

State health officials and experts with universities and private groups in Arizona did not immediately return calls seeking comment on the report Wednesday.

But Stancliff said a prescription drug monitoring program alone is not enough to help with every stage of addiction.

“I think you need a lot of different things,” she said. Prescription monitoring plans can help keep people from getting addicted, but those are are already dependent also need help, she said.

In addition to reducing people from getting addicted in the first place, she said, health care officials need access to addiction-breaking drugs to wean people off their addictions as well as access to drugs like naloxone stop overdoses in a crisis.

There are no specific reasons why states have not adopted all the measures recommended in the report, said Albert Lang, a Trust for America’s Health spokesman. But he said the trust looks at numbers on the state level because “it’s a lot more useful” to scale the data down from national numbers.

Besides getting “more information out,” the state breakout lets lawmakers and other officials see specific improvements and weak spots in their states, he said.

“It’s not rocket science,” Levi said of actions needed to be taken to reduce deaths from injury. “But it does require some commonsense and investment in good public health practice.”