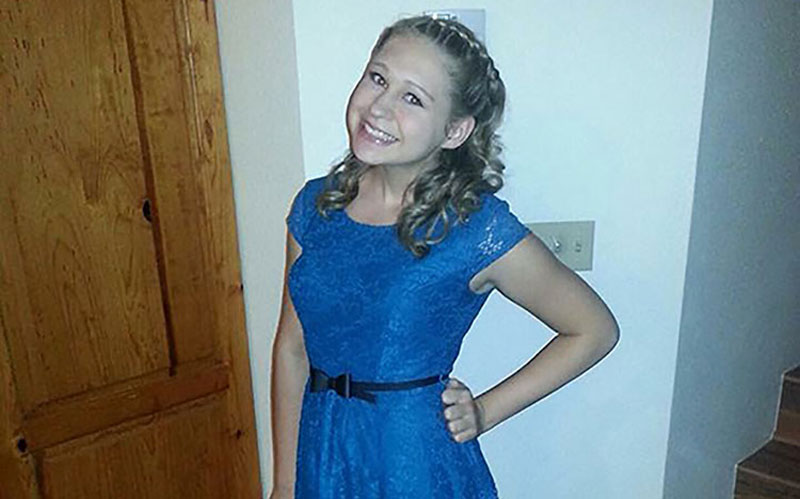 Jasmyne Gramza in October. The Phoenix teen developed an autoimmune disorder after she received her third done of Gardasil, a vaccine that her mother thinks played a role in the illness. (Photo by Tarah Gramza)

Jasmyne Gramza, 14 at the time, undergoing treatment in May 2014 after her platelet levels dropped to a dangerous low. (Photo by Tarah Gramza) 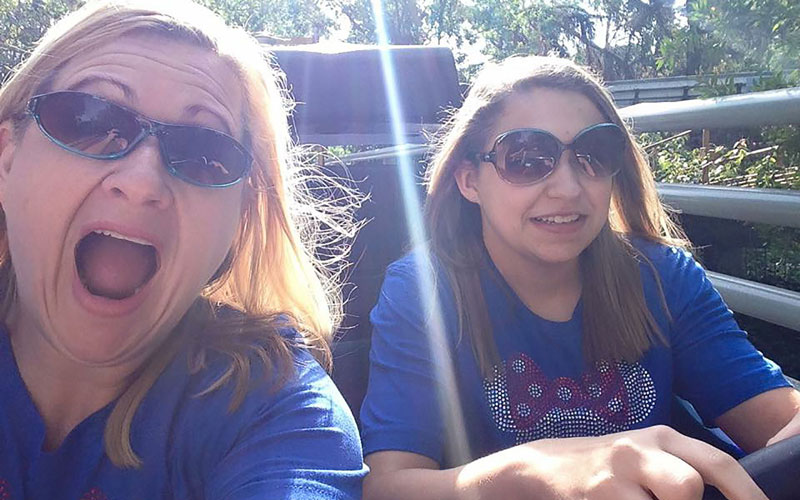 Instead, Gramza is beginning what could be a years-long legal battle with the U.S. government, trying to get an infinitesimal slice of the $3.5 billion fund set aside to compensate people who have adverse reactions to vaccines.

Gramza, like most Americans, had never heard of the National Vaccine Injury Compensation Program – the trust fund that’s financed by a 75-cent tax on each dose of vaccines that the Centers for Disease Control and Prevention recommends for children.

The program started in the 1980s after a number of vaccine manufacturers threatened to pull out of the United States in the face of a growing number of lawsuits.

In order to protect the vaccine supply, and keep the majority of Americans immune to possibly devastating disease, Congress pledged to protect the manufacturers from lawsuits.

But some say that solution – the National Vaccine Injury Compensation Program – is not living up to its promises. It’s complicated, litigious and time-consuming – and often ends without any compensation at all.

‘The last thing on my mind’

Three months after Gramza’s daughter, Jasmyne, received her third dose of Gardasil, a vaccine that protects against the human papillomavirus, she started bruising easily all over her body.

Gramza didn’t think anything of it at first, but a year later Jasmyne was diagnosed with an autoimmune disorder that brought her platelet levels to a dangerous low. Doctors said they didn’t know what caused Jasmyne’s disorder.

“I did not think in a million years it would have been a vaccine,” Gramza said. “Not even kidding. It was the last thing on my mind. ”

Merck and Co., which manufactures Gardasil, did not comment on the Gramzas’ situation. But in a statement to Cronkite News, the company said that while “no vaccine is completely without risk, leading health organizations throughout the world continue to recommend Gardasil.”

The company’s information sheet on Gardasil said that people in clinical trials who reported developing autoimmune disorders did so at the same rate whether they were receiving the vaccine or a placebo.

“Nothing is more important to Merck than the safety and effectiveness of our vaccines and medicines and the people who use them,” the company’s statement said. It said it remains confident that Gardasil is “helping prevent cervical cancer and other HPV (human papillomavirus) type 6, 11, 16 and 18-related cancers and diseases.”

Doctors are supposed to provide patients with vaccine information statements before each shot, which includes benefits of the vaccine but also possible side effects – and a description of the vaccine compensation program.

“I don’t think anybody ever reads those things,” said Drew Downing, a Phoenix lawyer who specializes in vaccine injury cases. “And that’s really the only place that the vaccine program is really ever talked about.”

Not knowing could mean losing out on an opportunity for compensation. A claim must be filed within three years of the initial vaccine reaction or two years of death.

By the time Gramza filed a claim with the National Vaccine Injury Compensation Program, it had been more than two years since her daughter’s final Gardasil dose.

“I had never heard of it (the compensation program),” Gramza said. “I knew nothing about it, which is crazy because it’s not something you hear about in health care. Nobody talks about it. It’s not even known.”

Downing said he gets a call about every other week from someone who “very well might have a valid adverse reaction to a vaccine, but didn’t know about the vaccine program’s existence.”

If people miss the deadline, there’s nothing that can be done because “your lack of knowledge of your legal rights is no excuse,” he said.

And, in almost all cases, the compensation program is really the only legal option available to people injured by vaccines.

To successfully sue a vaccine manufacturer today, you would have to prove fraud, Gentry said. Injury lawsuits were basically eliminated with the Supreme Court’s decision in Bruesewitz v. Wyeth.

“So really they have nothing, these people have nothing,” Gentry said. “You either go into this program or you get nothing and it’s waived. Or you take what you get here and you’re done.”

Barbara Loe Fisher, president of the National Vaccine Information Center, said the Bruesewitz decision took away any ability for an individual to hold a vaccine manufacturer accountable.

But the Biotechnology Industry Organization, which represents vaccine manufacturers, said that “no-fault” protection is what’s needed to ensure public health through a reliable supply of vaccines. Without it, litigation “threatened to bankrupt manufacturers and/or lead to skyrocketing costs for vaccines,” it said.

“No vaccine is completely safe in the entire population, and it remains a public health priority to have manufacturers remain in the vaccine-development business,” the statement said. “The VICP allows for a fair and much more simple process of filing claims for potential injury due to vaccines.”

It said it “strongly supports” what it called a “fair and expeditious system to compensate those who may have rare reactions to vaccines.”

Gramza said it’s frustrating to know she can’t sue for Jasmyne’s injury, especially when she thinks about how much money companies bring in from vaccines like Gardasil.

But Downing said civil litigation was never a very successful option for clients, and that the compensation program, although difficult, is much easier than trying to sue a vaccine company.

“Most of my clients that have recovered in the vaccine program for valid vaccine-caused injuries would have had a difficult run in district court,” Downing said.

The Vaccine Injury Compensation Program was created to be “petitioner-friendly, informal, non-adversarial and generous,” Gentry said.

“And it’s informal, but that’s about it as far as everything else goes,” she said.

Downing said even when cases are fairly simple, “the government will fight.”

This is especially true for newer vaccines, like Gardasil. Reactions to new vaccines are unpredictable, Downing said, which means evidence and expert testimony are required to prove a vaccine caused the injury.

Gentry said that Gardasil’s post-marketing surveillance, which documents adverse effects, has not even been released yet – which means there is little scientific literature to help lawyers make their cases.

But despite a lack of literature, victims still need to file claims within three years or “you lose your rights,” she said.

That’s a lot of time that a lot of victims don’t have when medical bills are stacking up.

Jasmyne went into remission in August, but Gramza said she’s still paying for her medical treatments and more bills are added all the time, since Jasmyne continues to see a specialist to make sure her condition doesn’t return.

“Oh my gosh – I’m still up to my eyeballs with medical bills for her that I’m paying,” Gramza said.

But Gramza is more concerned about 15-year-old Jasmyne’s future – and the medical bills that could present themselves years down the road. Jasmyne’s condition has a 50 percent chance of returning and is known to cause serious complications during pregnancy.

If she wins any money through the program, Gramza said she plans to put it in a fund so Jasmyne can support herself – go to college and take care of any medical issues that appear as a result of the vaccine.

“I just worry about her future with her medical bills,” Gramza said. “That’s the biggest thing.”

Gramza didn’t realize it at the time, but just by paying for Jasmyne to get three doses of Gardasil, she was actually making a $2.25 payment to the National Vaccine Injury Compensation Program.

The compensation program is like a “self-insurance policy,” Fisher said, collecting 75 cents on each vaccine dose. That has amounted to more than $3.5 billion, but experts say that money isn’t coming from the vaccine manufacturers – the cost is passed on to patients.

For being a quasi-insurance policy, Gentry said, “you shouldn’t have as much difficulty getting money back out as they do.”

There is currently more cash on hand in the vaccine injury trust fund than has been spent to run the compensation program for the past 27 years – and it keeps growing.

While spending on compensation, attorneys’ fees and operational expenses has increased since 1999, it has been outpaced by the money coming in from the 75-cent fee on each vaccine dose, according to a November report by the Government Accountability Office.

There have been an average of 466 claims filed per year and 190 claims compensated per year since 2005. In the same time, the average annual amount spent to operate the program was $148.7 million – all while the trust fund balance has climbed past $3.5 billion.

Knowing there is $3.5 billion sitting in the fund can be “frustrating,” Gentry said.

“They don’t want to give any money to somebody who wasn’t injured … I can understand that, certainly, but Congress did say, if you look in the legislative history, that it was better to compensate a child who wasn’t injured than to miss one that was,” Gentry said.

Gramza said it “makes me nauseous.”

“If there’s $3 billion in the account and there’s only several hundred cases a year that really go through that … if you can show causation, why are you (the government) fighting?” Gramza asked.

But Downing said the trust fund needs to be as high as it is in the event of a new vaccine being added down the road or a scientific discovery that makes it easier to prove a vaccine triggered a reaction.

“I think at first blush it might seem alarming to someone looking at it and saying, ‘Good grief, why are they being so litigious then? If the trust fund is so flush with cash, then why aren’t families being compensated faster?'” Downing said.

He noted that in 2007, special masters from the U.S. Court of Federal Claims heard the autism omnibus proceedings, which consisted of thousands of families who believed that two types of vaccines triggered autism in their children. The court ruled against the families, but if it hadn’t, the proceeding would have “taken all $3.5 billion to compensate them,” Downing said.

“It sounds like a lot of money, but it’s a safety net,” he said.

Gramza knows that Jasmyne was a “perfect event” – one in a million in the worst of ways.

“She had the perfect mix in her body that made her body somehow think that whatever was in that vaccine was not OK for her,” Gramza said.

She now encourages other parents to research vaccines and make sure that the “benefits outweigh the risks.” Most vaccines do, she said, but added that she won’t be giving Gardasil to her other child.

“Not to scare you, but you need to know both sides before you make sure that the benefit outweighs the risk, because I don’t think that the people who make vaccines are doing a good job of educating us,” Gramza said.

Gramza isn’t expecting much out of the compensation program and knows a long legal road lies ahead of her – “it’ll be over a year, easy,” she said.

“If we get anything, it’s a blessing,” Gramza said. “You don’t go into it thinking that you’re going to have a large amount of money, and that’s not the purpose.”

Gramza said Jasmyne wanted to file a claim so she could “share her story” and make the public aware of what happened to her.