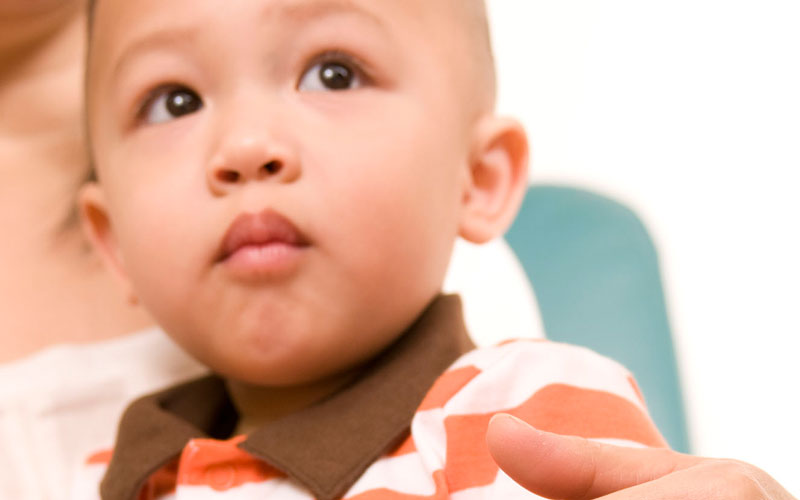 A young boy gets an intramuscular vaccine injection in his thigh in this 2011 file photo from the Centers for Disease Control and Prevention. (Photo by Amanda Mills courtesy CDC)

A nurse immunizes a girl in this 2006 file photo from the CDC. Every dose of vaccine in the U.S. carries a 75-cent excise tax that goes toward the Vaccine Injury Compensation Program. (Photo by James Gathany courtesy CDC)

The act was a response to vaccine manufacturers’ threats in the 1980s to pull out of the United States, after a number of lawsuits by parents who believed their children were injured by vaccines. Congress, wanting to protect the U.S. vaccine supply, created the Vaccine Injury Compensation Program.

The Biotechnology Industry Organization said the program “has been enormously successful in helping to protect public health” by allowing manufacturers to stay in the vaccine development business.

The “no-fault” system for resolving vaccine injury claims ensures “a fair and expeditious system to compensate those who may have rare reactions to vaccines,” the organization said in a statement.

It was supposed to be an “expedited, less-traumatic, less-expensive alternative to the lawsuit,” resulting in the most “generous federal compensation possible,” said Fisher, the president of the National Vaccine Information Center.

It’s no longer an alternative, Fisher said, and it’s a lengthy and challenging process – that often ends without compensation.

The National Childhood Vaccine Injury Act, signed into law in 1986, set up a number of steps to protect parents and children, while also protecting the vaccine manufacturers. This is how it’s supposed to work:

That’s how it’s supposed to work. But in the past 27 years, some say, things have changed.

To begin, the compensation program is no longer supporting just children.

In 2005, the flu shot was added to the program, making adults eligible for compensation, as well. Since then, 71 percent of compensated claims have gone to individuals over age 18, according to officials from the Vaccine Injury Compensation Program.

“We feel that it has not been implemented the way it should have been and we’re very, very concerned that today a majority of the compensations that are awarded are awarded to adults,” Fisher said.

The most recent vaccines added to the compensation program do not yet have any associated injuries listed “on table.” That means a longer and more challenging legal journey for petitioners because they have to prove the vaccine caused the injury, usually with extensive medical research and expert testimony.

Officials from the Vaccine Injury Compensation Program said there are no on-table injuries for the newer vaccines, “because at the time they were added there were not any known associated injuries.” They said the Health Resources and Services Administration is currently considering adding injuries to the six vaccines added to the program since 1999.

Drew Downing, a Phoenix lawyer who specializes in vaccine injury cases, said a “straightforward” vaccine injury case that revolves around a vaccine on the injury table takes six to eight months to adjudicate. If a case is complicated and involves an off-table injury, it can take years.

Downing said compensation claims have become increasingly litigious, beginning about six years ago. Even when cases are fairly simple, “the government will fight,” he said.

With newer vaccines, it is difficult to find literature and experts to back up claims, because after-market research on these vaccines hasn’t been completed yet, she said. But, victims still need to submit a claim within three years of the first symptom.

“If there’s no literature out there, there’s nothing you can do, but you’ve still got to go ahead and file your claim or you lose your rights,” Gentry said.

Even when you can find an expert in the field, convincing them to testify is “incredibly difficult,” Gentry said. Medical experts fear being labeled as anti-vaccine, she said.

Downing said he’s run into the same issues in his cases – most pediatricians won’t go on the record to say a vaccine triggered a reaction.

“It’s because of the stigma attached to the anti-vaccine movement,” Downing said. “They just don’t want to be associated with it in that regard.”

Gentry said the vaccine injury claim legal process is complicated and that, “it’s knock-down, drag-out fighting at every step.”

When asked about the increased difficulty of wining compensation, a Justice Department official said the standard of proof for people making an off-table claim was set by Congress and affirmed by the courts.

She also said that the law gives the Health and Human Services secretary the authority to amend the Vaccine Injury Table “as more accurate information concerning the safety of vaccines became available.”

The spokeswoman noted that “ongoing efforts to create the safest, most effective vaccines yielded new formulations that produced fewer reactions.”

That may be. But Fisher said the compensation program has become a difficult process that often ends without compensation – not at all what she thought it would be when she helped draft the law.

“Those of us that have worked on this law, we feel that it has not been implemented in the way that we certainly were promised,” Fisher said. “We’re disappointed in what’s happened.”