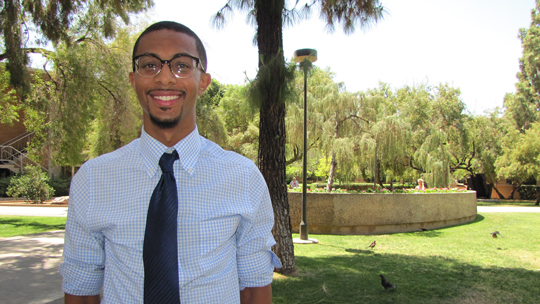 Chance Love, a spokesman for The River Source, said the rehabilitation center has seen new patients who were influenced by a Cronkite News documentary on heroin addiction in Arizona. (Photo by Emily Mahoney)

Since Jan 13, when every TV station in the state aired “Hooked: Tracking Heroin’s Hold on Arizona,” The River Source, a residential addiction treatment center with locations in Mesa and Arizona City, has seen patients citing the documentary, spokesman Chance Love said.

“It did definitely influence some patients with choosing to come in for treatment,” he said. “It’s a very sensitive topic that people don’t want to discuss or talk about, and the fact that many news stations were shut down so a lot of people didn’t have anything else to watch at that time and it brought their fears or concerns to surface.”

Love said patients with heroin addictions constitute about 80-85 percent of admissions to the center.

But besides people with heroin addictions, the documentary has also helped the public understand the scope of heroin use in the state, he said.

“It was like a State of the Union address,” Love said. “I think it not only affected the substance abusers, but I think the parents, the friends that know friends that need help with treatment, and it just made it quite clear and concise about how big this problem really is.”

Calvary Addiction Recovery Center, which has locations in Phoenix and Gilbert, has seen an increase in patients since the documentary aired, CEO Jim Kreitler said.

“Since that time our admissions are up about 10 percent, and I certainly couldn’t attribute all of that to the documentary, but obviously anything that generates more talk about addiction and treatment helps people,” he said.

Kreitler said general referrals also increased because of the call center that operated during the documentary’s airing, which referred callers to rehabilitation resources around the state.

The River Source required admissions staff to watch “Hooked,” and the Calvary Addiction Recovery Center made it mandatory for patients.

“All the staff was encouraged to see it; we actually shut down all the programming in the unit and had all our patients watch it, which we think was very powerful,” he said. “We’re so proud of … all the TV stations that showed it. It made me proud to be in Arizona.”

Kreitler said the next steps should focus on spreading the word about treatment options for people struggling with heroin addiction.

“We’re trying to build on (the documentary),” he said. “We’ve identified that it’s a really big problem and now we want to help people. We want to let people know that recovery is possible and there’s a variety of different resources they can go to because we want people to have hope.”

Chris Hayes, admissions coordinator at The River Source, was once addicted to heroin and has been sober for 21 months.

He said the documentary was an accurate portrayal of what it’s like to be addicted to heroin, and these trials of addiction are why he’s dedicating his career to help others find help.

“I did a lot of things I’m not proud of to get and use drugs, and a lot of that is the reason why I continued to use it,” he said. “That’s how I valued myself as I person, so being numb seemed the only way to live life. Learning those tools and using those resources was invaluable to me.”

Hayes said he hopes more people come to understand that addiction is not a lack of willpower but is instead a disease that can be cured.

“I used to have this feeling that, ‘I’m alone, there’s nothing, there’s no help and things are never going to change,'” he said. “After being sober for 21 months I no longer have (arrest) warrants. I have a driver’s license again and I have a job. I’m employable and I found out I’m actually a good person.”

The map below shows some of the centers in Arizona offering help for those with heroin addiction.