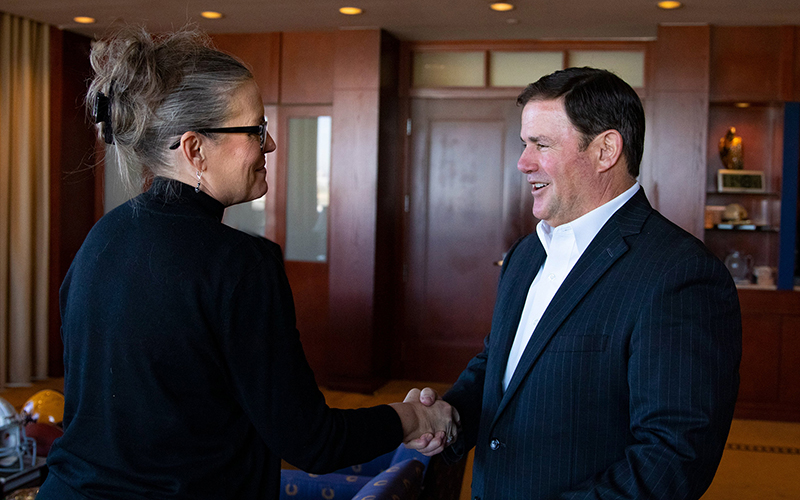 Gov.-elect Katie Hobbs shakes hands with Gov. Doug Ducey Wednesday at a meeting in the governor’s office. Ducey congratulated Hobbs and said it is time for Arizonans to move forward “no matter who we voted for,” an apparent rebuke to GOP gubernatorial nominee Kari Lake, who has refused to concede. (Photo courtesy Arizona governor’s office)

WASHINGTON – Ignoring challenges and election critics, Gov.-elect Katie Hobbs pressed on toward a transition Wednesday as aides laid out the incoming administration’s priorities and promised she will be “a governor for all Arizonans.”

That message was seconded by Gov. Doug Ducey, who met with Hobbs and congratulated her in a tweet on “her victory in a hard-fought race.”

“All of us have waited patiently for the democratic process to play out,” Ducey wrote Wednesday. “The people of Arizona have spoken, their votes have been counted and we respect their decision.”

It was an apparent rebuke to losing GOP gubernatorial nominee Kari Lake, who continues to promise a challenge of the election that she has claimed was “botched beyond repair.”

Republican attorney general nominee Abe Hamadeh has already taken that step, filing suit Tuesday against his Democratic opponent, Kris Mayes, as well as Hobbs and the county recorders and supervisors from all 15 counties in the state.

Mayes led Hamadeh by just 510 votes out of more than 2.5 million cast in the attorney general’s race as of Monday, when the secretary of state’s office completed its count of all ballots.

Their race is one of three that will go to a mandatory recount next month under a new state law because the final results were within 0.5 % of each other. 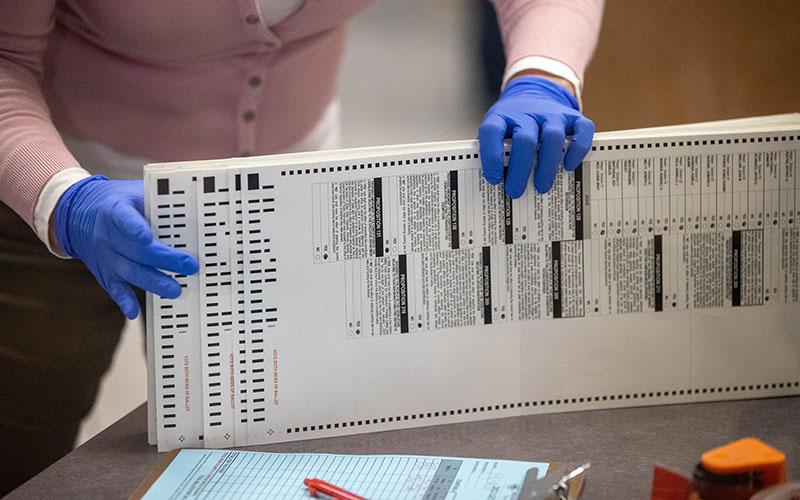 The other mandatory recounts will be in the race for superintendent of public instruction, where Republican Tom Horne has 50.2% of the vote to Democratic incumbent Kathy Hoffman’s 49.8%; and the House race in Legislative District 13, where Republican Liz Harris has 32.57% to fellow Republican Julie Willoughby’s 32.37% in the race for the second seat in the district. Democrat Jennifer Pawlik won the first seat in District 13 with 35.05% of the vote.

Hamadeh’s suit, filed along with the Republican National Committee, explicitly states at the outset that it is not “alleging any fraud, manipulation or other intentional wrongdoing” in the election. But it does charge that there were errors in the voting and counting process that could have affected the outcome.

It calls on the Maricopa County Superior Court judge to block the certification of election results and declare Hamadeh the winner of the attorney general’s race. The deadline for county officials to certify election results is Nov. 28, and the state must approve the final canvass by Dec. 5.

Hamadeh’s campaign did not respond to a request for comment Wednesday.

The governor’s race is not subject to a mandatory recount because Hobbs beat Lake by 17,116 votes, or 0.6% difference of the 2.56 million cast. Lake has yet to concede to Hobbs, nor has she called for a recount like Hamadeh.

Lake’s campaign did not respond to a request for comment Wednesday. But in a statement posted to her Twitter account Monday, Lake told supporters she would fight to “restore confidence and faith in our elections.”

“Attorneys are working diligently to gather information, whistleblowers ARE coming forward and the curtain is being lifted,” Lake wrote. “Whether done accidentally or intentionally it is clear that this Election was (a) debacle that destroyed any trust in our elections.”

But Ducey Wednesday called for Arizonans to move forward from the election “no matter who we voted for.” He met with Hobbs in the governor’s office, posed for pictures with her and promised to help throughout the transition process. 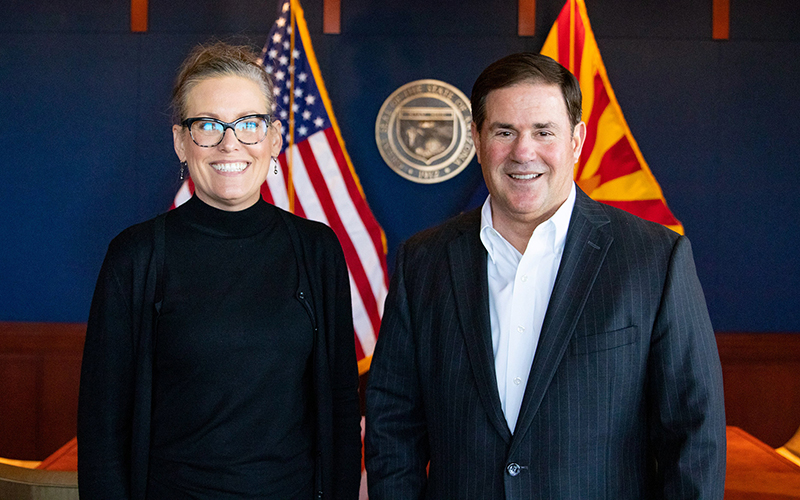 Earlier Wednesday, Hobbs’ transition team in a call with reporters emphasized that Hobbs’ experience as secretary of state will help her and her team work toward healing partisan divides.

“We will continue to share trusted and truthful information about what happened in the election and hope that others can begin to tone down the rhetoric,” said Allie Bones, the current assistant secretary of state and Hobbs’ pick for chief of staff. “We understand that there’s a path forward to healing all these divisions and making sure that folks believe and have faith and trust in the government.”

Also on the call were Michael Haener, former deputy chief of staff to Gov. Janet Napolitano, and Monica Villalobos, president of the Arizona Hispanic Chamber of Commerce.

Bones stressed that after Hobbs is inaugurated in the first week of January, the new administration will work to serve everyone in the state, even those who didn’t support her.

“We plan to build an administration and policy platform that is reflective of the needs of all Arizonans and we’ll continue to work in that manner,” Bones said. “Obviously, there are people in the state who did not vote for her, but that does not mean that she is going to govern for only those who did.”

Villalobos, a Republican, said that starts with diversity on the transition team and in the roles the administration is looking to fill.

“The transition committee is committed to making sure that we are providing as much as possible and bringing the best and brightest to the table for the governor-elect and her team to select,” Villalobos said. “This is a brand-new administration that’s going to look, feel, sound a lot more like Arizona lives.”