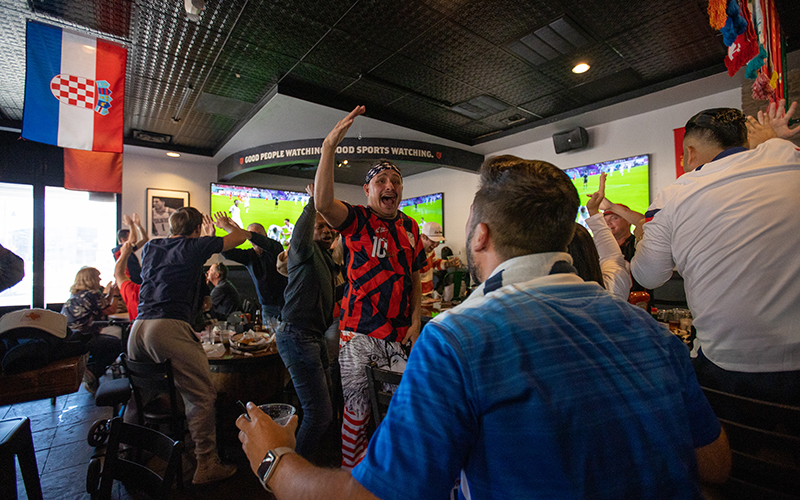 Despite controversies in Qatar, soccer fans in Arizona still were drawn to the World Cup. At Crown Public House in downtown Phoenix, fans celebrate a U.S. goal. (Photo by Susan Wong/Cronktie News) 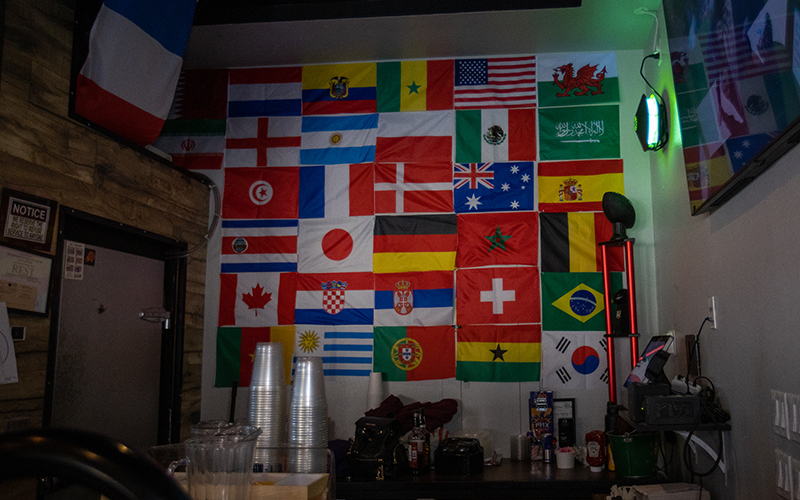 Flags from around the world are showcased at the Crown Public House sports bar, where fans gathered to watch the U.S. men’s national team. (Photo by Susan Wong/Cronkite News)

PHOENIX – Red, white and blue signs were taped to the windows Monday at Crown Public House, but one contained a message that stood out among the rest: “You’ll have more fun watching games here than watching games there.”

Considering Qatar has banned the sale of alcohol in stadiums for this year’s World Cup, and United States fans in Phoenix enjoyed a pint or two (or three) on this workday afternoon, the messaging was accurate and evident during the United States’s 1-1 draw with Wales to open its World Cup play in Group B. The opener marked the first World Cup match for the Americans since 2014, after failing to qualify in 2018.

“Missing the last World Cup was fairly pathetic for a country of our size,” said Dave Woodruff, who was one of several dozen soccer fans sporting a red, white, and blue USA jersey at Crown Public House. “I’m glad they decided to purge some of the older players that were good, but weren’t good enough.”

Crown Public House co-owner Jason Bell, who has had the bar for five years, hosted fans of the United States during a men’s World Cup for the first time. The venue caters to Liverpool supporters during the club soccer season.

Bell anticipates large crowds to continue showing up, like Monday, over the next month.

There wasn’t an empty seat at the bar or tables during the U.S. match against Wales, which marked the beginning of a new era of American soccer, and one that will extend into the 2026 World Cup on North American soil in existing football and soccer stadiums located across 16 cities in Canada, the U.S. and Mexico.

Hosting the tournament likely will provide a welcome improvement from this year. Many fans have had trouble justifying their enjoyment of the tournament due to the measures Qatar took to host and its human rights record as a nation.

But World Cups clouded by off-the-field issues is nothing new, Woodruff said.

“There’s probably not been a World Cup in history that hasn’t had some sort of problems,” Woodruff, 62, said. “I went to Brazil (in 2014) and we were in stadiums that I was sure were going to fall down.”

Despite a long history of negative press, this year’s tournament has developed into one of the more dysfunctional and corrupt World Cups than others, both on and underneath the surface.

Qatar was awarded the 2022 FIFA World Cup in December of 2010, in large part due to the country’s wealth and ability to financially influence two members of the FIFA Executive Committee.

“I just feel that FIFA is the one that’s dirty,” Bell said. “They got paid for it to be there.” 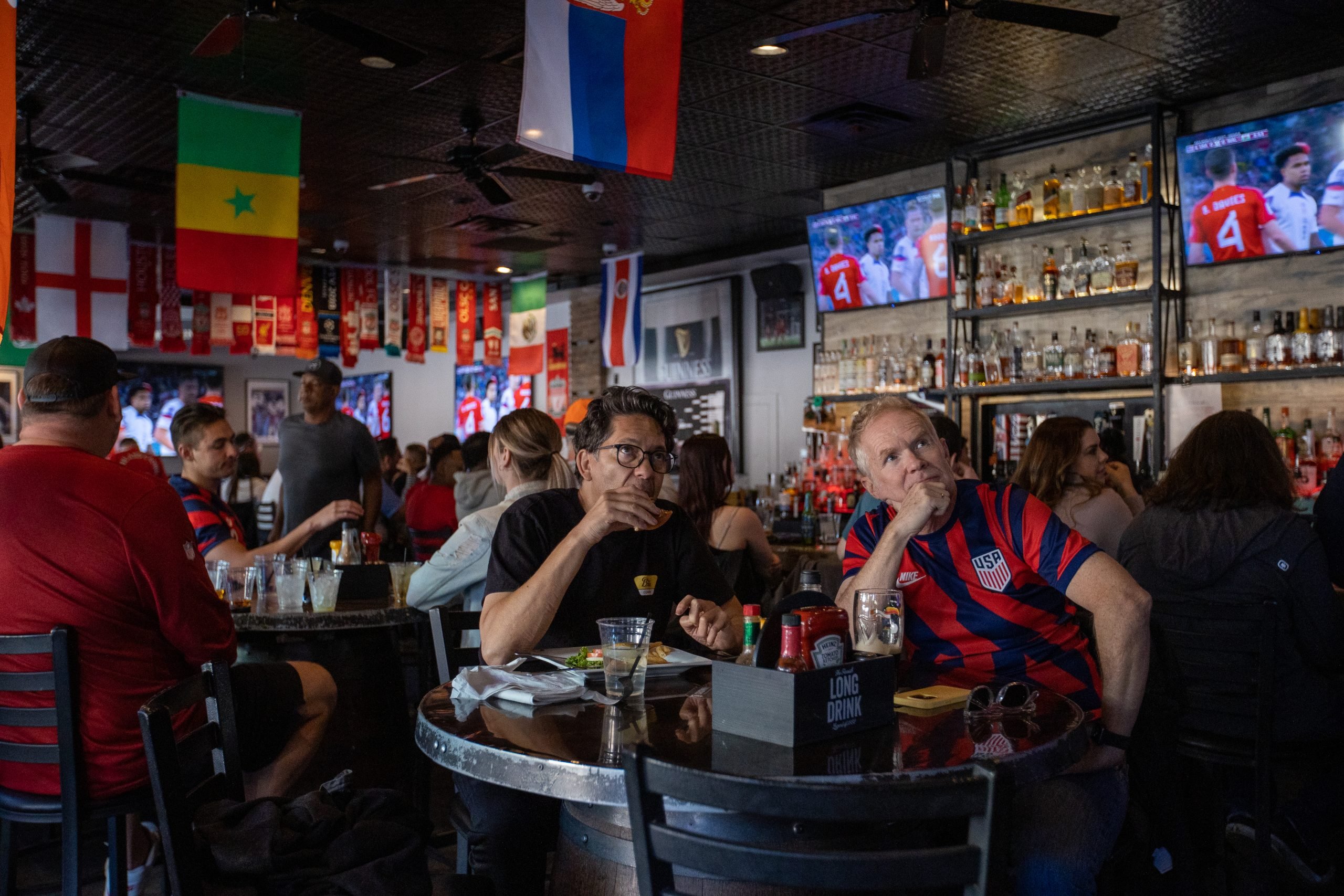 Steve Lynch, left, and Dave Woodruff were among those that watched the U.S. men’s team play to a 1-1 draw against Wales to open their play in Group B. (Photo by Susan Wong/Cronkite News)

Most countries bidding for the World Cup need a group of eight to 10 mostly ready world-class stadiums. At the time Qatar was awarded the 2022 World Cup – one of the world’s biggest sporting events – only one of the eight current stadiums in Qatar existed.

Khalifa International Stadium opened in 1976, but the seven other stadiums had to be built and completed by November 2022, less than 12 years later. In order to meet the requirements to host, Qatar brought in tens of thousands of migrant workers to construct the stadiums and other infrastructure. Many of those workers say they faced poor pay and inhumane conditions such as living in overcrowded buildings, often without running water and proper sanitation.

The daily construction took place in dangerous heat, with the average temperature in summer months exceeding 105 degrees, which is why this World Cup is the first to take place in the winter.

As many as 6,500 people reportedly have passed away from India, Pakistan, Nepal, Bangladesh and Sri Lanka since Qatar was awarded the World Cup, the Guardian reported after collecting findings from government sources. That number does not necessarily mean that the deaths were World Cup-related.

Still, as a result, many fans in Phoenix and around the world feel a level of guilt in supporting the World Cup.

“I don’t think it should be there,” Englishman Steve Lynch said. “The corruption that went on with that, and then the human rights issues doesn’t help.”

Once Monday’s match kicked off, fans seemed not to care what country the stadium was in. The bar crowd grew increasingly frustrated with the referee after two early yellow cards were shown to Sergiño Dest and Weston McKennie of the U.S. men’s team.

The mood changed quickly in the 36th minute, when Christian Pulisic drew several defenders before delivering a perfect ball to Timothy Weah, who found the back of the net and sent Crown Public House into euphoric chants of “U-S-A.”

Wales commanded the second half and ultimately earned a penalty kick, which Gareth Bale converted from the spot in the 82nd minute. Despite screams of encouragement from the Phoenix bar over the final eight minutes, plus stoppage time, the U.S. team could not find a winning goal.

After managing only a point with the draw against Wales, the United States now turns its attention to an even tougher task on Friday: England. The Three Lions are coming off a 6-2 win over Iran.

While a loss to England wouldn’t completely eliminate the United States from Cup contention, it would create a scenario where coach Gregg Berhalter and his players would need some serious help from uncontrollable scenarios, even with a U.S. win over Iran.

Lynch and Woodruff respected how the Iranian players chose not to sing their national anthem in support of human rights protests in their home country.

Also notable from that game was the lack of the “One Love” band on England captain Harry Kane’s arm. Kane and several other European captains had planned to wear the bands in support of inclusion. When FIFA told them doing so could result in on-field consequences, such as a yellow card, the players seemed to have dropped the idea and sparked more public criticism.

“I’m enjoying the games,” Lynch said. “But what goes on behind it does spoil it a bit.” 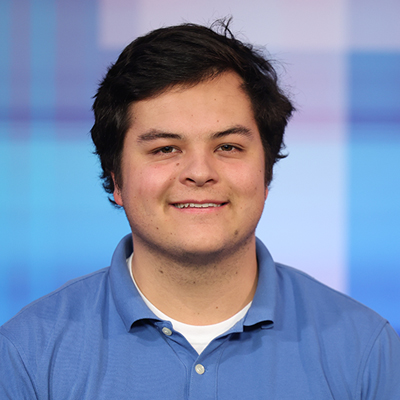 Ray Belkora expects to graduate in May 2023 with a bachelor’s degree in sports journalism. Belkora is president of Inferno Intel and has interned with OddsJam.