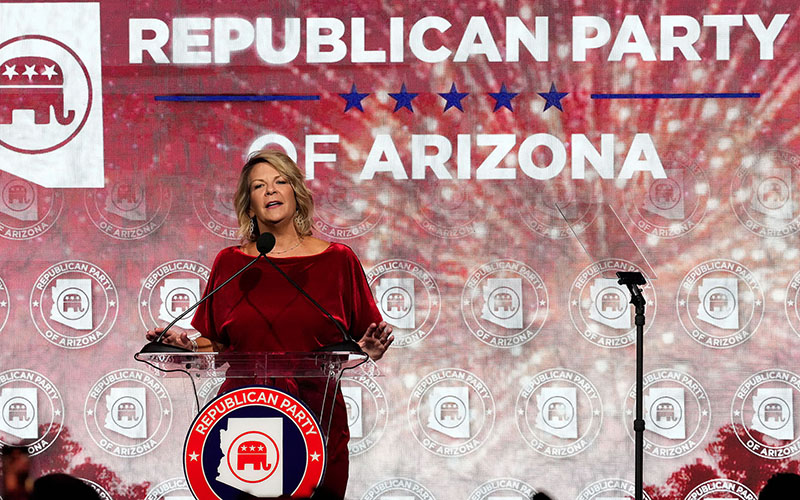 Arizona GOP Chairwoman Kelli Ward speaks at a post-election party in Scottsdale last week. The Supreme Court on Monday said Ward has to comply with a House committee subpoena seeking her phone records as part of its investigation into the Jan. 6 attack on the Capitol. (Photo by Ross D Franklin/AP/Shutterstock)

WASHINGTON – The Supreme Court said Monday that Arizona Republican Party Chairwoman Kelli Ward has to comply with a subpoena and turn over her phone records to the House committee investigating the Jan. 6th insurrection.

Ward had argued that the House Select Committee Investigating the January 6th Attack on the United States Capitol was not interested in finding evidence about the riot, but was merely looking to shame Republicans in her phone contacts who may not have had anything to do with Jan. 6. That would chill their right to free political association, she said.

Ward and her husband, Michael, who are both doctors, also claimed that the subpoena would expose their patients’ medical records.

Lower courts disagreed, ordering the Wards to turn over the documents. The Wards appealed to the Supreme Court, and Justice Elena Kagan on Oct. 26 stayed the lower courts’ rulings and ordered the committee to respond, which it did on Oct. 28.

The court, without comment, lifted that stay Monday, allowing the lower courts’ orders to take effect. The brief order came over the objections of Justices Clarence Thomas and Samuel Alito.

But her attorney said the order was not a complete loss. Alexander Kolodin said the fact that the court considered the appeal was “obviously sending a warning shot to policymakers, right, who would think about using their position to come after Americans for who they choose to associate with politically.”

“That’s evidenced by the fact that the two justices actually said that this case met the extraordinary requirements for a first stay. And I think you usually don’t get justices saying that separately unless they mean to send a message,” Kolodin said.

Officials with the committee did not respond to requests for comment Monday. In its response to the Wards’ claims, however, the committee said the subpoena was only seeking information on who called and when, and for how long, but not “any information regarding what the participants spoke or texted about.”

It said the phone records it was seeking from Nov. 1, 2020, to Jan. 31, 2021, are needed to “shed light on how Dr. Ward contributed to the multi-part effort to interfere with the peaceful transition of power.”

Besides being an active denier of the 2020 election results, both Ward and her husband put their names on an alternate list of Trump presidential electors sent to Washington that claimed to be the rightful slate of electors for the state.

Ward’s activity earned a subpoena from the committee this year – along with several other Arizona officials, including failed secretary of state nominee Mark Finchem.

Ward was deposed, but invoked her Fifth Amendment right to refuse to answer, according to a panel of the 9th U.S. Circuit Court of Appeals. It cited the committee’s attempt to get information from Ward through the “less-intrusive method” of an interview as one justification for upholding the subpoena for the phone records.

Monday’s action by the Supreme Court may not be the end of the legal fight.

T-Mobile, which is also subject to the subpoena, has pushed back against delivering the Wards’ phone records because of the potential for exposing patients’ medical records. A federal district judge had upheld the subpoena, saying that the committee had agreed to narrow its scope.

But T-Mobile said last month that the judge was mistaken. It said in court filings that the district judge agreed that the subpoena “had not been narrowed to exclude records involving telephone numbers associated with Dr. Kelli Ward’s medical patients.” But the judge also said that she could not take any action as long as the case was on appeal to the Supreme Court.

T-Mobile informed the Supreme Court last week that if the justices lifted the stay, it would ask the 9th Circuit to send the case back to the district court for clarification on the scope of the subpoena.

That comes as the Jan. 6 committee has just weeks to conclude its report, before Jan. 3 when it is disbanded.