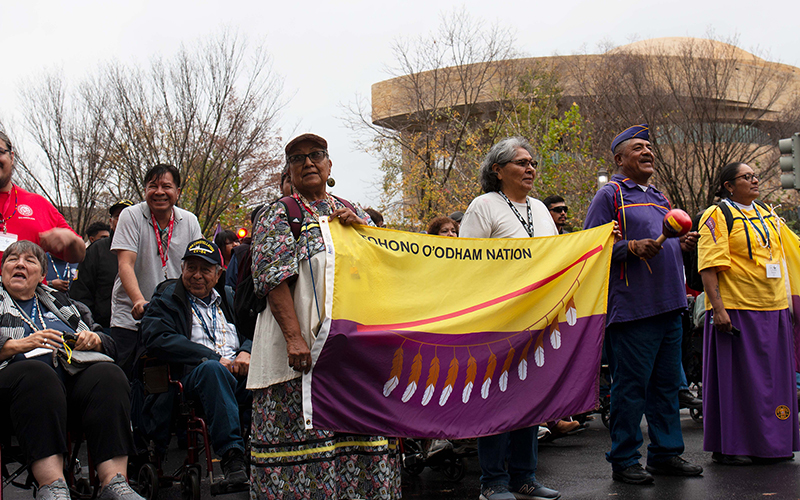 Veterans from the Tohono O’odham Nation were just some of the Arizona tribes represented at the Veterans Day dedication of the National Native American Veterans Memorial in Washington. Native Americans serve in the military at a much higher rate than other groups. (Photo by Tori Gantz/Cronkite News) 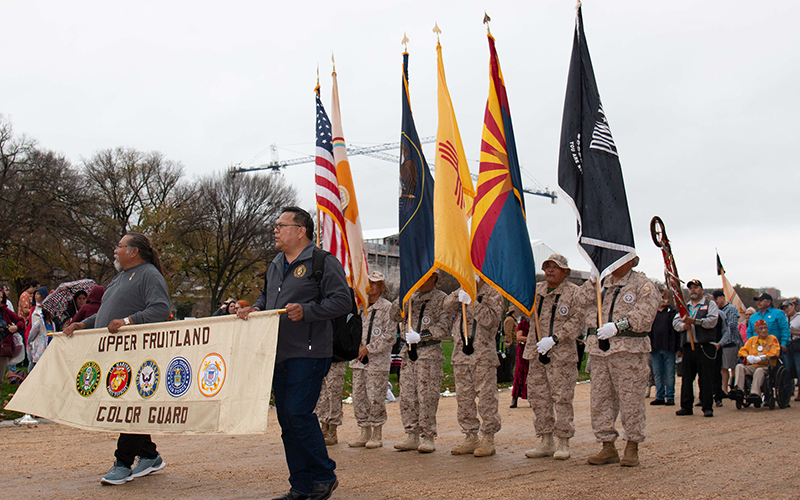 A military color guard from Upper Fruitland in the Navajo Nation marches as part of the dedication ceremony for the National Native American Veterans Memorial in Washington. The 51 Native vets from Arizona on hand for the event were among 1,500 from across the country who turned out. (Photo by Tori Gantz/Cronkite News) 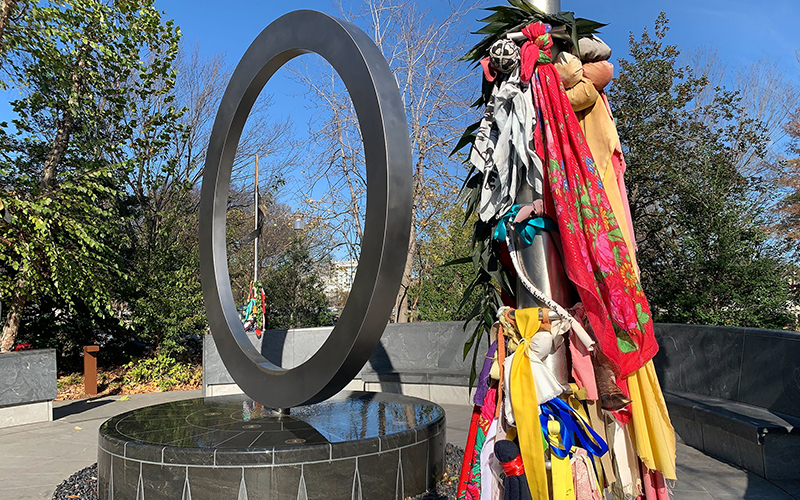 The National Native American Veterans Memorial is a stainless-steel ring on top of a stylized stone drum with falling water. Around the memorial site are benches for visitors as well as four poles representing lances, where people are invited to tie prayer cloths. (Photo by Ryan Knappenberger/Cronkite News) 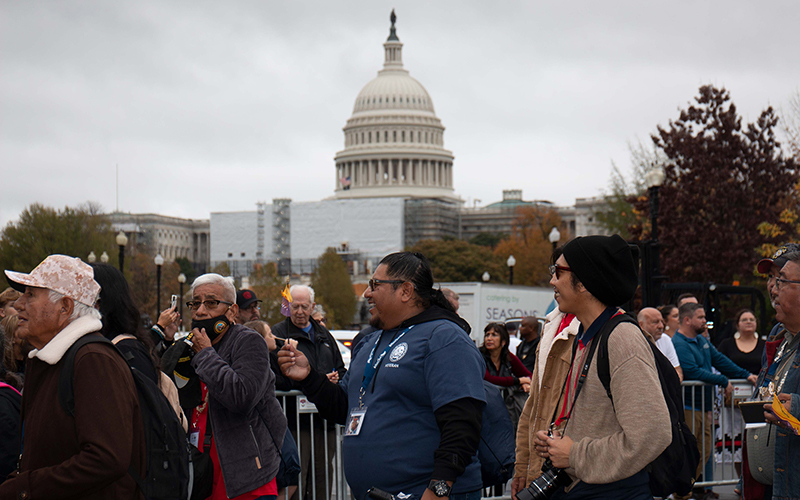 Marchers walk from the National Museum of the American Indian toward a stage at the Capitol for speeches and performances. It was all part of the formal dedication ceremonies on Veterans Day for the National Native American Veterans Memorial in Washington. (Photo by Tori Gantz/Cronkite News) 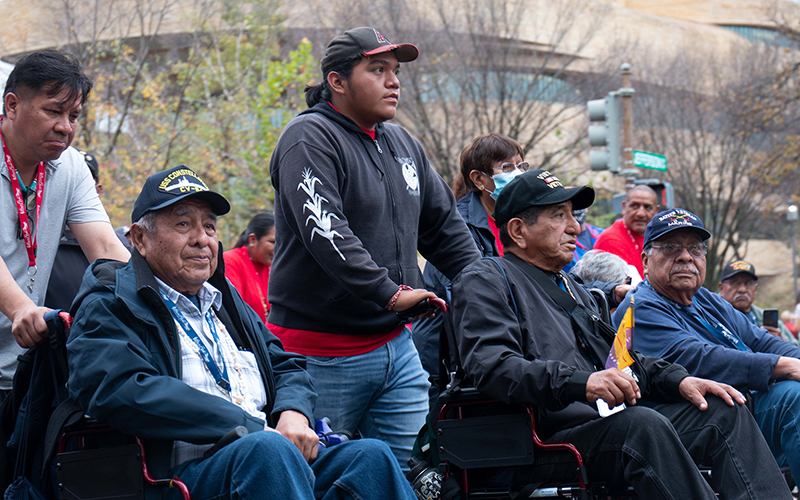 Michael Chiago Sr., a member of the Tohono O’odham Nation and Vietnam veteran, in center wheelchair at a march to dedicate the National Native American Veterans Memorial. Chiago, who is also an artist, said the trip also gave him a chance to view art in the National Museum of the American Indian. (Photo by Tori Gantz/Cronkite News)

WASHINGTON – Arizona veteran Darryl Blaine laughed and waved to onlookers as he marched toward the National Mall on Veterans Day, surrounded by fellow Native American vets and his family members from the Tohono O’odham Nation.

“This is where the cool people are!” Blaine, a Marine Corps veteran, shouted over the drums and the cheering crowd. He was one of 51 Native veterans from Arizona – part of a contingent of 1,500 from across the country – on hand for the formal dedication of the National Native American Veterans Memorial.

“This is something all Natives should be proud of, whether they served or they didn’t,” Blaine said. “We’re here for all of them.”

A sometimes-heavy rain could not dampen the spirits of the marchers, who ranged from the remaining Navajo Code Talkers of World War II to veterans of more recent wars. The procession, hosted by the National Museum of the American Indian, was filled with veterans in uniform and in traditional clothing, carrying tribal and military flags to a stage just across the street from the U.S. Capitol.

After speeches and performances there, they returned to dedicate the National Native American Veterans Memorial, a stainless-steel circle placed on a carved stone drum surrounded by water. The installation is surrounded by four lances, placed around the memorial, where visitors can tie cloths for prayer and healing, according to the museum’s website. 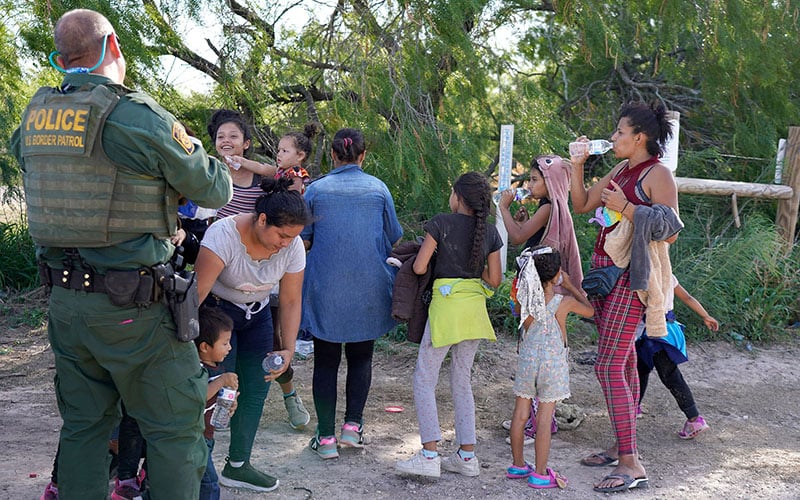 'You never forget': Honoring Arizona's veterans one flight at a time

The memorial has been open since Veterans Day of 2020, but the pandemic delayed dedication ceremonies until this year.

Blaine could be easily spotted in the procession, not just because of his dark blue University of Arizona hat and bushy gray mustache, but also because of the big smile he flashed to groups spread along the procession’s path.

He said the day’s festivities were not about “being better than anyone,” but were a chance for Native American veterans to gain the respect they deserve and to give respect to those who came before him.

And there is a long line of Native Americans who have served.

According to the USO, Native Americans serve at five times the national average and have served in every major conflict since the Revolutionary War, including the 29 Navajo Code Talkers in World War II. Since 9/11, around 19% of all Native Americans have served in the U.S. military, compared to 14% for all other ethnic groups in the country, the USO said.

Harvey Pratt, the artist who designed the memorial, has said he was inspired by healing ceremonies that Indigenous soldiers went through after their service. On any other day, the memorial is a quiet, contemplative garden setting just off the National Mall.

Michael Chiago Sr., a member of the Tohono O’odham Nation, said the chance to be a part of the procession and see the new memorial was something he never imagined he could see with his own eyes.

“It’s something not everybody experiences, to come down for this event,” said Chiago, a Vietnam veteran who is also an artist. “It’s exclusive to just be a part of it, just to be here.”

But for Chiago, the excitement began before the profession, when, he got to walk around the museum and its exhibits for the first time. He said that he does watercolor art, so it was especially exciting to see a wide range of media from all sorts of Native American artists. 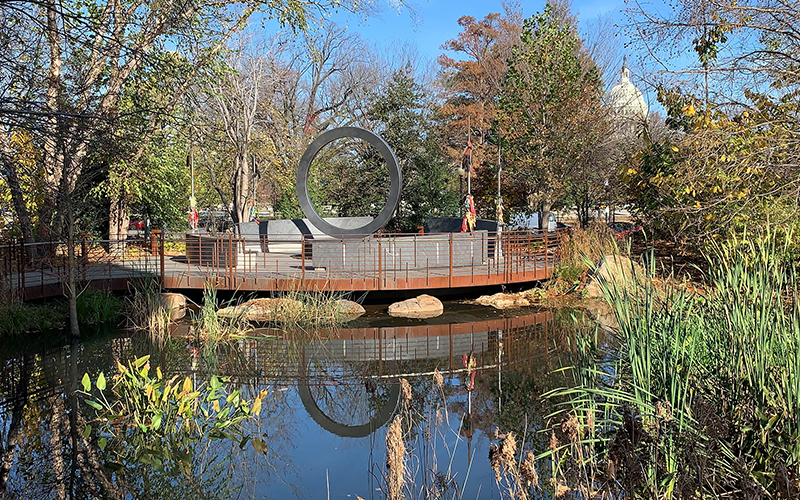 Even though it sits just yards from traffic on the busy National Mall, the National Native American Veterans Memorial is surrounded by trees and water, creating a quiet, contemplative space for visitors. (Photo by Ryan Knappenberger/Cronkite News)

“To see them recognize native artists is so exciting,” Chiago said, watching a group of people dressed in traditional wear pose for a picture. “It makes me really glad to be here today.”

For Blaine, the museum is a testament to Native American history all under one roof, something you can’t find anywhere else in the country.

“Seeing how far back we go and how far back our traditions go, seeing all the people here today, it makes me proud as a Native American,” Blaine said.

He and the other veterans flew to D.C. as part of an Arizona Honor Flight, a charity that flies veterans to visit the memorials erected in Washington in their honor. Last week’s flight was scheduled specifically to participate in the National Native American Veterans Memorial dedication.

Honor flights began flying nationally in 2005, with local “hubs” around the country. Flight costs are covered by donations made to the hubs, so that veterans can make the trip at no cost to themselves. The Southern Arizona hub has flown more than 1,000 veterans to Washington since 2011, with this weekend marking the 31st flight, according to a press release on the organization’s Facebook page.

While Friday was dedicated to honoring their role as Native American veterans, group members said they were also excited to be able to see the other memorials to their service, honoring them as just veterans.

“I’d like to be able to say I was here, to be able to share this with my family and friends and show them this is what we’re taking part in,” Blaine said.