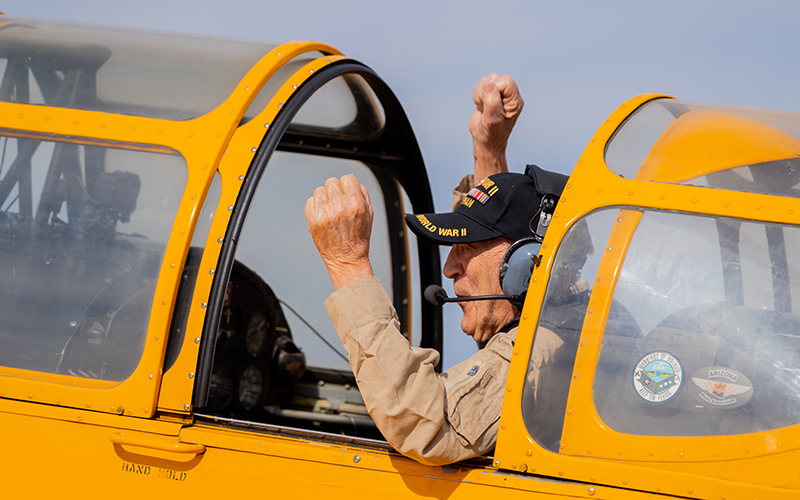 Centenarian Ted Giannone raises both hands in the air as he lands at Falcon Field Airport in Mesa on Oct. 30 after becoming Grounded No More’s 500th rider since 2016. (Photo by Samantha Chow/Cronkite News) 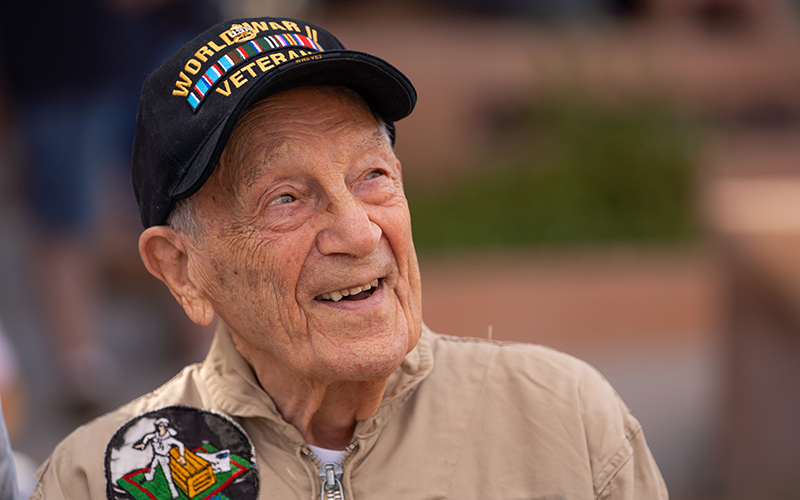 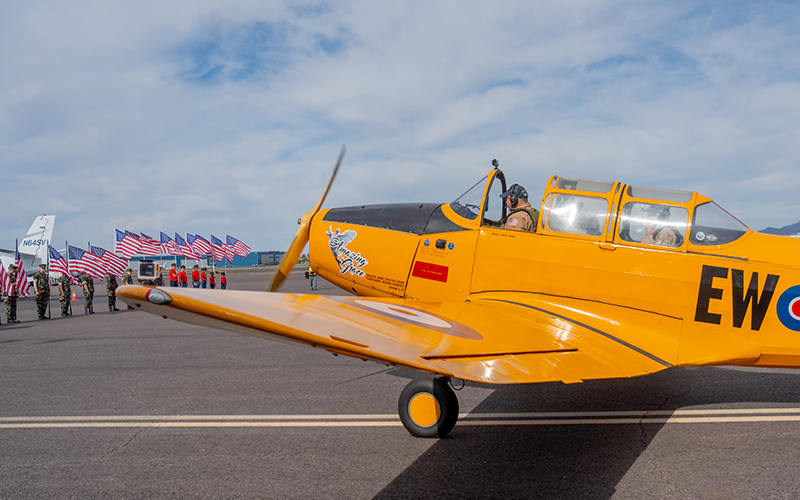 Grounded No More founder Tony Anger prepares to take off with Ted Giannone in the back of Anger’s Fairchild PT-26 trainer “Amazing Grace.” (Photo by Samantha Chow/Cronkite News) 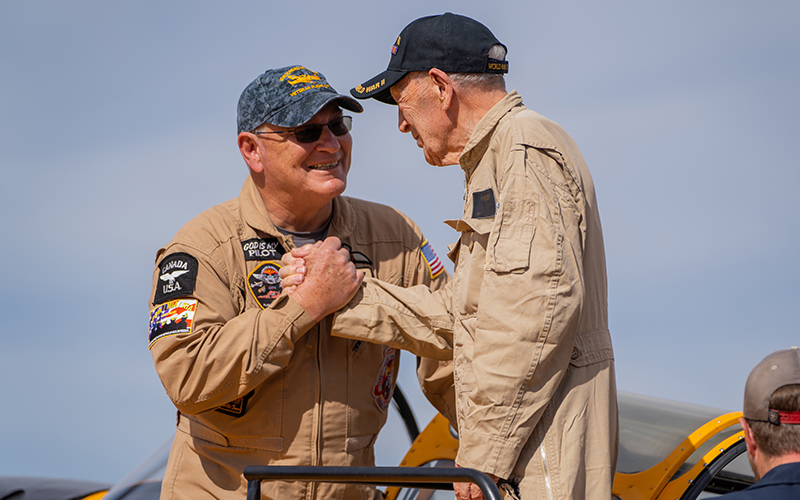 Tony Anger and Ted Giannone shake hands after a 30-minute flight over east Mesa and the Superstition Mountains. (Photo by Samantha Chow/Cronkite News)

For 30 minutes, Tony Anger, owner and founder of the Mesa-based nonprofit Grounded No More, flew Giannone around east Mesa and the Superstition Mountains.

Since 2016, he has flown hundreds of veterans on such “honor flights” free of charge, with support from donations.

Grounded No More was an “accidental ministry,” as Anger puts it.

While working for the Commemorative Air Force at Falcon Field, which offers public rides in vintage warplanes, Anger met a young man who wanted to fly in a B-17 to honor his grandfather, who flew a “Flying Fortress” in World War II.

“It was a great story right up until he went to pay,” Anger recalled. “The lady said, ‘Thank you, that will be $425. … If you’ve ever been in the military, you know that $425 is probably what you take home every month.”

Instead, Anger offered to fly the man in his Fairchild – dubbed “Amazing Grace” – for free. 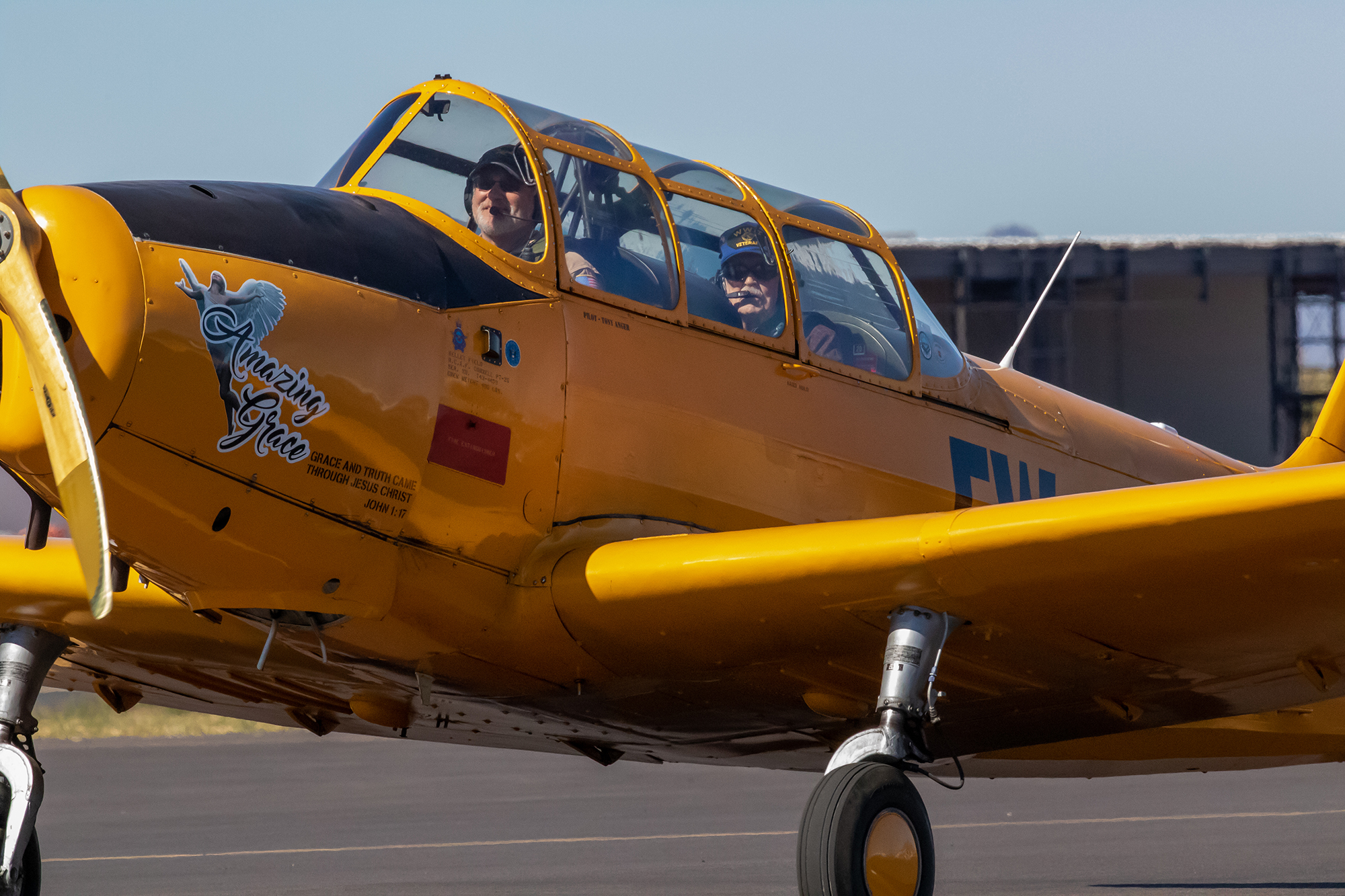 After a conversation with his wife, Karen, Anger started Grounded No More and began taking veterans on honor flights in 2016.

Earlier this year, while Anger was checking the log books, he noticed the organization was approaching its 500th flight.

“We were looking specifically for somebody special for our 500th ride,” Anger said.

That’s when he heard about Giannone.

In 1940, shortly after he was eligible to enlist, Giannone joined the Navy as an aircraft mechanic and gunner on a TBF Avenger torpedo bomber. He served about 30 years, active duty and Navy Reserve combined, and worked for the aerospace company Grumman as a field-based administrator building the lunar module.

On Oct. 30, he added another honor to the list: Grounded No More’s 18th World War II veteran and fourth centenarian to take an honor flight.

Dozens of people gathered at Falcon Field Airport to support Giannone and Grounded No More.

“All of this is so unbelievable,” Giannone said. “And for a guy like me? I’m just a guy, nothing special.”

That statement was quickly followed up with disagreements among the crowd.

Like many veterans Anger flies, Giannone hadn’t been in a military plane in years.

“One thing I’ve noticed about these veterans, especially the older ones, they get up in that airplane and they’re slow getting in,” Anger said, “but when they jump out, they’ve gone from 100 years old back to an 18-year-old.”

And, sure enough, Giannone landed with a mile-wide grin and both arms in the air.