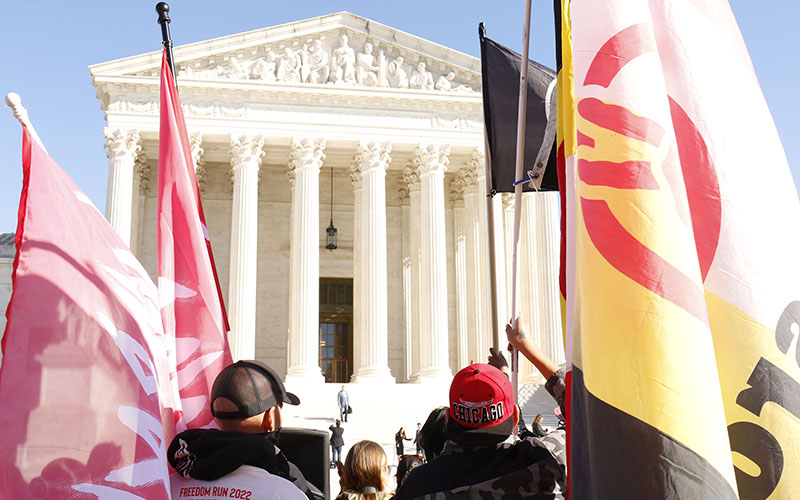 Protesters hold flags of different tribal nations and various Indigenous groups outside the Supreme Court, where justices on Wednesday listened to more than three hours of arguments on the Indian Child Welfare Act. (Photo by Ryan Knappenberger/Cronkite News) 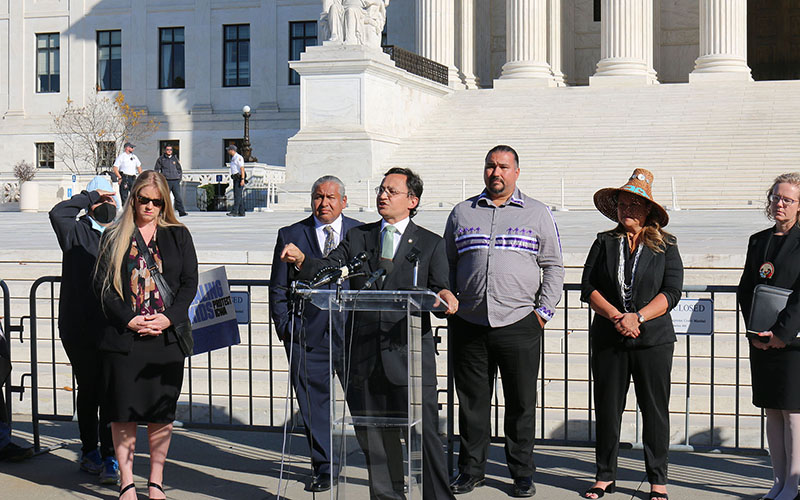 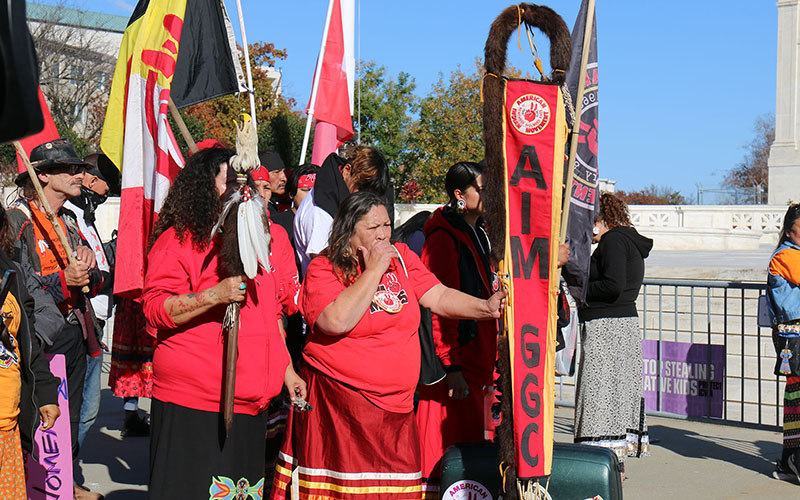 Protesters sang and prayed outside the Supreme Court Wednesday in support of the Indian Child Welfare Act, which was passed in 1978 to address the history of separating Indigenous children and families. (Photo by Ryan Knappenberger/Cronkite News) 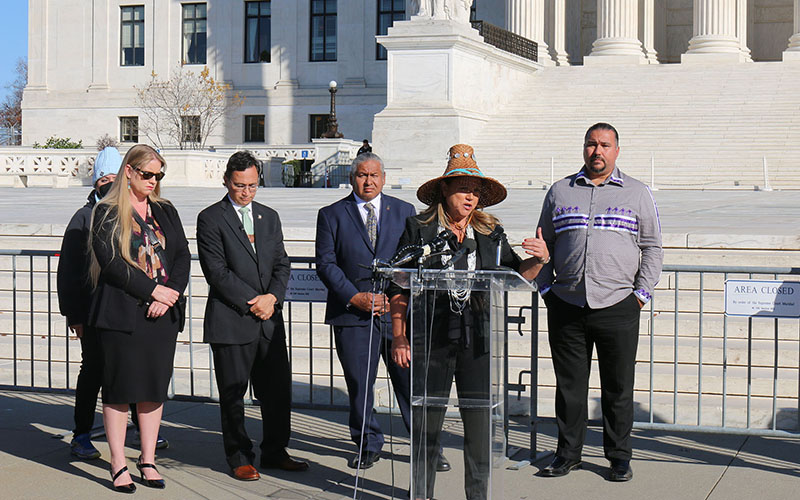 National Congress of American Indians President Fawn Sharp said that if the Supreme Court finds the Indian Child Welfare Act is based on race, not political affiliation, it would erase 200 years of precedent in tribal law. (Photo by Ryan Knappenberger/Cronkite News)

WASHINGTON – Over the course of three hours Wednesday, the Supreme Court grappled with whether a law meant to keep Indigenous children with Native American families should be overturned as racist and unconstitutional, as critics charge.

Tribal leaders called the debate over the fate of the Indian Child Welfare Act “agonizing,” and said that the possibility of overturning the 44-year-old law would echo centuries of “efforts by this country to stamp out our culture.”

Cherokee Nation Principal Chief Chuck Hoskin Jr. said that overturning ICWA would “create instability and chaos all throughout the country.” While he is cautiously optimistic the court will uphold the law, Hoskin also warned supporters to “remain vigilant” after years of broken treaties and unfavorable court decisions.

ICWA was enacted in 1978, at a time when 24-35% of Native American children were being removed from their families and placed in non-native homes, according to the National Indian Child Welfare Association. It was passed in response to the federal government policy of the 19th and early 20th centuries that removed many Native children from their families and put them in remote boarding schools, separating them from their history, language and culture. 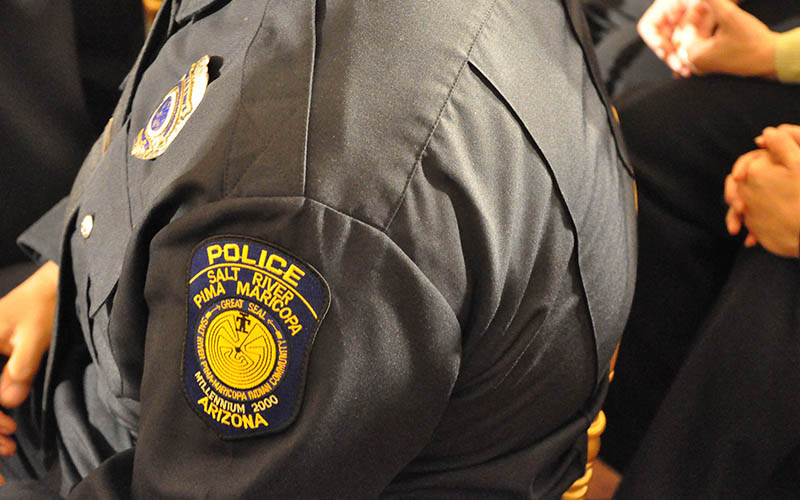 The law requires state foster care agencies to make special efforts to place Indigenous children with a relative or a family in their own tribe or another Native American tribe. It also gives tribes the right to intervene in foster care and adoption cases that involve a child of the tribe.

Child advocacy groups and state officials routinely call it it the “gold standard” of child welfare legislation. Briefs urging the court to uphold ICWA have been filed by the Navajo Nation, 497 other tribal governments, 24 states, including Arizona, and the District of Columbia.

But critics argue that the law impermissibly uses race as a factor, making race more important than what is in the best interests of the child, the standard in any other child welfare case.

“The Indian Child Welfare Act … deprives Indian children of the best interests of the child test. It replaces that test with a hierarchy of placement preferences that puts … non-Indian families at the bottom of the list,” said Matthew McGill in arguments Wednesday to the Supreme Court.

McGill is the attorney for Chad and Jennifer Brackeen, a Texas couple who sued to overturn ICWA after their attempts to adopt a Navajo child were almost derailed by the law.

Their case was joined by Texas, Louisiana and Indiana, who argued that despite the law’s good intentions, it “commandeers” states and intrudes on state courts’ authority to handle child welfare cases.

Several justices appeared skeptical of that argument, with Justice Ketanji Brown Jackson noting that the federal government has historically held the right to deal with tribes, not states.

“The background principle of all of this was that states were getting involved in Indian affairs, and the Constitution says, no, Congress is the one that gets to direct it,” Jackson said.

“I don’t understand why, wrapped up in that authority isn’t Congress’ authority to direct the states to stay out of the way, or to do whatever it is that’s necessary to ensure that Indian affairs, Indian sovereignty is protected?” she asked.

But other members of the court wrestled with the question of whether the law is racially based and, if so, if that’s legal. Justice Brett Kavanaugh noted that the law gives preference to a tribal placement, even if the foster family is from another tribe, over placement with a non-Native family.

Other justices agreed with supporters of the law that it is based not on race, but on tribes as political entities.

“We have a long history of cases where we’ve understood legislation relating to the tribes as political in nature, and not as racial,” Justice Elena Kagan said.

She and Jackson said that Congress was within its rights to pass ICWA because it saw the protection of Native children as critical to the survival of tribes as sovereign nations.

“I mean, Congress said things like, ‘There’s no resource that is more vital to the continued existence and integrity of Indian tribes than their children,'” Jackson said. “They constantly cast regulations regarding children, Indian children, as a matter of tribal integrity, self-governance, existence.”

That was echoed by protesters who rallied outside the court.

“If they rule that we are not a political group, but a racial group, that wipes out 200 years of precedent,” said National Congress of American Indians President Fawn Sharp after Wednesday’s arguments.

Alethea Phillips, a member of the Omaha Tribe of Nebraska, wants to preserve ICWA to keep others from going through what her family has had to go through.

“My grandfather was taken to a boarding school, my father was taken away from his family … they knocked my grandma’s door down,” said Phillips, lead organizer at Native Youth Alliance. “After my mother died, I was taken in violation of ICWA.”

She said she was placed with a white family in Michigan whose “Christian daughter told me I was going to hell every day,” and she was told she could not practice any of her tribal traditions. She said the fear that the same thing could happen to other children if ICWA is overturned is what brought her to Washington to protest.

“That was the worst year of my life,” Phillips said. “It’s not something I would wish on anyone.”