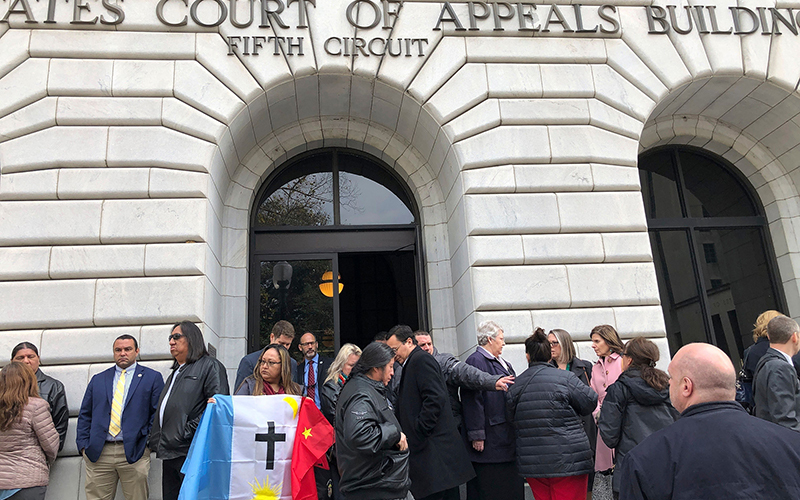 Rosa Soto Alvarez of Tucson holds the Pascua Yaqui flag outside the federal appeals court in New Orleans after it struck down parts of the Indian Child Welfare Act in 2021. Supporters call the act the “gold standard” of child welfare laws, but critics call it racist. (Photo by Kevin McGill/AP/Shutterstock)

WASHINGTON – The Supreme Court will consider Wednesday whether the Indian Child Welfare Act is the “gold standard” of child welfare policy or a “outrageous and unconstitutional” law that has outlived its time.

The 1978 law, which requires states to give Native American families priority over non-Native families when it comes to placement of an Indigenous child, is being challenged by a Texas couple whose adoption of a Navajo foster child was delayed by the law.

But supporters – including 497 tribes, Arizona and 23 other states and the District of Columbia – argue that the law is needed to help protect Native American culture after generations in which children were separated from their families and traditions. They worry that if the challenge is successful, more children will grow up missing a part of themselves.

“I’ve listened to adult adoptees talk about their experience of being adopted out of their culture and their tribe … their identity has been stolen from them,” said David Simmons, director of government affairs for the National Indian Child Welfare Association.

NICWA says when the law was enacted, 24-35% of Native American children were being removed from their families. The law gives tribes the right to intervene when citizens are involved in a child welfare case and requires states to take special consideration to maintain a child’s connection to their tribal culture. 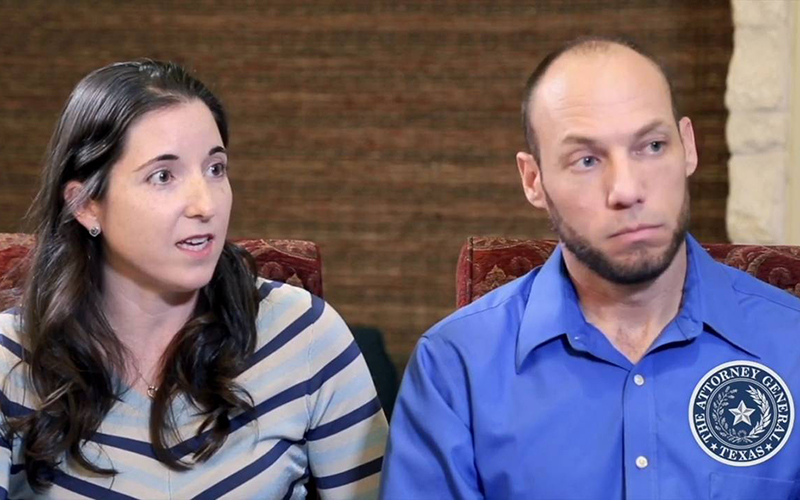 But while child advocacy organizations call it “gold standard,” an official with the Goldwater Institute said it should be called the “fool’s gold standard” because it harms Native children more than it heals.

“ICWA actually takes away the rights of Indian children and makes their situation worse than the situation for children of any other race,” said Timothy Sandefur, Goldwater’s vice president of legal affairs.

Goldwater has filed a brief in support of the Texas couple, Chad and Jennifer Brackeen, whose case is being is being pursued by Texas, Louisiana and Indiana.

The Arizona Department of Child Safety reported that there were 957 Native American children in the state’s foster care system as of September, in addition to 56 aged 18 to 20. All of those in DCS custody would be subject to the law requiring placement with a Native family before aging out of the system.

Sandefur argued that the law was unconstitutional for two reasons: It makes determinations based on race and “commandeers” the states to enforce federal law.

“This is a law that differentiates between Indians and non-Indians en masse,” he said. “And that’s a racial distinction.”

A federal district judge agreed with the Brackeens and the other plaintiffs in 2018, ruling that the law improperly gave racial preference to Native Americans over other races.

But the 5th U.S. Circuit Court of Appeals reversed that ruling in 2019, ruling in an exhaustive decision that striking the law down infringed on tribal sovereignty.

Simmons agreed with the appeals court but took the argument a step further, calling the legal challenge a thinly veiled attempt to strip away the rights of tribes.

“They’re just trying to turn back the clock to a time when the federal government and state governments could just run roughshod over tribes and their people so they could have access to their land, their resources,” Simmons said. “They could essentially subjugate them.”

Sandefur said there’s no way to predict how the court will rule in any case, especially in one regarding tribes. But he said that if they do decide to overturn ICWA, he believes they will do so on the narrowest basis possible.

“It’s conceivable that the court could declare ICWA unconstitutional on the basis of commandeering and just leave the race issue alone,” Sandefur said.

He said that would leave room for more states to create their own version of ICWA, along with the 10 states who have already enacted one. Arizona does not have its own law but defers to the federal statute.

But if the Supreme Court decides to rule ICWA unconstitutional on racial grounds, Sandefur said, it could mean the end of any similar program.

Simmons said he hopes it does not come to that, and the court upholds the law. If it comes down with a broad ruling based on race, he said, that would be the worst-case scenario for both tribes and Native families.

“If we were to begin losing our children again … some of the smaller tribes are probably at risk of being able to continue to have members to even lead their communities,” Simmons said.