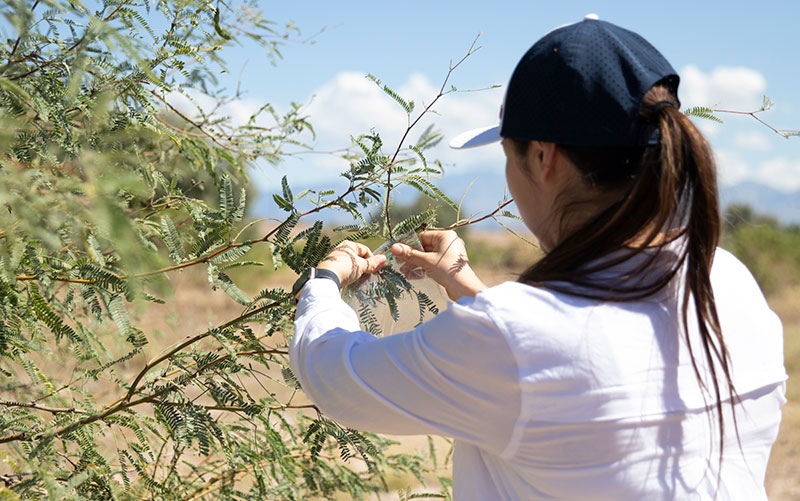 Tying a plastic bag to a green leaf in the sun will create condensation. After a few hours, there should be water in the bag that’s safe to drink, according to instructors with Educating Children Outdoors. Photo taken Oct. 1 at a survival class in Marana Heritage River Park. (Photo by Sophie Oppfelt/Cronkite News) 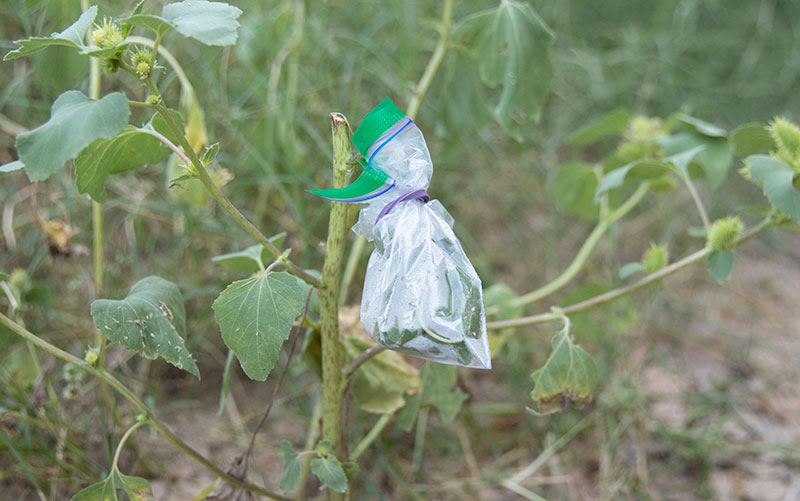 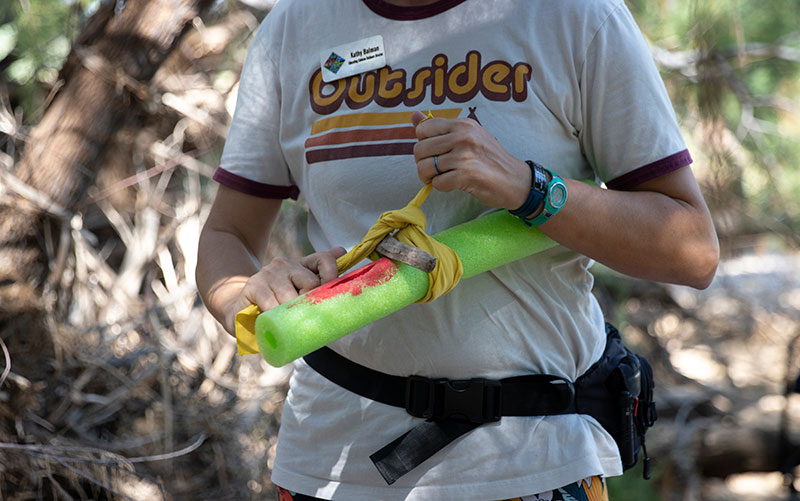 Kathy Balman of Educating Children Outdoors demonstrates a tourniquet. Using a piece of cloth, tie a knot around the wounded limb, get a stick and tie another knot on top of it to secure it to the cloth. Then, twist the stick to slow the bleeding. (Photo by Sophie Oppfelt/Cronkite News) 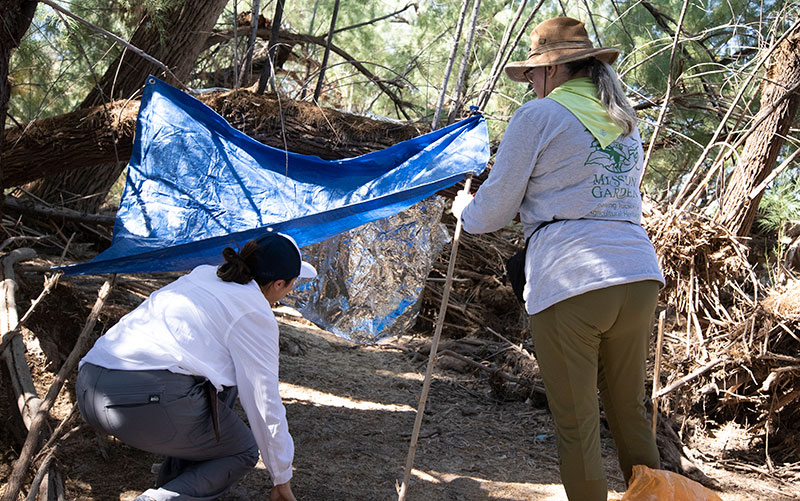 If you’re stranded and need to create a shelter, use a tarp or build one against a tree or bush using leaves and sticks. Shelter is essential to protecting yourself from the weather or animals. (Photo by Sophie Oppfelt/Cronkite News) 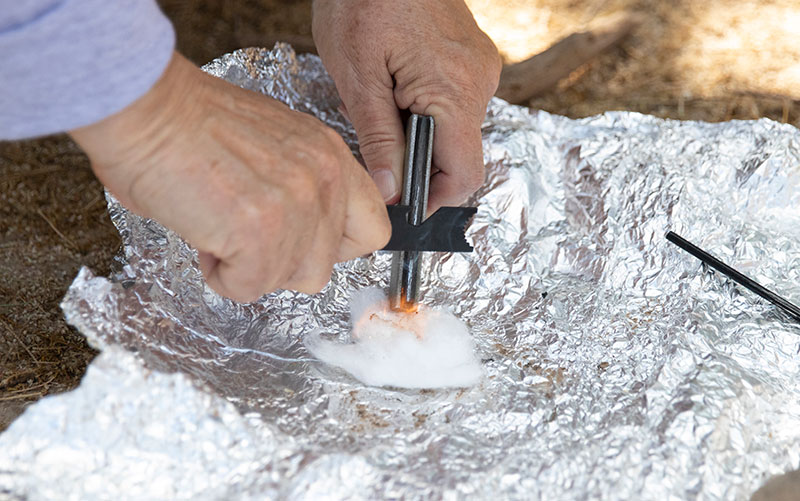 Bringing multiple methods to start a fire, such as a flint and steel, is important for outdoor excursions. Striking the flint against the steel creates a spark that will ignite bits of fabric or a cotton ball, which can be used to set wood on fire. (Photo by Sophie Oppfelt/Cronkite News)

PHOENIX – Arizona’s greatest attractions include jaw-dropping landscapes and warm desert sun. But if people aren’t prepared for the state’s extreme climate, it can lead to death.

The Maricopa County Department of Health’s annual report on heat deaths, which was released this month, reports a record 339 heat-associated deaths in 2021. Of those, 75% took place outdoors, and 19% of those happened on hiking trails or in desert areas of the county.

“The majority of these deaths actually occurred on days where there was not an excessive heat warning,” said Ariella Dale, public health scientist at the county health department.

Heat-associated deaths can start as early as April and end as late as October, Dale said. June through August are the deadliest months.

Rising temperatures aren’t confined to Maricopa County. Temperatures across Arizona have risen about 2.5 degrees Fahrenheit since the beginning of the 20th century, according to the 2022 Arizona State Climate Report. The report, compiled with data from the National Oceanic and Atmospheric Administration, also found that the first 21 years of this century have been the warmest period on record for the state.

To avoid heat-related illnesses outdoors, the most important thing to do is prepare, said Kathy Balman, founder, director and environmental educator for Educating Children Outdoors, which offers a wide range of nature courses. The organization, which moved to Arizona in 2019, has created 11 programs for kids in three counties, and it recently started survival-skills programs for adults.

Among the things to keep in mind, Balman said, are to dress appropriately and wear long sleeves to help regulate body temperature, let others know where you’re going and always stay hydrated. 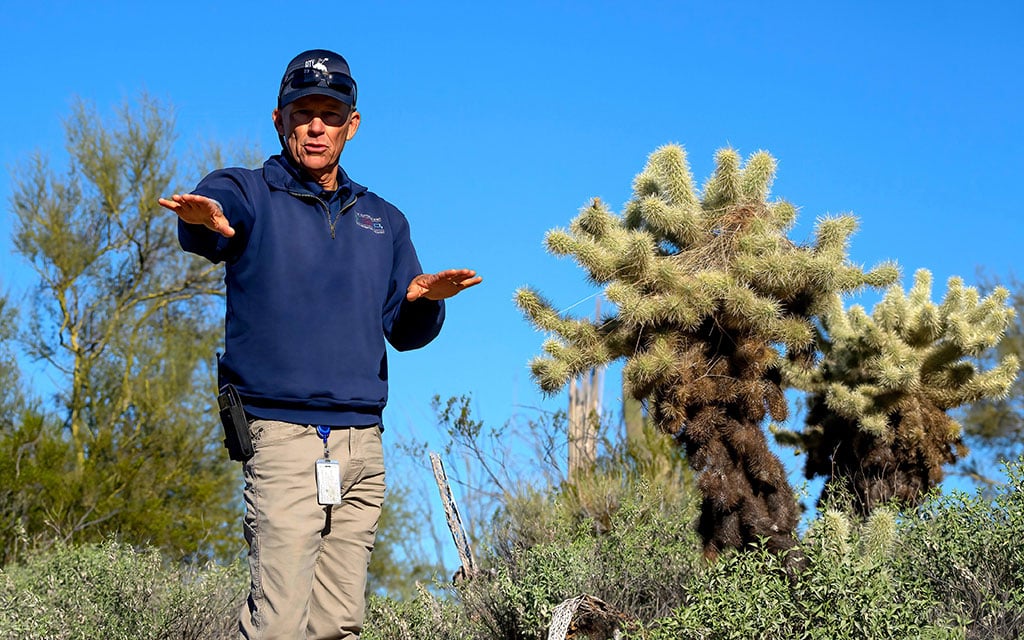 “Consider what the temperature is going to be that day,” Dale said, “and recognize the signs and symptoms of heat-related illness. So if anyone within your group is experiencing muscle cramps, headaches, vomiting, is no longer sweating, or has a rapid heart rate, make sure that you are seeking medical care immediately.”

Michelle Thompson, chief of communications and public information officer at Arizona State Parks and Trails, which preserves and protects state parks, said certain state parks, including Picacho Peak and Lost Dutchman, “tend to see more rescues than others.”
Most of these rescues involve Arizonans who think they can handle the heat, she said, and out-of-towners who don’t understand the dangers of Arizona’s climate.

“Definitely bring more water than you think you would need and turn around once you’ve reached half of your water,” Thompson said. 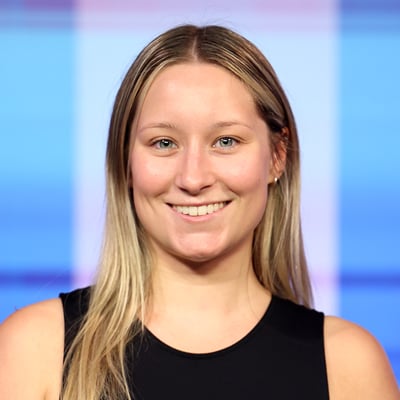 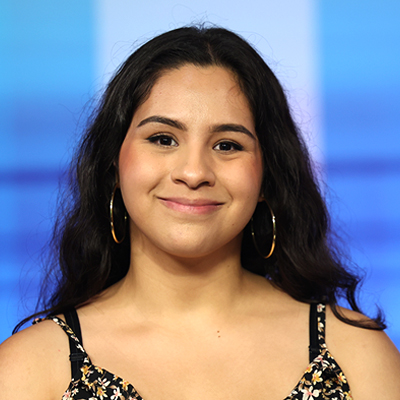