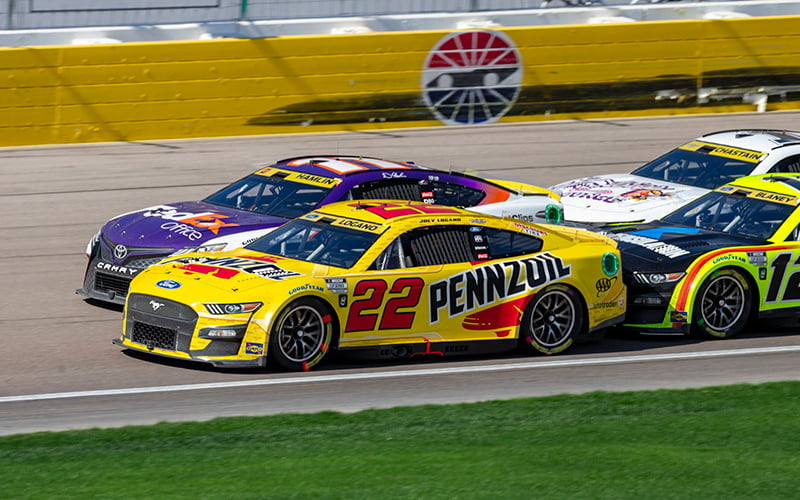 Joey Logano and his 22 car are nudged by Ryan Blaney during a restart of the NASCAR Cup Series Playoff South Point 400 at Vegas Motor Speedway. Logano won and secured an automatic berth in the championship race Nov. 6 at Phoenix Raceway. (Photo by Larry Placido/Icon Sportswire via Getty Images)

LAS VEGAS – Sunday’s largest jackpot in Sin City was not won on the strip, but instead in the South Point 400 at Las Vegas Motor Speedway – and it came with a side of chaos.

Joey Logano won Sunday’s Round of 8 race in the NASCAR Cup Series Playoff, securing himself a spot in the Championship 4 at next month’s NASCAR Cup Series Championship at Phoenix Raceway. If Logano wins the title in three weeks in Phoenix, Sunday’s finish could go down as a cornerstone moment in the future Hall of Fame career of the Team Penske #22 car driver.

“We’ll see if we win the championship, then I’ll say it’s a pretty important race, but I definitely think it puts us in a good spot,” Logano said. “We got a one-in-four chance now, I feel like our chances are better than that. I do think it will be interesting to see how the next two weeks are like.”

There's something special about winning the first race of the Round of 8. #NASCARPlayoffs pic.twitter.com/Dc4W0Q5kuR

A poor pit stop for Logano’s pit crew led him from second place to 10th as the field went green with 35 laps to go. While that isn’t a death sentence by any means, the former champion more than likely wouldn’t have seen victory lane had the race went green to the end.

Luckily for Logano, two late race cautions changed the entire race. With 27 laps remaining, Daniel Suarez spun out to bring out the caution. The No.22 car was sitting in ninth and caught a massive break.

Logano’s crew chief Paul Wolfe made the call for four fresh tires, a major risk depending on who would follow suit. Logano was the first car down pit road with the entire field behind him coming as well, leaving only the lead nine cars out on the racetrack with older tires.

The race went green for the final time with 16 laps to go, and Logano restarted in eighth with the freshest tires in the top 10. It only took him two laps to get up to third, but a battle for second place with Chase Briscoe gave Ross Chastain a chance to build a 1.2-second lead with 10 laps to go.

Logano worked his way around Briscoe, and while Chastain looked primed to cruise to Phoenix, he wasn’t gonna let this opportunity slip through his hands.

“Initially Ross got out to a pretty good lead,” Wolfe said, “I wasn’t totally sure how long it would take, once our front-tire pressures came up in our new tires, and his tires got hot, I didn’t feel like it was a challenge, honestly. Eight laps is quite a difference in tire advantage. Although (Chastain) was up there, I didn’t look at him as one of the stronger cars today. He was good, but he wasn’t one of the stronger cars in my opinion. I thought his teammate was actually faster than he was.”

With six laps to go, Logano caught up to Chastain. For the next four laps, Chastain and Logano would battle it out, with Logano emptying his bag of tricks and Chastain holding onto the golden ticket for dear life.

“It’s everything I’ve ever dreamed of,” Chastain said when asked about racing with high stakes. “I’ve watched my heroes and icons of this sport do this, and you know, I just want a chance.”

Approaching two laps to go, Logano finally got his way around Chastain and secured the checkered flag.

With Logano locked into the Championship 4, three spots remain to be claimed. If the season ended today, Ross Chastain, Chase Elliott and Denny Hamlin would qualify in that order on points. William Byron, Chase Briscoe, Ryan Blaney and Christopher Bell now sit on the outside looking in, in that order.

Bell DNF’d Sunday after getting caught in the nasty wreck between Bubba Wallace and Kyle Larson. Wallace appeared to intentionally spin Larson, causing a potentially dangerous situation and costing his Toyota teammate, Bell, a chance to earn more playoff points.

Wallace exited his car, approached Larson and threw a few shoves at the 2021 champion, displaying his displeasure with how Larson raced him leading up to the wreck. Wallace took to Twitter Monday night to reflect and apologize about the incident.

Prior to Sunday’s race, Davante Adams of the Las Vegas Raiders drove the pace car and also made time to name his favorite drivers in the sport while attending his first NASCAR race.

“I gotta say Kyle (Busch), Kyle is up there right now,” Adams said. “I love all of them. Bubba as well. The guys that I’ve talked to and got a chance to meet and spend a little time around, those are usually the guys that I root for whether it’s football or basketball. It’s always about the relationship.”

With two races remaining before the championship, the field will head to Homestead and Martinsville, where the final three spots in the Championship 4 will be decided ahead of the finale at Phoenix Raceway on Nov. 6. 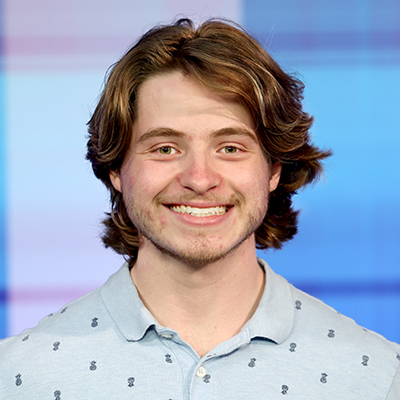