By TJ L’Heureux/Special for Cronkite News 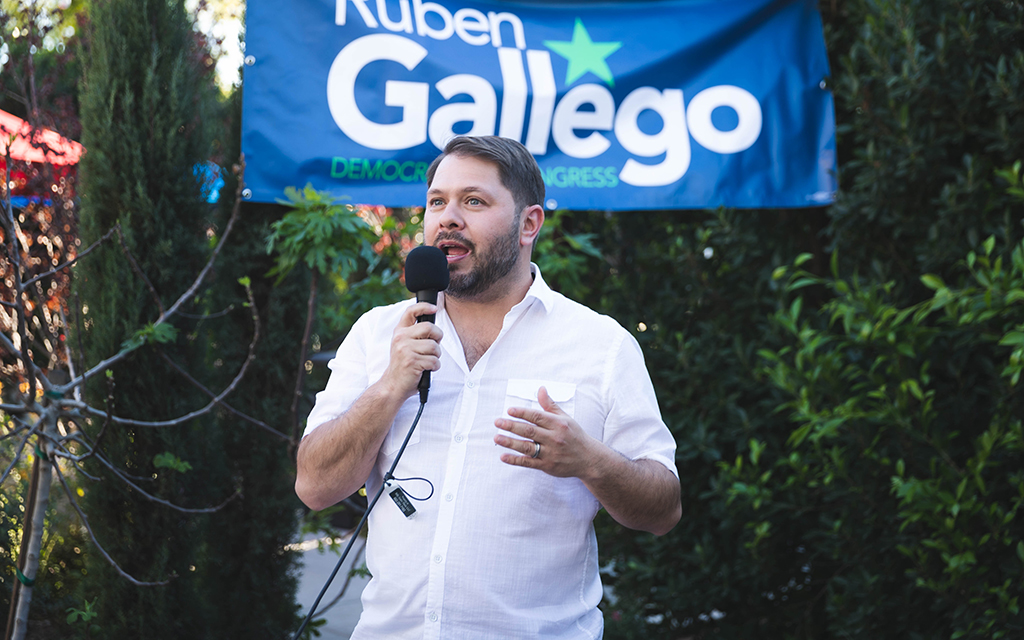 Even for a congressman, Ruben Gallego has a lot going on.

During his four terms representing Phoenix and Glendale in the House, Gallego has chaired two subcommittees, become a father, been a vocal critic of the Trump administration and written a book about his experience fighting in the Iraq War. He is seen as a rising star in Democratic politics and has reportedly been weighing a primary challenge to Sen. Kyrsten Sinema in 2024.

But for now, Gallego’s focus is on the Nov. 8 election and the next Congress. He faces Republican Jeffrey Zink in the race for Arizona’s newly drawn 3rd Congressional District. It’s similar to the old 7th District, which Gallego won with at least 74% of the vote in four general elections.

He said his proudest accomplishment as a member of Congress was passing $32 billion in aid for tribal governments during the COVID-19 pandemic, legislation that saved lives in “communities that have been rejected and ignored for years.”

Before winning election to the U.S. House in 2014, Gallego was a member of the Arizona Legislature. He served in the Marine Corps from 2002 to 2006; in 2005 he was deployed to fight in Iraq. After his discharge, Gallego moved to the Valley and got involved in politics. He was elected vice chair of the Arizona Democratic Party in 2009.

Gallego spoke via Zoom about his campaign, his tenure in Congress and his political priorities.

Gallego said he’s proud of the work he’s done in Congress. “I’ve been able to pass a lot of bills that really help Arizona, whether it has to do with water, education or Native American tribes,” he said.

He also cited his service as former chairman of the House Indigenous Peoples subcommittee and current chair of the Intelligence and Special Operations subcommittee as important work in Congress.

“There’s a lot of work I’ve done that is really beneficial to the constituents of Arizona, and I’m going to continue pushing forward on that,” he said.

“I come back to my district every weekend. I shop in my district. You’ll catch me at the grocery store like anybody else,” Gallego said. “I think because of that, I really have a good sense of what’s happening in my district, which helps me make good decisions for them.”

As a four-term congressman, he also said he has the seniority and experience that help get bills passed.

“For example, just a couple months ago, I was able to bring $1.5 million for a veterans’ homeless shelter (in Phoenix). These are the types of programs you get to do the longer you’re in Congress and the more relationships you build.”

Q: What are the major issues you see facing Arizona?

Caring for the homeless population and addressing the lack of affordable housing are key issues for metro Phoenix, Gallego said.

“It’s partly finding immediate housing” for people who are unsheltered, he said.

“A lot of it is also dealing with the opioid addictions and SMI (serious mental illness). We also need to build more housing, whether it’s subsidized or affordable housing.”

Immigration reform also is needed, he said. In addition to a just process for dealing with the influx of asylum seekers, there should be a path to citizenship for undocumented immigrants to “bring 11 million people out of the shadows,” he said.

Climate change is another concern. The recently passed Inflation Reduction Act is a good start, he said, but more action is needed to mitigate climate change and conserve water.

Gallego is known for his fiery social media presence and approach to politics, which some view as combative. Gallego said he prefers the term “outgoing.”

Still, he said he’s happy to work across the aisle. He said he teamed up with a Republican on the Intelligence and Special Operations subcommittee to pass an annual defense budget and with an Iowa Republican to pass a bill that gives veterans free access to the National Park Service.

But Gallego said he doesn’t see bipartisanship as an end goal.

“What I don’t do is let the process be more important than the policy. I’d rather get something done for the people of Arizona than be able to have some symbolic gesture that’s a half-measure but at least I can say it’s bipartisan. I think that’s just political theater.”

He noted that his job will be harder if Republicans win the House in November.

Gallego chuckled and suggested that the question of election security can be interpreted in different ways. He said he trusts the professionals and volunteers who run elections and count ballots but worries about potential violence by extremists at polling places.

“All these laws that are being passed are ridiculous and are going to disenfranchise voters when we’ve had perfectly sane, moderate voting laws on the books here. Everything right now that they’re doing is not designed to bring more election integrity. If anything, it’s designed to suppress voters, and I think that’s not the intent of our founding fathers.”

“Work-life balance matters. I have a son and a wife who I want to make sure I spend time with. I also have a job that I am very dedicated to, and I have to make sure that I can do both very well.”

Gallego offered some advice he learned in the Marines. Although the advice is about war, he said it translates to everything else: “Anything worth shooting once is worth shooting twice.”