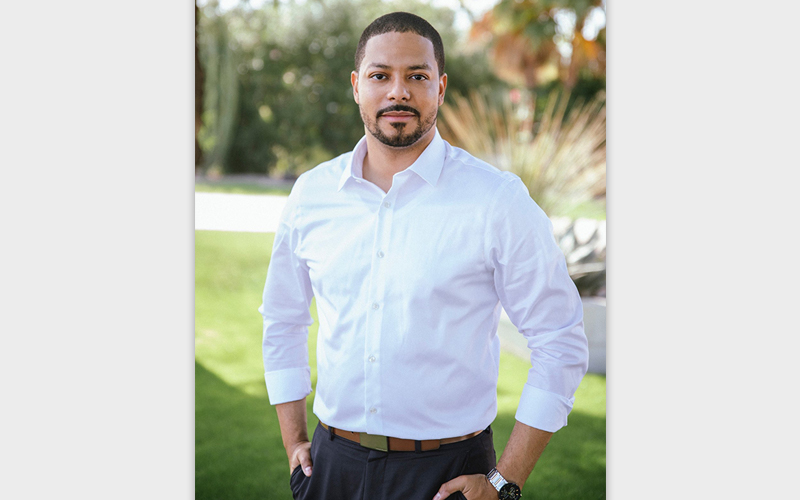 “I’m a young Black man running for the United States Congress who grew up without wealth,” Hodge said.

On Sept. 21, the Cook Political Report moved the race from leaning toward Schweikert to being a toss up.

Hodge is the son of Berdetta Hodge, who, in 2016, was the first Black woman elected to a public office in the city of Tempe.

“We were on food stamps, and I didn’t have a car until I was a sophomore in high school,” Hodge said. “I went off to college at one of the nation’s top universities on a Pell Grant. My story’s not different than most Americans, but if you work hard, you can get ahead.”

He is president of the Booker T. Washington Child Development Center, the longest-running head start school in Arizona. He also is the national engagement director for LINK Strategic Partners, a Washington, D.C., marketing firm. He previously was an executive with the Manifesto Project, which analyzes political party policy positions.

Q: What should the state or federal government do to mitigate the ongoing drought and address Arizona’s water issues?

Solving the water crisis, he said, starts on the consumer end, with people taking steps to reduce their water usage. New technologies and creative ideas also are needed.

“Imagine if we can put solar panels over (local) canals to offset the power usage into surrounding areas?” he asked. That would “limit the amount of water evaporation and create diversity in our energy intake and output.”

“The issue with immigration on the border as a whole is that we are trying to solve a 21st-century problem with 19th-century solutions,” he said, “and what we need to do is focus on being creative and innovative and bringing our solutions and thinking to the 21st century.”

He said new investments are needed in technologies that “support local enforcement on the ground.”

He also has publicly supported comprehensive immigration reform that provides a path for people to enter the country legally.

Hodge said he and his younger brother, Jazin, grew up in a single-parent household that relied on food stamps and lived in subsidized housing. He got through college on grants and loans and has worked full time throughout the campaign to support himself.

“I start at a disadvantage because I don’t have family members I can go to and ask for $5,000 apiece to help me get my campaign off the ground like other people running for Congress,” he said. “So I have to do this and do it from square one and completely start at the very bottom.”

“Arizonans are hurting, and the economy is hitting everyone right now,” Hodge said. “It’s about cutting costs for our Arizona families and cutting energy costs … and lowering the cost of medical (care). Medical debt is the No. 1 leading cause of bankruptcy in this country.”

Hodge said elections are safe, and voting needs to be made more accessible, not less.

“I believe and support the elected officials who are managing and running our elections,” he said. “I ran for the Maricopa County Board of Supervisors in my last race. Nearly 500,000 ballots were cast in that election in 2020. I lost by 403 votes, less than 1/10 percent, and I didn’t claim fraud. I didn’t blame the election officials.”

Hodge said he will focus on three things: economic innovation, K-12 education and support for families.

“I want to ensure that every child in this country has a high-quality early childhood education opportunity,” he said. “It’s economically advantageous.”

He also wants to reinstate the child tax credit as a way to economically support families. The credit, he said, would lift more than 50% of families in poverty out of crisis.

“If my family, for example, had received the child tax credit when my brother and I were kids, we might have had a car and put more food in the fridge,” he said. “We would have been able to live a completely different life than we do now.”

“God gave you two ears and one mouth for a reason. Unfortunately, most people don’t take enough time utilizing their two ears, and many like to speak with their ears and mouth,” Hodge said.

“What it comes down to is learning the individual. You can disagree with somebody 99% of the time, but if you find that 1% of things you do agree on, you can come to a solution that will deliver for the American people.”

Q: What in your past work, political, or volunteer experience makes you the best candidate?

Hodge pointed to his experience in early childhood education and with Tempe Union High School’s Education Foundation, a nonprofit that helps to raise money to benefit schools. He would bring that experience to bear in Congress, he said, “working to improve the quality of education nationally.”

He also brings an ability to listen and learn from others, he said.

“I interact with a lot of people on a day-to-day basis,” he said. “I try to leave a positive mark on any place I go, no matter what the other individual is doing or saying.”

Q: Please share a quote or advice you live by.

Hodge said he tries to keep in mind something his mother used to tell him: “Your fingerprints never fade from the lives you touch.”