By Caitlin Thompson/Special for Cronkite News 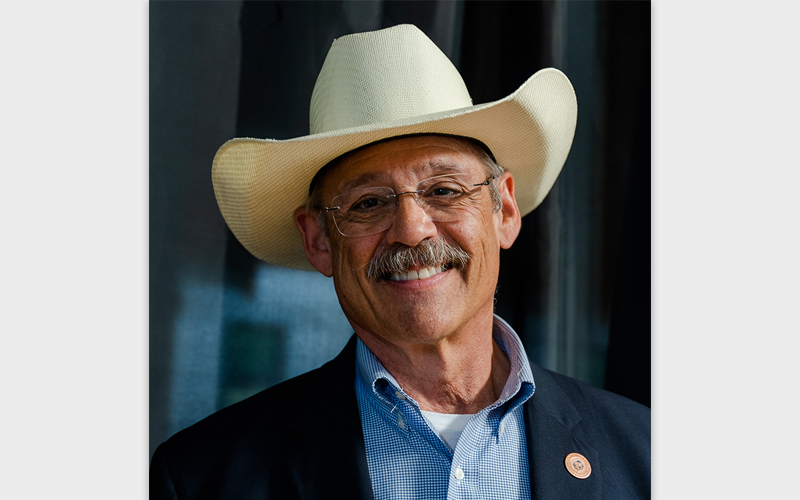 State Rep. Mark Finchem has repeatedly denied the results of the 2020 presidential election and was present at the Jan. 6 insurrection at the nation’s Capitol. Now he’s running for office to oversee Arizona’s elections.

In a Sept. 22 debate aired on Arizona PBS between the Republican legislator and his opponent, former Maricopa County Recorder Adrian Fontes, Finchem said he’s running for the post to “restore honor, restore integrity, restore security to the secretary of state’s office.”

Finchem, who is backed by former President Donald Trump, has repeatedly pushed election disinformation casting doubt on the results of the 2020 presidential vote, despite the fact that Arizona Attorney General Mark Brnovich, a Republican, found no evidence of widespread fraud or irregularities, and a 2021 audit of Maricopa County votes by a firm called Cyber Ninjas confirmed that Joe Biden won. The U.S. House of Representatives’ Committee on Oversight and Reform concluded that after six months and nearly $7 million dollars spent, “Cyber Ninjas’ final audit report failed to find any fraud, contrary to the conspiracy theories from the audit’s backers.”

During the Arizona PBS debate, Finchem referred to the debunked movie “2,000 Mules,” which claims to show evidence of voter fraud.

“You have people taking ballots, harvesting ballots, stuffing them into ballot collection boxes that are unsupervised.”

Finchem introduced a resolution in the Legislature in February to decertify the 2020 election results. The Legislature does not have the power to do this, according to legal experts who spoke to Politifact.

Finchem is part of the America First coalition, a group of secretary of state candidates in races across the country who believe the false narrative that the 2020 election was stolen from Trump, according to The New York Times.

In a June campaign event in Chandler with Republican gubernatorial candidate Kari Lake, Finchem stated he will not concede this election, Axios reported.

“Ain’t going to be no concession speech coming from this guy. I’m going to demand a 100% hand count if there’s the slightest hint that there’s an impropriety,” he says in a video of the event.

In April, Finchem and Lake filed a lawsuit that would require ballots in the 2022 general election to be counted by hand rather than electronically. The suit claims that electronic vote counting “created unjustified new risks of hacking, election tampering.” A federal judge threw out the suit in August, but Finchem and Lake are appealing, according to The Associated Press.

Finchem declined to be interviewed for a Cronkite News story. The following information is drawn from public records and public statements he has made.

Finchem, a self-proclaimed member of the Oath Keepers, a far-right extremist group, was outside the U.S. Capitol on Jan. 6, and he was subpoenaed by the House select committee investigating the attack. According to the subpoena, Finchem was in touch with the organizers of the “Stop the Steal” movement before the attack, and he was scheduled to speak Jan. 6 at an event on the Capitol steps.

In a statement released by his office five days after the insurrection, Finchem said he was in Washington, D.C., to present Vice President Mike Pence with “key evidence of fraud in the Arizona presidential election” and ask him to “consider postponing the award of electors” until there had been an audit of the vote in Maricopa County. Finchem said he did not speak at an event at the Capitol that day.

During the Arizona PBS debate, Finchem publicly confirmed for the first time that he did meet with the Jan. 6 committee. After the debate, he told reporters that he was at the Capitol to give U.S. Rep. Paul Gosar, R-Prescott, evidence of fraud in the 2020 election, according to ABC News.

As a member of the Arizona House, Finchem has repeatedly tried to change the state’s voting laws. He introduced about 20 bills related to election procedures, according to Vote Smart and Legiscan, including bills that sought to limit early voting, restrict mail-in ballots and prohibit ballot drop boxes in big cities.

Finchem also sponsored legislation requiring ballots to be counted by hand instead of using electronic tabulators, echoing claims that voting machines are insecure, despite the fact that Homeland Security’s Cybersecurity and Infrastructure Security Agency found no evidence that voting machines had been exploited in the 2020 election, according to The Washington Post. Finchem and several of his Republican colleagues also introduced a bill that would give the Legislature the power to reject election results.
Voting record

During his time in the Legislature, Finchem has embraced a conservative line on issues such as abortion, immigration and policing. He voted to allow people to buy a gun without a background check, to bar transgender female students from playing on girls’ sports teams and to prohibit the teaching of critical race theory in public schools.

Trump endorsed Finchem in September 2021, and the two have held several rallies together, according to CNN. Former national security adviser and QAnon believer Michael Flynn also has expressed support for Finchem, according to the candidate’s Twitter.

Finchem first took office representing Oro Valley near Tucson in the Arizona House in 2015. He has been re-elected three times and is now in his fourth and final consecutive term, due to Arizona’s term limits.

Originally from the Detroit area, Finchem previously worked as a public safety officer in Kalamazoo, Michigan, before moving to Arizona in 1999, according to Politico. Before joining the Legislature, Finchem worked in real estate.

Finchem had raised more than $1.2 million for his campaign by mid-July, according to the Arizona secretary of state’s campaign finance portal. His opponent, Adrian Fontes, had raised a little over $700,000. Finchem’s campaign spent more than $50,000 at Mar-a-Lago, a resort in Palm Beach, Florida, owned by Trump, for undisclosed purposes.