By Alex Appel/Special for Cronkite News 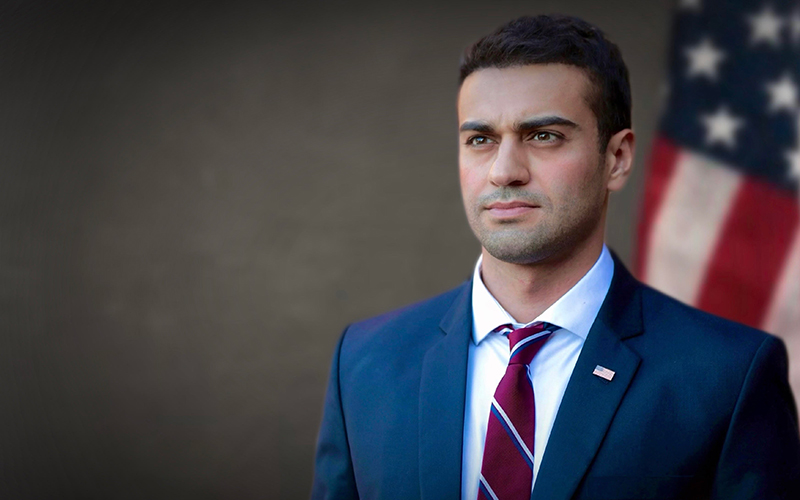 When Abraham Hamadeh returned home to Arizona in 2021 after serving with the Army in Saudi Arabia, he was struck by how much things had changed.

“In many ways, I no longer recognized our country. It was just seeing the wide open border, this fentanyl crisis that is coming in and the crime on our streets. And it happened so quickly.”

As the Republican candidate for state attorney general, Hamadeh, who denies the result of the 2020 presidential election, is campaigning on promises of increased border security, crackdowns on illicit fentanyl smuggling and support for law enforcement. He faces former Arizona Corporation Commissioner Kris Mayes, a Democrat.

A recent poll by the Trafalgar Group shows Hamadeh leading Mayes by 9 points. A separate poll by Global Strategy Group shows the candidates in a dead heat, with each garnering 45% of the likely vote. Both polls consisted of about 1,000 likely voters and were conducted in mid-September.

Hamadeh’s campaign had raised a little more than $2 million by the end of June, while Mayes had raised about half that.

Hamadeh, who has been endorsed by former President Donald Trump, is an Army Reserve intelligence officer who worked in Saudi Arabia. Previously, he was an attorney with the Maricopa County Attorney’s Office.

He’s an outspoken critic of the Biden administration and what he calls “the leftist mob.”

“For too long, we’ve sat back as we’ve watched our country turn into a place we no longer recognize,” he says on his website. “While the left dominates every part of our lives, from sports and entertainment to business and government, and even education – the question we all should be asking is: Who let them? It’s the politicians, the status quo, the elite and those without a backbone who have surrendered to the leftist mob in hopes of being spared themselves, but in reality, you can’t reason with unreasonable people.”

He calls illegal immigration “an invasion” and said that he would target drug cartels that are bringing fentanyl crossing the border.

Although Hamadeh takes a hard-line anti-immigrantion stance, his father overstayed a visa by nearly seven years and was not in the U.S. legally when the candidate was born, according to The Arizona Republic.

The Republic said the information contradicts Hamadeh’s response to a question the paper posed earlier as to why his father faced a deportation order in 1996.

“Asked in August about that deportation order,” it said, “Hamadeh declined an interview with reporters but gave a written response to the Republic that said in part, ‘my parents proudly came to the United States LEGALLY in 1989 and were rewarded for waiting in line LEGALLY with U.S. citizenship in 2007 and 2009.’”

At 31, Hamadeh would be one of the youngest attorney generals in the country in more than three decades if elected.

In an interview, Hamadeh said it’s time for a fresh perspective.

“I don’t think we can (elect) the old guard who got us into this mess and expect them to get us out of it. I think it’s time for some new, bold leaders and some new blood and energy in there to shake things up.”

He blames Democratic immigration policies for contributing to lawlessness in this country.

“I think right now what we need is an attorney general who’s going to prioritize the things that matter most, which is safety and security. Without safety or security, there’s no prosperity.”

He said his experiences in the military and as a prosecutor set him apart from Mayes.

“As attorney general, you elect somebody who will uphold the law and defend our Constitution. As a prosecutor, I upheld the Constitution; as an Army officer and intelligence officer, I swore to defend it.”

“Fentanyl is the major issue because it’s not just going in our inner cities. It’s actually plaguing our suburbs.”
He said he would ask the Legislature to give the attorney general’s office the authority to take over any felony case brought in any county in the state.

On his website, he also rails against “the insanity of Big Tech, the ‘woke’ left corporations who boycott states and condemn America but refuse to utter a word against China, and against Washington’s overreach into the daily lives of Arizonans.”

Hamadeh said he believes it’s important to listen to other points of view.

“You may not come to an agreement … (but) maybe sometimes your view will change.”

However, he said he could not recall ever changing his views after talking with a Democrat.

Hamadeh has denied the outcome of the 2020 election. In April 2022, he tweeted, “My message to those who worked to rob President Trump in the rigged 2020 election: Your day of reckoning is coming when I take office January 2023.” The tweet included a photo of a pair of hands in cuffs.

My message to those who worked to rob President Trump in the rigged 2020 election:

Your day of reckoning is coming when I take office January 2023… #perpwalks pic.twitter.com/hTLOLehUZ2

He said his own experience in the 2020 election made him doubt the security of voting procedures. Because he was stationed overseas at the time, he was able to cast his vote via an electronic ballot, and he questioned the timing.

He also said that while he was overseas, several mail-in ballots were sent to his home but not addressed to him, which he said is proof the voter rolls aren’t up to date.

“Patience,” he said, especially when he feels attacked by the news media.

“All the negative attacks and all this stuff, it doesn’t matter. I have a friend of mine who has pancreatic cancer and he has two twins. …. There’s so much else going on in people’s lives. It’s taking that ability to take a step back and just put things in a bigger picture and from (a new) perspective. I think that sometimes requires some patience.”

Q: What can the AG’s office do, if anything, about border security? What steps would you take?

Hamadeh characterizes drug cartels as terrorists and said he would deploy the resources of the attorney general’s office to stop fentanyl from crossing the U.S.-Mexico border.

“We’re going to get a lot more aggressive.”

On his website, he concedes that border security is a national issue but insists he will “enforce state laws since the federal government refuses to take action.”

Q: Abortion rights are now largely in the hands of the states. How will the AG’s office enforce Arizona’s abortion laws if you are elected?

Hamadeh said he is “pro-life” but believes in abortion exceptions for rape, incest and threat to the mother’s life. However, he said he would enforce the law.

“Any attorney general should be in the business to enforce the law. The state Legislature exists for a reason.”