Is Pinnacle High’s Duce Robinson one of Arizona’s top recruits ever? 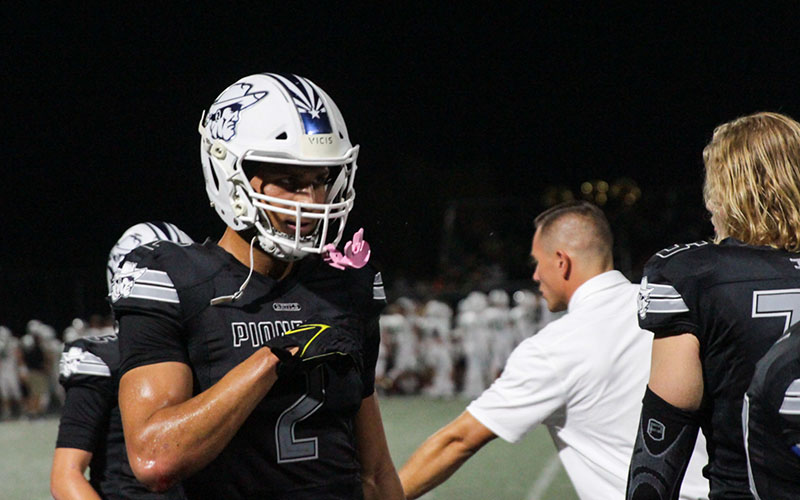 PHOENIX – On any given day, Duce Robinson can be found in the gym working on his hand-eye coordination, his vertical leap, his reaction time. His dedication and physical attributes are not his only eye-popping traits.

Arizona high schools have produced some of the most talented athletes in the country in recent memory. Hamilton, Chandler and Centennial are a few programs that consistently churn out talent, helping enhance Arizona’s reputation.

So has Pinnacle High. It was the first stop for Spencer Rattler and Nico Mannion as they emerged as two of the best recruits in the nation, with Mannion ranked No. 9 by ESPN in basketball and Rattler No. 29 in football.

Robinson, a 6-foot-6, 230-pound three-sport athlete from Pinnacle, could be next.

Robinson, a senior, plays football and basketball for the school. He plays club baseball as well but has yet to play for Pinnacle. A tight end on the gridiron and center fielder on the diamond, Robinson has multiple major college offers in both sports.

The consensus No. 1 player in Arizona and No. 1 tight end in the country by ESPN, Rivals and 247Sports, Robinson has been dubbed a generational prospect because of his physical attributes, athleticism and all-around skills on the field. Pinnacle football coach Dana Zupke praised the five-star recruit, calling him “the total package.”

“Duce’s physical attributes, combined with the way he can run and control his body, is what makes him who he is on the field,” Zupke said. “What makes him special is the inside stuff. He is the hardest working kid on the team. He lives in the gym and trains consistently.”

Zupke said Robinson’s biggest skills are his elusiveness and the ability to accelerate and run through defenders. Zupke, who has coached Robinson all four years at the varsity level, raved about his leadership skills.

“He leads mostly by example,” Zupke said. “He can be vocal, but is so energetic and has such a positive energy on the field. Off the field, too. He is such a high-character (guy), the kind of person who cleans up the field and weight room. And he is just a really unique individual.” 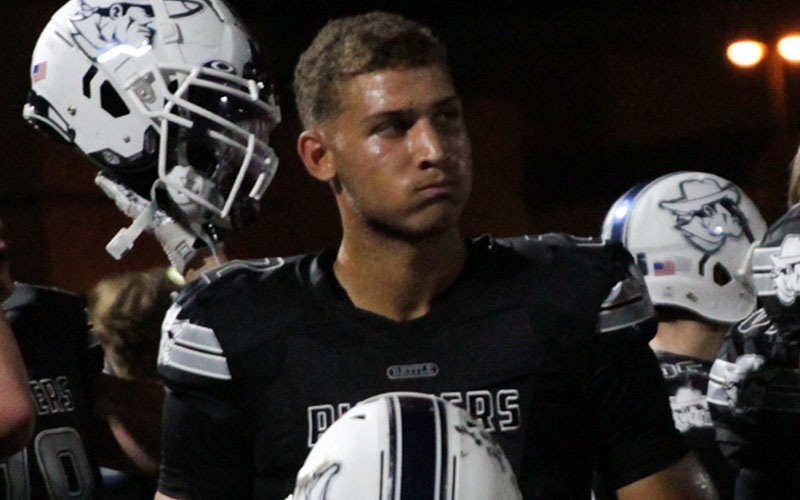 Duce Robinson “is the hardest working kid on the team,” Pinnacle coach Dana Zupke said. “He lives in the gym and trains consistently.” (Photo by Nikash Nath/Cronkite News)

Along with football, Robinson has played varsity basketball all four years at Pinnacle. His football offers include Alabama, Georgia, Oregon, USC and Texas. Although Robinson has yet to play baseball for Pinnacle (he is considering playing for them in spring), he has received multiple offers by playing with a club team, including from Oregon State, Arizona, California and more.

Charles Wilde, the Pinnacle basketball coach, has been Robinson’s varsity coach the past three seasons, and will be again this season. Even with a future in possibly both football and baseball, Robinson told Wilde early on that he planned on playing basketball all four years. Wilde praised Robinson as both a player and person.

“Duce fits in great on this team and fills his role perfectly,” Wilde said. “He mostly plays the four or five, but he is able to guard the one-through-five positions. He is an amazing athlete and dedicated player, and he has such a high IQ on the court.”

Robinson, who started on varsity as a sophomore, was second-team all-region his sophomore and junior years. Wilde said Robinson’s athleticism allows him to do everything. Elite speed and great hands complement his play. Wilde, like Robinson’s other coaches, loves his attitude on and off the court.

“You couldn’t have a nicer kid off the court,” Wilde said. “Duce lights up every room. He’s polite, and he is a better person than he is a player, which is saying a lot. He brought himself to be a mature leader and role model, and he acts that way both on and off the court.”

Robinson has come across as humble and grateful throughout the recruiting process, manners that stick as he progresses his way through Pinnacle. Playing three sports exceptionally well can be tough, but Robinson has been able to be among the best of the best.

“It’s such a blessing that I’ve been so highly thought of by so many different people,” Robinson said. “It’s a blessing to be ranked so highly, and I just try to do my best everyday to help my team out. I want to play both (baseball and football) for as long as I can until something tells me I can’t anymore.”

Robinson said a lot of college programs have supported the possibility of playing both sports. He even received a baseball offer before getting a football offer. Robinson, who grew up mostly playing baseball and basketball, played some 7-on-7 football, but didn’t put on pads until high school.

Robinson hails from a strong line of athletes. His father played both football and baseball at Florida State, and seeing that drove Robinson to want to emulate his dad – and possibly surpass him. Robinson is excited for his future, and knows whichever university lures him will get his best possible version.

“I’m going to bring my all, bring my best day in and out,” Robinson said. “And whatever school I end up going to, I promise they will get the best out of me.”

Robinson’s freshman season went as expected for a first-year player trying to work his way up the depth chart. He finished with four catches. In his second season he began to show glimpses of greatness and caught 27 passes for 347 yards and two touchdowns. Robinson broke out on a national scale his junior year, finishing with 60 catches for 972 yards and eight touchdowns.

Through Pinnacle’s first four games this season, Robinson already has 19 catches for 426 yards and six touchdowns.

Robinson’s performance in his team’s season-opening win over El Camino High from Oceanside, California showcased his skills as a deep threat. He finished with six receptions for 148 yards and two scores.

He somehow one-upped that performance two weeks later in a win over Queen Creek, finishing with five catches for 139 yards and three touchdowns. Robinson tacked on six more receptions for 120 yards and a touchdown in his team’s most recent performance, helping the Pioneers to a 3-1 start. Pinnacle plays on the road this weekend against 4-1 Valley Vista.

Richard Obert, the high school sports insider for The Arizona Republic and azcentral.com, raved about the five-star prodigy.

“He is one of the best athletes in the state,” Obert told Cronkite News via email. “He is a great football player and a solid basketball player; I’ve never seen him play baseball because he doesn’t play for Pinnacle, but I heard he can hit with power, can pitch and runs like a deer in the outfield.”

Obert loves the drive and commitment that Robinson shows as well as his demeanor on and off the field.

“He could be great in both football and baseball. I hear he has some Aaron Judge potential in baseball,” Obert said. “He’s got the world at the palm of his hands, and it is up to him to choose the sport in May after he graduates. He is also a grounded and humble person who doesn’t get caught up in the hype, and he’s a total team player.”

Kevin McCabe, who hosts AZ Preps Live on 98.7 FM on Saturday mornings, is another big fan. McCabe, the “Dean” of Arizona high school sports, has been around Valley high school sports for decades, and he compared Robinson to some of Arizona’s illustrious three-sport athletes.

“Rodney Peete is a great comparison and example to Duce,” McCabe said in an interview with Cronkite News. “He did go back to Kansas for his senior year, but Peete was a phenomenal athlete and a freak in his time. He might have been a better baseball player than football player, which is saying a lot.”

Peete was a star infielder and wide receiver-turned-quarterback at Tucson Sahuaro, winning two state championships in baseball and one in basketball. He played both baseball and football at USC before having a solid NFL career, which could be a very possible track for Robinson.

James Dugan from Flagstaff High was another comparison McCabe made to Robinson. In the early 1960s, Dugan was a three-time All-State basketball player, an amazing running back and defensive back, and a great hitter in baseball. Long considered one of Arizona’s finest athletes, Dugan sounds like a very similar archetype to Robinson.

“Robinson has great hips and feet, can defend and rebound, and has a long, pure swing,” McCabe said about Robinson’s attributes, which translate well in all three sports.

Arizonans have witnessed many high school athletes reach the professional ranks. With a few powerhouse programs sprinkled throughout the state, athletes have been bred here for decades.

Robinson looks like he will be the next star from Arizona. Being a top 30 prospect nationally in football, as well as a great prospect on the diamond, it appears Robinson’s options are wide open as the commitment stage looms. 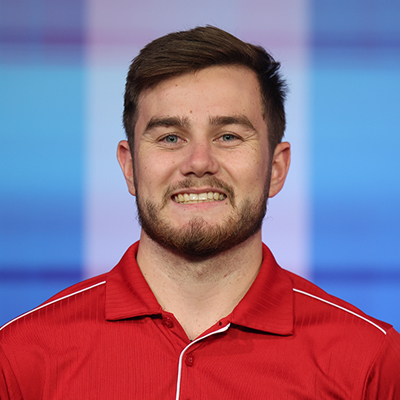 Bobby Murphy expects to graduate in fall 2023 with a bachelor’s degree in sports journalism. Murphy is a contributor for East Village Times and ZonaHoops. 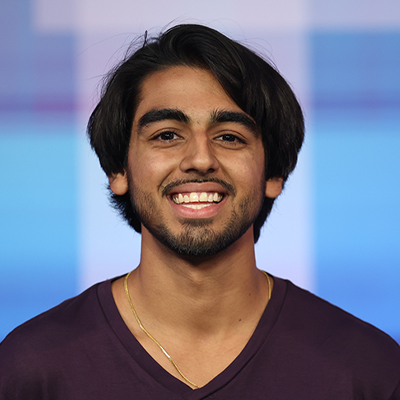 Nikash Nath expects to graduate in May 2023 with a bachelor’s degree in sports journalism. Nath has interned with Arizona Sports and Times Media Group.