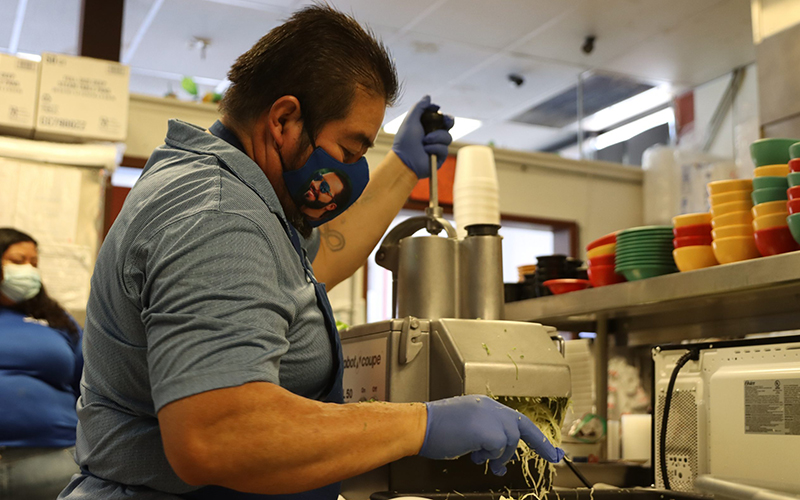 Roberto Jovel prepares lettuce for Salvadoreño Restaurant’s dishes in Phoenix in September 2021. The restaurant is Latino-owned. The economic impact of Latinos has grown dramatically, up from $2.1 trillion in 2015 and $1.7 trillion in 2010, the center’s 2022 LDC Latino GDP Report says. (File photo by Ella Ho Ching/Cronkite News)

LOS ANGELES – Latinos played a crucial role in keeping the U.S. economy humming during the peak of the pandemic, a new report says.

As state and city governments mandated COVID-19 related shutdowns across the country, both Latino and non-Latino workforces saw declines, but as time went on, the Latino force bounced back faster.

As a group, Latinos contributed $2.8 trillion to the U.S. economy in 2020 – more than the gross domestic products of the United Kingdom, India or France, according to a Sept. 29 report from the Center for Economic Research and Forecasting at California Lutheran University.

Despite the turmoil of the pandemic, the California Lutheran University study says Latinos persisted and continued to work.

In 2019, before the pandemic was declared in March 2020, Latino labor force participation was 6.1% higher than non-Latino, the report said.

Latinos were more likely to work in frontline jobs deemed essential during the pandemic. If they became infected with the coronavirus that causes COVID-19, they often returned to work as soon as they were allowed.

“They were in high risk occupations,” Hamilton said. “Did they get sick? Yes. But then as soon as they passed two weeks or whatever and they got their negative test, they were back at work.”

As a result, the Latino contributions to the economy contracted by about 0.8% compared to the 4.4% contraction of the non-Latino GDP, the report states.

“They (Latinos) help the U.S. grow faster,” Hamilton said. Yes, the economy contracted, “but if it weren’t for Latinos, it would have contracted more.

“This is a big deal. A healthy economy needs to grow and the Latino population in the United States is a big, big contributor to overall U.S. economic growth.” 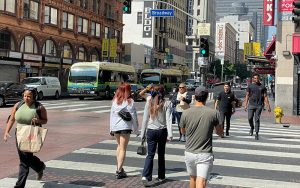 Shoppers, strollers and passersby are active on Broadway in downtown Los Angeles, traditionally one of the city’s most vibrant Latino shopping areas. A new report credits Latinos with helping to keep the U.S. economy afloat during the pandemic. (Photo by Kristen Apolline Castillo/Cronkite News)

Although the California Lutheran study refers to the increase of Latino participation in the economy as Latino GDP, one expert says it’s more difficult to separate out the contribution of Latinos.

Christopher Thornberg, founder of independent research and consulting firm Beacon Economics, said the California Lutheran study’s definition of a “Latino GDP” is the authors’ way of simplifying the concept of the contributions the community had on the economy before, during and after the pandemic.

“I would also argue that they are part of us as a whole,” Thornberg said. “They’re converging very rapidly, and I think to the economy as a whole. So, you know, let’s note how big they’re getting but at the same time, also know how we’re more and more alike as time goes on.”

Thornberg also said the data in the report is consistent with trends he sees as an economist. For instance, education has played a big role, allowing Latinos to move into higher paying careers. The report shows that from 2010 to 2020, the number of Latinos holding a bachelor’s degree or higher rose 96%. For non-Latinos, it increased 34% over the same period.

“The skill-upgrading in the Latino community is faster than other communities because they’re catching up, if you will,” Thornberg said. “That has a lot to do with the growing income of the population. It tends to be a younger population, hence they don’t retire as much, and that means yet again, they are an enormous part of the growth of our economy.”

Consistent with the growth of income, Latinos also are becoming homeowners at a rapid rate, the report says. Latino homeownership rose 7.4% during 2020. The rate has outpaced that of non-Latinos every year since 2010.

“The big takeaway is a U.S. Latino economy is very dynamic,” Hamilton said. “It’s very resilient and it’s an important part of the overall American economy.” 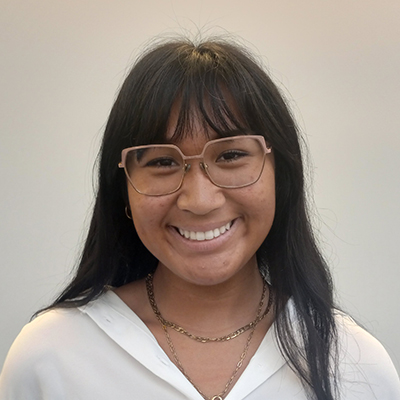