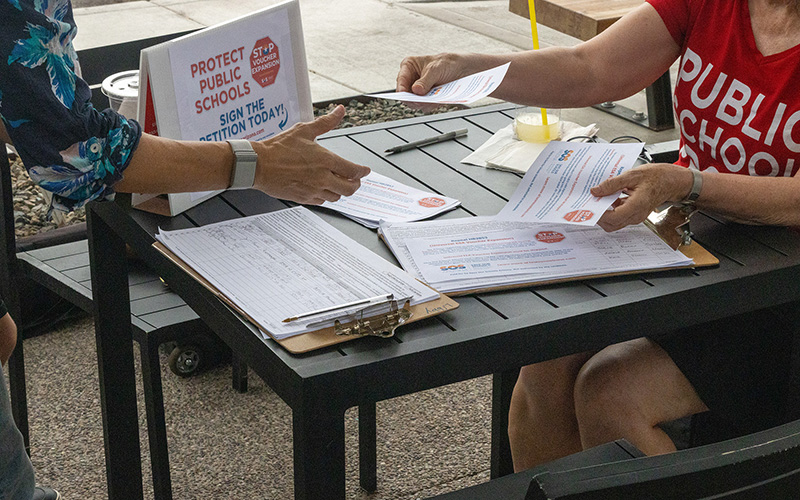 A volunteer collects signatures in Phoenix last week, days before the deadline to file 118,823 signatures to block an expansion of the state’s empowerment scholarship accounts and put the issue on the 2024 ballot. Organizers thought they collected well over that amount by last week’s deadline, but the secretary of state said the group fell shy of the minimum and the law will take effect. (Photo by Justin Spangenthal/Cronkite News)

WASHINGTON – The secretary of state’s office is still counting, but it had seen enough by Friday to say that a petition drive to block expansion of the state’s school voucher program fell short of the required signatures.

The announcement by Secretary of State Katie Hobbs that Save Our Schools Arizona failed to collect the 118,823 signatures needed, means that HB 2853 can take effect. That made Friday a “joyous day” for supporters of the universal Empowerment Scholarship Accounts.

“It took all of us to be able to fight for this and, in 2022, parents really learned what it meant to stand up for our kids,” said Christine Accurso, a Gilbert parent with a child already enrolled in the program. “We will defend this law continually … and we’ll be sure it just gets better and better over time.”

Friday was also supposed to be the deadline for parents to apply to be reimbursed for school expenses in the first quarter of fiscal 2023, but the Arizona Department of Education extended the deadline for another two weeks because of a high volume of families trying to apply.

Opponents accepted the apparent defeat of their petition, but said they are not giving up the fight: They will turn their efforts now to electing “pro-public education” lawmakers, a leader of the opposition said.

“For everybody that I’ve spoken to, folks are just devastated at the impact that this will have on our public schools and on our students,” said Beth Lewis, the executive director of Save Our Schools.

It was a stark change from a week earlier, when Lewis and others held a jubilant news conference outside Hobbs’ office to turn in what they believed were 141,714 signatures, more than enough to put the voucher law on the 2024 ballot – and halt it in the meantime. 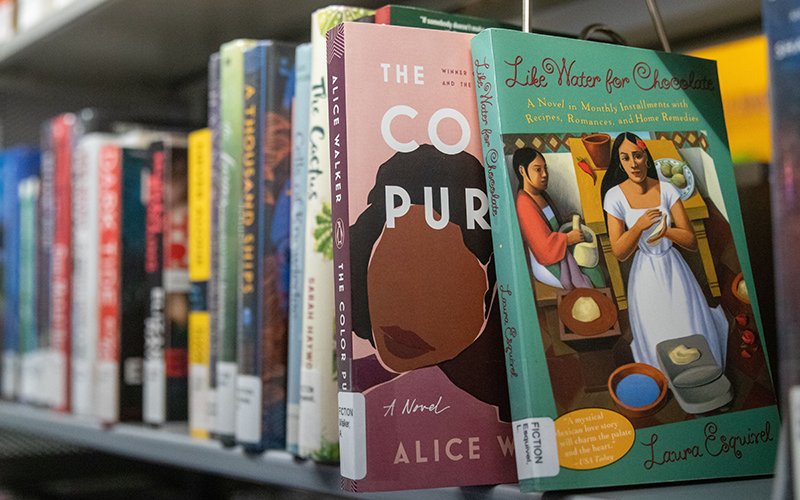 But supporters of the program did their own review and said Monday that Save Our Schools had vastly overestimated their numbers. Based on the number of petition sheets submitted, the Goldwater Institute and the Center for Arizona Policy estimated that there were only 80,000 to 90,000 signatures turned in.

Hobbs said in her letter Thursday to Save Our Schools that the count is ongoing and a final number will be available “in the coming days,” but Lewis acknowledged that the petition drive is over.

“We definitely take the secretary of state’s word fully and accept that decision (and) are figuring out how we want to move forward,” she said.

At issue is HB 2853, a law passed this year that vastly expands the state’s Empowerment Scholarship Accounts. That program gives state funds to families who can then use the money for homeschooling or charter school expenses, for private school tuition or other costs if their child’s needs are not being met at their public school.

The new version of the law makes the funding available to any family in the state. The bill’s sponsor, Rep. Ben Toma, R-Glendale, said families get the funds in exchange for taking their child out of the public school system.

“I hope that other states will follow suit,” Toma said Friday. “This will be a win for not just Arizona kids, but potentially kids in other states as well.”

Students in first- through 12th-grades who are approved for the program will get about $6,500 from the state, while kindergartners will get about $4,000. It is the broadest voucher program in the country, and Toma said he hopes to see Arizona become “the golden standard in terms of school choice.”

Parents who want to tap into the universal ESA account have to apply with the state Education Department. Once the department sends an ESA contract back, the family has 30 days to sign and submit it. 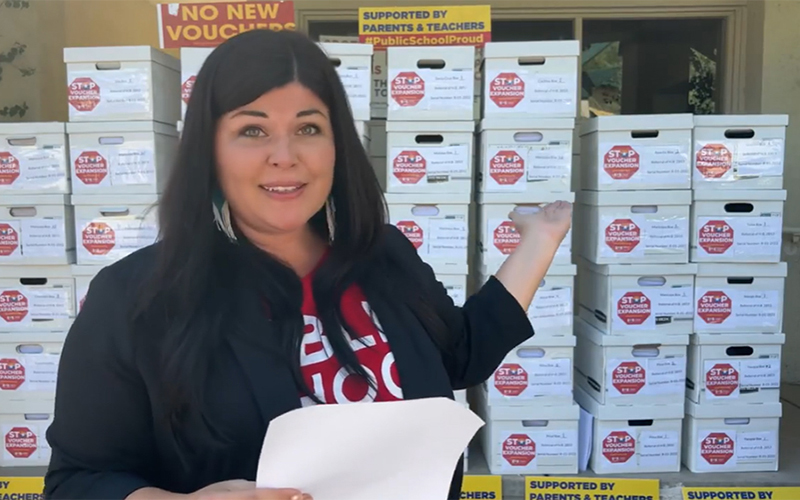 The department said Friday that application review and contract approval “could take a few weeks,” and that it will be working with the Arizona Treasurer’s Office to open ESA accounts for new program participants and disburse the money.

“Today’s victory has been years in the making, it’s taken a long time to get to this point,” said Cathi Herrod, president of the Center for Arizona Policy. “This gives all school children the opportunity where previously it was limited to only certain groups of children.”

But critics argue that the universal ESA program will give state money to many families that do not need it, taking badly needed funds from public schools that are traditionally among the worst-funded in the nation.

“While the results might not be felt tomorrow and public school classrooms, I think very soon, we will see, you know, the inevitable impacts, which include fewer resources for kids and laying off teachers and eventually closing down schools,” Lewis said. “None of that is what the voters want.”

She added that much of the money will go to private schools “that are unaccountable to the public – and we expect that number to balloon exponentially.”

The Education Department would not provide updated application numbers Friday, but said last week that it had already received 10,906 applications for the universal ESA program, and that 76% of those families did not have a child in public school at the time of application.

Lewis said the people she has talked to “are just devastated at the impact that this will have on our public schools and on our students.” While her group is weighing its options, she said it is looking at it now as “an electoral issue.”

“The most important thing, and what we will be laser-focused on … is ensuring that Arizona voters connect the dots and are able to vote for pro-public education candidates up and down the ballot,” Lewis said.

She said her group aims to “assure the people of Arizona that we are, in no way, shape or form ever going to give up on fully funded public schools in every neighborhood for every child.”