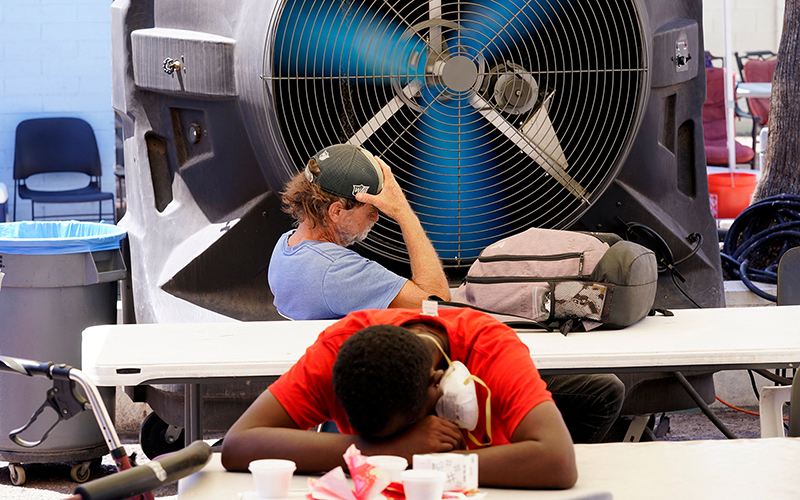 People try to keep cool in July at Phoenix’s Justa Center, which caters to the older homeless population, as temperatures hit 110 degrees. Rising heat and rising heat-related deaths are among the climate challenges the city of Phoenix is grappling with. (Photo by Ross D Franklin/AP/Shutterstock)

WASHINGTON – Phoenix Mayor Kate Gallego touted the city Thursday as a model for enduring extreme weather events, during a virtual panel on how local governments can help defend against the impacts of climate change.

Despite challenges that range from a historic drought to falling water levels, and rising temperatures that are expected to see the number of days above 105 degrees double in the coming decades – Gallego called it “an exciting time for Phoenix.”

“The threats of climate change are pushing us to innovate in ways that will be good for the city in the long term,” she said during a roundtable hosted by Route Fifty, a news outlet focused on state and local government management.

The event highlighted cities already dealing with extreme weather like droughts, heat, flooding and hurricanes. Gallego was supposed to be joined by St. Petersburg Mayor Ken Welch, but he was busy Thursday dealing with the effects of Hurricane Ian, a Category 4 storm that hit Florida this week.

But she said Phoenix is rising to meet those challenges with efforts ranging from planting trees to requiring more energy-efficient buildings. She called Phoenix the “Electric Valley,” due to its investment in electric vehicles and renewable energy. 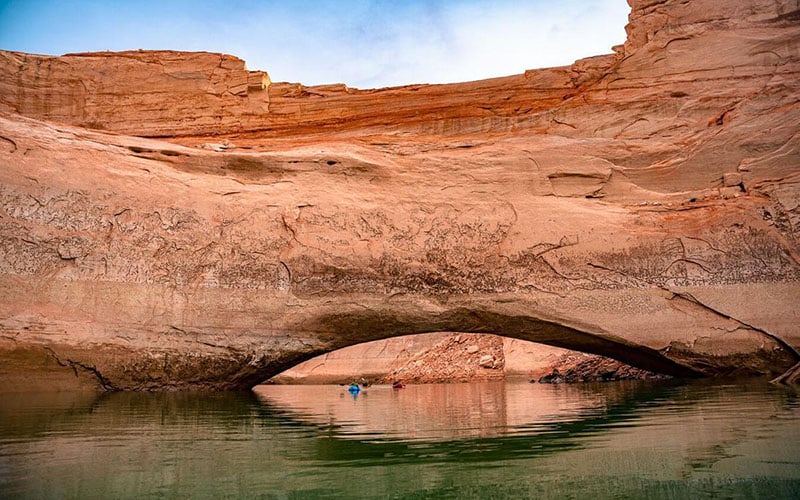 'It's getting close': As megadrought grinds on, Arizona working to meet water demands

Sandy Bahr, director of the Sierra Club’s Grand Canyon Chapter, said in an email that while the city could be doing more to prepare for climate change, the investments it is making now are a big step in the right direction.

“The climate action plan that Phoenix adopted last year is a significant improvement over previous plans and includes a number of programs that can help the city reach its climate goals,” said Bahr, speaking generally because she did not see Gallego’s talk.

Phoenix, and the state at large, face a number of climate threats, including a drought that is still going on after 22 years, rising temperatures and a growing water shortage in the Colorado River and its reservoirs.

Cynthia Campbell, water resources management adviser for Phoenix, said that part of the reason the city can be an example for other local governments is because it has been dealing with droughts for so long.

“Because we are in a desert, we look at drought not as something that’s really extraordinary, but more of a given,” Campbell said.

But the Valley has a lot more to prepare for in the coming years, said Michael C. Morgan, an assistant Commerce secretary at the National Oceanic and Atmospheric Administration. Morgan, who took part in the forum with Gallego, cited a federal climate tool that predicts the city will only get hotter as carbon emissions rise.

Morgan said that heat hits hardest against vulnerable populations – like the elderly, those experiencing homelessness and communities of color – and will continue to do so as the city gets hotter. 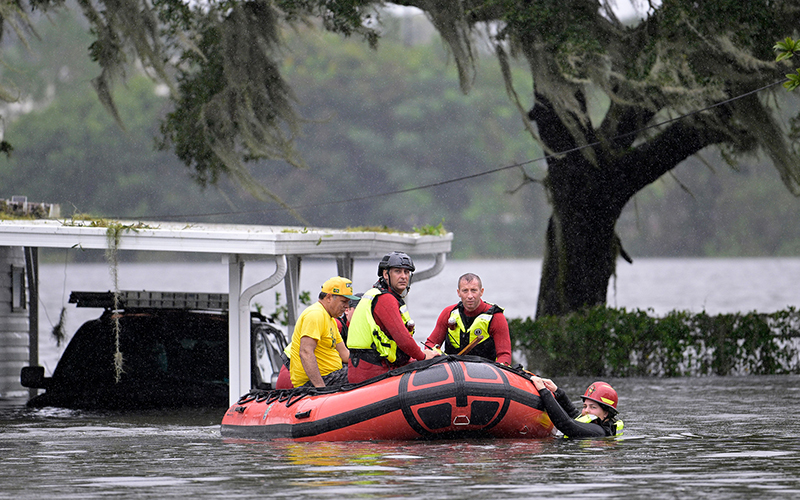 Crews rescue a resident from his flooded home in Orlando this week, after Hurricane Ian slammed Florida. One study taken in the immediate aftermath of the hurricane estimated that climate change may have increased the amount of rain in the storm by 10%. (Photo by Phelan M Ebenhack/AP/Shutterstock)

In Maricopa County, heat-related deaths have risen steadily, from 61 in 2014 to 338 last year, according to county data. As of Sept. 24, the county had confirmed that 255 deaths were heat-related, with another 189 still under investigation.

“I think that is creating more political will than we have ever seen before,” Gallego said.

Bahr said those should include doing more “to demand that the utilities move quickly away from fossil fuels” and demand that utilities deliver clean energy to residents and businesses. She also said the city could reduce emissions by becoming more pedestrian- and bike-friendly.

Campbell said that it may seem to others that Phoenix and the state’s efforts to deal with the drought are nothing special, but that is because the city has operated for the last 70 years as if another drought was on the way.

“I think that is the single most reason why a lot of people look at Arizona and they’re like, ‘Why aren’t they lighting their hair on fire like California is?'” Campbell said.