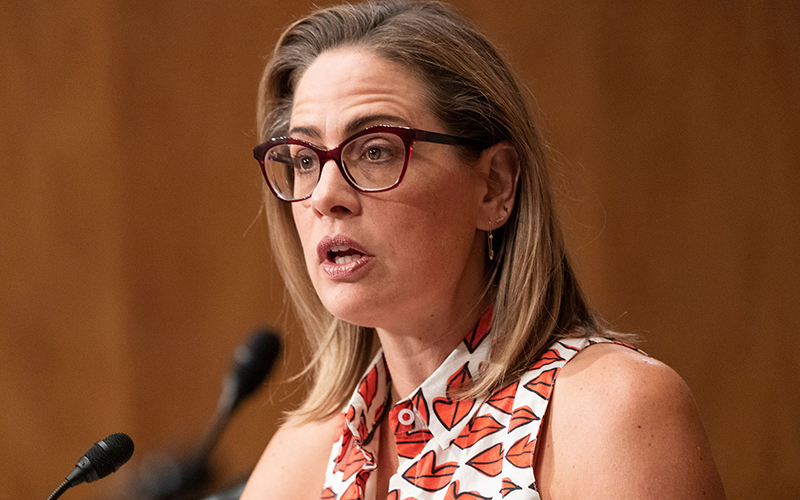 Sen. Kyrsten Sinema, D-Ariz., at a Senate committee hearing earlier this month. Sinema, who has been sharply criticized by fellow Democrats for her refusal to oveturn the filibuster, renewed her defense of it Monday during a speech at the McConnell Center, founded by Senate GOP Leader Mitch McConnell. (Photo by Alex Brandon/AP/Shutterstock)

WASHINGTON – Arizona Democratic Sen. Kyrsten Sinema has been criticized for defending the filibuster before, but that did not stop her from repeating her position Monday, this time at an event hosted by the Senate’s minority leader.

After a warm introduction by Senate Minority Leader Mitch McConnell, Sinema told an audience at the University of Louisville’s McConnell Center that defending the filibuster may be “an unpopular opinion,” but that it’s needed to make the Senate work in a bipartisan manner.

“Arizonans expect political leaders to work together regardless of party politics, make progress, and then move out of the way so that everyday people can build better lives for themselves and their families,” Sinema said.

It’s a familiar refrain for Sinema, one that analysts say is aimed at helping her win over independent voters in the style of former Sen. John McCain, but one that has also alienated many state Democrats in the process.

“She has played a pretty good hand pretty poorly,” said Ezra Levin, co-founder and co-executive director of Indivisible, a national effort to boost progressive Democrats. “Basically, nobody in the state supports Kyrsten Sinema.”

But Kyle Kondik, political analyst at the University of Virginia’s Center for Politics, said Sinema’s across-the-aisle politics are in “keeping with where Sinema has positioned herself in the last couple of years.” 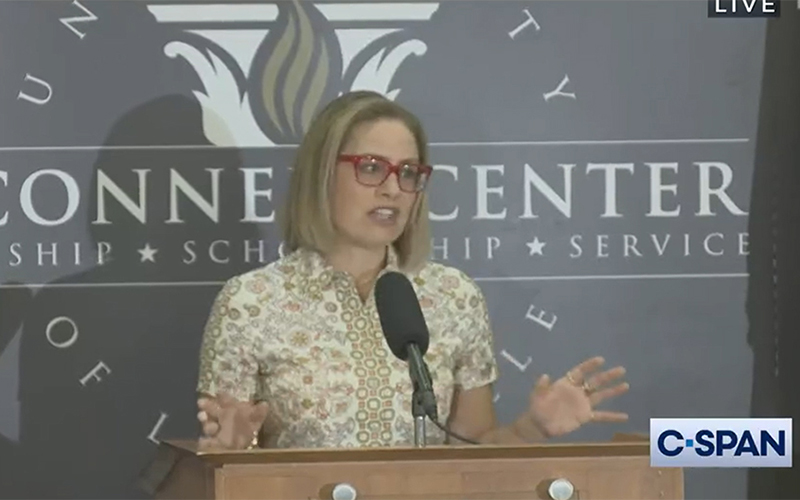 Sen. Kyrsten Sinema, D-Ariz., during her speech Monday at the McConnell Center, where she repeated her insistence that bipartisanship is the only way to win lasting legislation in the Senate. (Photo courtesy C-SPAN)

“Sinema is pretty comfortable being in the middle of the Senate,” said Kondik, who is also managing editor at Sabato’s Crystal Ball. “She is one of the most moderate members of the Senate Democratic caucus and she has continued her outreach to Republicans.”

McConnell introduced Sinema by complimenting her efforts to “protect the institution of the Senate.”

“It took one hell of a lot of guts for Kyrsten Sinema to stand up and say, ‘I’m not gonna break the institution in order to achieve short-term goals,'” McConnell said, adding that the Senate “might well have been broken” without her refusal to vote for eliminating the filibuster.

“Despite our apparent differences, Sen. McConnell and I have forged a friendship – one that is rooted in our commonalities – including our pragmatic approach to legislating, and our respect for the Senate as an institution,” she said.

Under the filibuster rule, it takes 60 votes to end debate and bring an issue up for a vote, allowing the minority to stall legislation even if a majority of senators support it. Democrats, with control of the House and the White House and a one-vote margin in the Senate, had hoped to do away with the filibuster, but Sinema refused, along with Sen. Joe Manchin, D-W.Va.

That position earned her a censure earlier this year from the Arizona Democratic Party, which said the filibuster had been used by the GOP to block voting reform and other Biden administration priorities.

That was echoed Monday by Levin, who said Sinema’s support of the filibuster is “counterproductive” and that while “the goal of forcing everyone to the negotiation table is a good one,” it isn’t working as intended.

“The only bipartisan deal of substance is the infrastructure bill this summer,” Levin said. “In every other instance what we see is Mitch McConnell and the Republicans understanding that they can simply kill legislation without coming to the bargaining table at all.”

But one Arizona political analyst cited the infrastructure bill as proof that Sinema’s bipartisan approach works, which is why she is “doubling down in a very powerful and meaningful way.”

“As it relates to governing and benefits to the state of Arizona, there’s few better examples of that than the benefits that will accrue to the state as a result of the infrastructure bill,” said Jason Rose, the analyst. He credits Sinema bipartisanship with helping win “$4 billion for Arizona’s most acute problem right now, which is water security.” 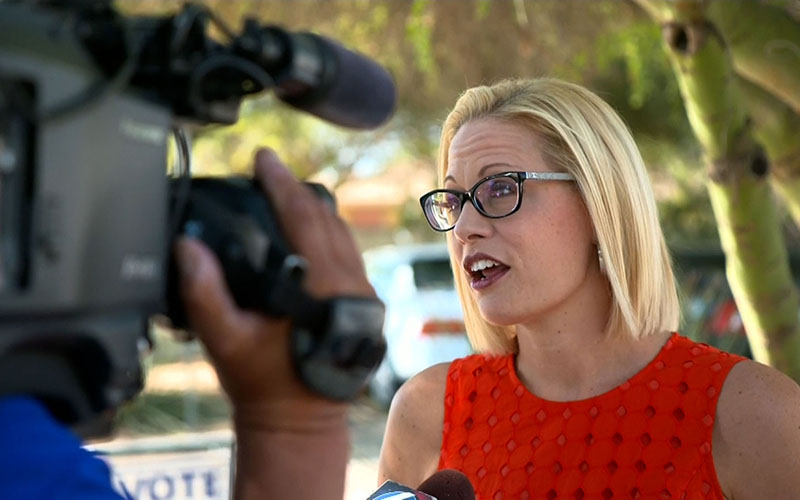 Kondik and Rose agree, however, that Sinema is likely opening herself to a primary challenge.

“If I were her I would be worried about a primary challenge in 2024,” Kondik said, pointing to the regular criticism of Sinema on social media by Rep. Ruben Gallego, D-Phoenix, among others.

In response to tweets on Sinema’s Monday speech in Kentucky, Gallego tweeted that she could be in Arizona working to elect Democrats, but that as he has “been traveling the state and country. Donating, raising funds and encouraging people to come out and vote and I have seen you nowhere.”

“Politically, it continues to open her up to a primary challenge,” Rose said. “Many in her party don’t like bipartisanship. They think progressivism and Democrats have a monopoly on truth and therefore everything should be looked at through a purity test.”

Sinema continued to push boundaries Monday in a nearly hourlong speech, saying she wants to work with Sen. John Cornyn, R-Texas, on an immigration bill that would bring in “good people who want to be a part of this country” while also ensuring that “we actually have security at our border.”

Rose said he expects “jabs, haymakers, right hooks, left hooks, every punch imaginable thrown in a pretty divisive primary fight.” But if she can survive a primary, Sinema’s bipartisan stances won’t “hurt her in a general election for sure.”

Both he and Kondik pointed to McCain, who often worked across the aisle while he was in the Senate. Kondik said McCain “in some ways, is a guide for Sinema.”

“McCain, particularly in his later years, often had criticism from his right,” Kondik said. “It didn’t stop him from winning reelection.”