Federal officials announced Thursday that Flagstaff would be getting almost $32.5 million for the Downtown Mile project, which will add pedestrian underpasses and gates for railroad tracks the run through town, along with other projects. (File photo by Conrad Romero/Cronkite News)

WASHINGTON – Federal officials announced the release Thursday of $32.5 million for pedestrian improvements along Flagstaff’s Downtown Mile, the largest portion of what one official said will be biggest transit investment in the city in years.

The Flagstaff project was one of 26 announced Thursday by the U.S. Department of Transportation, part of a $1.5 billion released in the latest round of funding under the Bipartisan Infrastructure Act.

The federal money will be matched by $15 million from Flagstaff and another $11 million from Burlington Northern Santa Fe Railway for the $58 million project.

The Downtown Mile Safety and Connectivity Improvement Project is expected to enhance safety and travel along a mile-long stretch of road and rail that spans the downtown area. It includes pedestrian underpasses at Rio de Flag, Milton Road and Florence-Walnut, as well as a pedestrian gates at the at-grade rail crossings at San Francisco Street and Beaver Street. 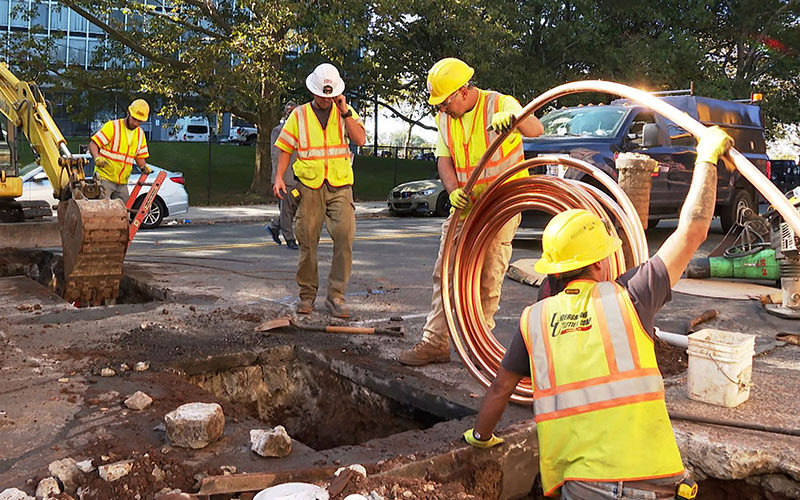 The Milton Road underpass will allow for future widening of the road from four to six lanes, according to the Transportation Department. Rep. Tom O’Halleran, D-Sedona, said the project also calls for realignment of BNSF rail lines through town.

“The Downtown Mile is an initiative that will improve public safety and transportation in such a beautiful, rapidly growing city in our district, addressing flood control issues and climate change mitigation in the process,” O’Halleran said in a press release on the funding.

Cameron said the project will do more than improve pedestrian safety. The first undertaking, for example, the Rio de Flag pedestrian underpass, is part of a much larger project that the city and the Army Corps of Engineers have been working on for roughly 20 years, to reduce flooding in the area by redirecting the Rio de Flag channel through downtown.

The Rio de Flag underpass will also give bikers and pedestrians a direct path between north and south downtown, she said.

Cameron said the Milton Bridge phase of the project will also allow for improvements to the bridge, which “has a very low clearance.”

By allowing for future widening of Milton Avenue, the “Downtown Mile Project will improve traffic efficiency on Milton Avenue, the busiest road in Flagstaff,” Coconino County Board of Supervisors Chair Patrice Horstman said in the statement from O’Halleran’s office.

An underpass in the historic La Plaza Vieja neighborhood will keep bikers and pedestrians from having to cross an active rail line, Cameron said, while the BNSF realignment will improve efficiency and capacity for the railway. The BNSF’s southern transcontinental line from Los Angeles to Chicago currently brings 80 trains a day through downtown Flagstaff on two lines, that could be expanded to three under the project.

“This project represents good governance at its best – public and private partners coming together to ensure positive, commonsense change is made for Flagstaff,” O’Halleran’s statement said. “I’m looking forward to continued work with local, state, and federal partners in fast-tracking this critical project.”

The grant is part of the $1.2 trillion Bipartisan Infrastructure Act passed last fall to rebuild America’s “crumbling” infrastructure, everything from roads to waterlines to broadband.

“Today we are announcing transformative investments in our nation’s roads, bridges, ports and rail to improve the way Americans get around,” Transportation Secretary Pete Buttigieg said in a statement announcing the funding.

The Downtown Mile project was the only Arizona project to win funding in this round. Cameron said she expects it will take about another year of design, and she hopes to see construction underway by 2024.

“We can’t wait to get started and get these improvements done for the city and the community,” she said.