Flip burgers for $22 an hour? California may adopt a labor-management council to set wages 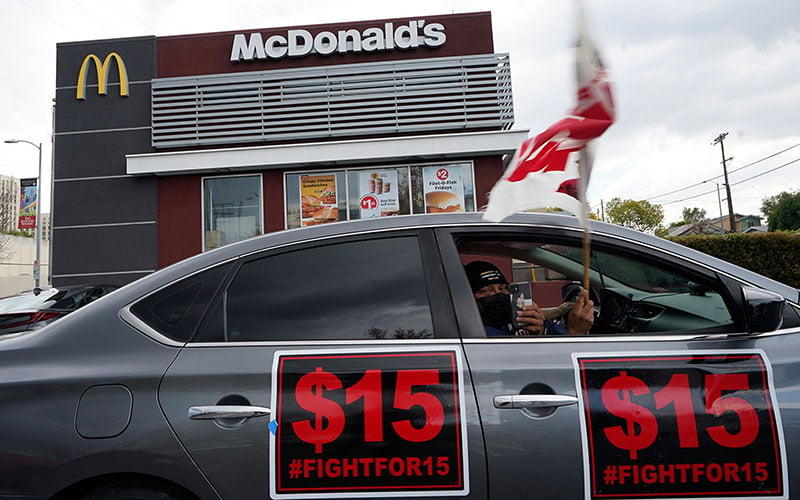 If a bill for California fast-food workers is signed by Gov. Gavin Newsom, a new council of industry and labor representatives could set wages and working conditions for fast-food workers. In this March file photo, fast-food workers drive-through to protest for an increased minimum wage outside a McDonald’s restaurant in East Los Angeles. (Photo by Damian Dovarganes/AP/Shutterstock)

LOS ANGELES – Sandro Flores’ life changed when his mother got sick. He went from studying microbiology to working at a Carl’s Jr., putting in long hours and double shifts.

Flores has become an advocate for a California measure to create a fast-food council – composed of equal numbers of industry and labor representatives – to set minimum wages and improve and standardize working conditions.

Approved last month by the legislature, the Fast Food Accountability and Standards Recovery Act now waits on Gov. Gavin Newsom. If he signs the bill, it could mean big changes for an industry that employs many students and immigrants. It also could become a model for wage activists in other states, including Arizona, where the minimum wage is $12.80 an hour.

“It would help us all to be included and have a voice. It would give us a seat at the table,” said Flores, who earlier this week joined other fast-food workers outside a McDonald’s near downtown Los Angeles to celebrate the bill’s passage.

The U.S. Chamber of Commerce and California Restaurant Association lobbied hard against the bill, saying it would increase costs for franchise owners and consumers.

The restaurant association was one from a long list of opponents that joined together as part of the Stop AB 257 Coalition. The bill, if approved, “will impact an enormous and diverse range of local restaurants,” it says on its website.

Advocates say the measure will disproportionately benefit all low-wage fast-food workers. According to Fight for $15, a group pushing for a $15-an-hour minimum wage, California’s fast-food workforce is nearly 80% people of color, more than 60% Latino, and two-thirds women.

The council would be allowed to raise the minimum hourly wage to as high as $22 by the end of 2023. The 10-member council would be composed of four seats held by industry representatives, four held by labor and two by state officials.

A recent study conducted by researchers at Harvard University and the University of California, San Francisco found that the state’s fast-food workers are paid $3-an-hour less than comparable service-sector workers and face relatively higher levels of schedule instability. As a result, they are more than twice as likely to live in poverty than other workers and more likely to rely on public assistance.

But the bill isn’t just about better wages, workers say.

“No one knows what really happens inside these restaurants for every little thing they want to punish you and give you a warning,” said Maria Rosa Banuelos, a McDonald’s worker, after a news conference to mark the passage of the bill.

Advocates say undocumented workers are especially afraid to speak out.

Flores and Banuelos both said managers don’t allow water breaks for their employees, and they complain about too-frequent restroom breaks.

It’s yet to be seen how the California bill plays out in organized labor’s nationwide fight to increase the minimum wage. Although Arizona’s minimum hourly wage is $12.80, it can differ by city, according to the Industrial Commission of Arizona. Tucson plans to raise its minimum hourly wage to $15 in 2025, and Flagstaff is at $15.50.

Workers say they deserve a raise.

“How is it that as essential workers, we are still the ones that earn the least money out of all the industries?” Flores asked.