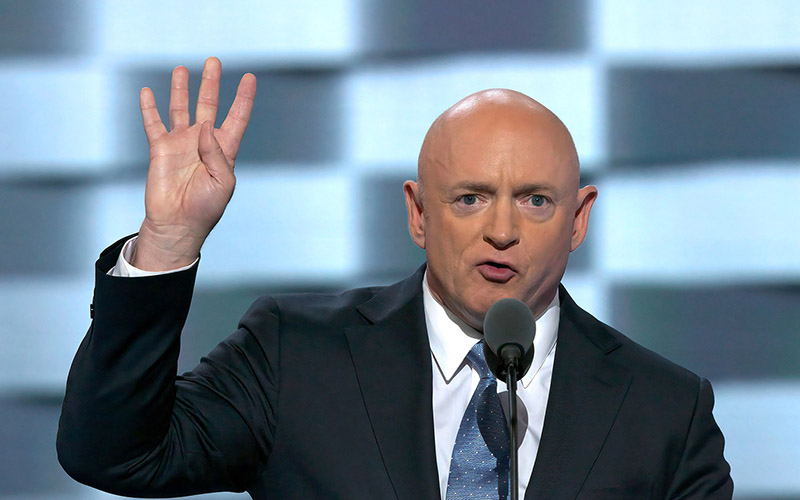 Like many Democrats up for election this year in Arizona, Sen. Mark Kelly has not embraced President Joe Biden on the campaign trail for support in the midterm election. Kelly is shown here in a file photo from the 2016 Democratic National Convention. (Photo by Mark Reinstein/Shutterstock)

WASHINGTON – President Joe Biden’s name is being invoked a lot this year on the Arizona campaign trail – by Republicans.

Meanwhile, the president is all but invisible on Democratic campaign websites. The latest example came Sunday on CNN’s “State of the Union,” when Democratic Sen. Mark Kelly would not directly say if he wanted Biden’s help on the campaign trail.

“If anybody wants to come to Arizona and talk about Arizona issues or issues that affect the country, I’ll be here,” Kelly said when asked by host Jake Tapper if he would like to have Biden go to Arizona.

But Kelly followed that up by telling Tapper he is “not at all” concerned that Biden will drag down Democrats’ 2024 chances in Arizona.

A spokesperson for Kelly’s campaign declined comment this week on the exchange. But political analysts said they were not surprised to see Kelly “playing jiu-jitsu” with Biden’s support, noting the president’s low approval ratings and the challenges traditionally faced by the party holding the White House in midterm elections.

To Kyle Kondik, managing editor at Sabato’s Crystal Ball and political analyst at the University of Virginia’s Center for Politics, Democrats omitting Biden from their messaging is a “pretty normal strategy during a midterm, specifically when a president is unpopular.”

The most recent polls show just 41% of voters approved of Biden’s performance. While that has risen from a low of about 36% over the summer, it is still low enough for Republicans to focus on Biden and try to tie Democrats to his administration.

“It’s natural for Republicans to emphasize Biden and Kelly together,” Kondik said. “When you’ve got an unpopular president, the opposite party will use that to their advantage.”

Masters is not the only Republican highlighting the Biden administration on his campaign site. Even though she is not running for federal office, GOP gubernatorial nominee Kari Lake’s issues page manages to cite Biden and his administration nine times in her discussion of border issues.

Democrats like Stanton, Schweikert challenger Jevin Hodge and Rep. Ruben Gallego, D-Phoenix, meanwhile, do not mention the president once in their campaign literature. Rep. Raul Grijalva, D-Tucson, does mention Biden once – but only to tout the president’s signing of veterans’ legislation.

In 2018, the tables were turned. With Trump’s approval rating at about 38% that November, Republicans lost control of the House to Democrats.

“It was pretty common for Democrats to use Trump against Republicans in 2018,” Kondik said.

Despite having a less-than-popular president at the head of the party, however, one analyst said Kelly’s position is “remarkably strong.” A Fox News poll last week gave Kelly a 50-42 edge over Masters in the Senate race.

“We would expect Biden’s approval rating to track pretty closely with where Democratic Senate candidates and incumbents are,” said Jessica Taylor, Senate and governors editor for the Cook Political Report. “So far we have not seen that in races like Arizona with Mark Kelly.”

Jason Rose, a Republican political consultant, agrees that Kelly is in a good position. But he also agrees with Kondik that putting distance between himself and Biden is necessary, especially due to the fact that Kelly has voted with the president an “overwhelming amount of the time.” Kelly has voted with the president 94% of the time, according to a FiveThirtyEight analysis.

Analysts said Kelly is likely trying to appeal to swing voters in Arizona.

“He already has the support of people who approve of the president and he doesn’t want to alienate, further, swing voters who don’t have a great opinion of the president,” Rose said. “It’s as simple as that.”