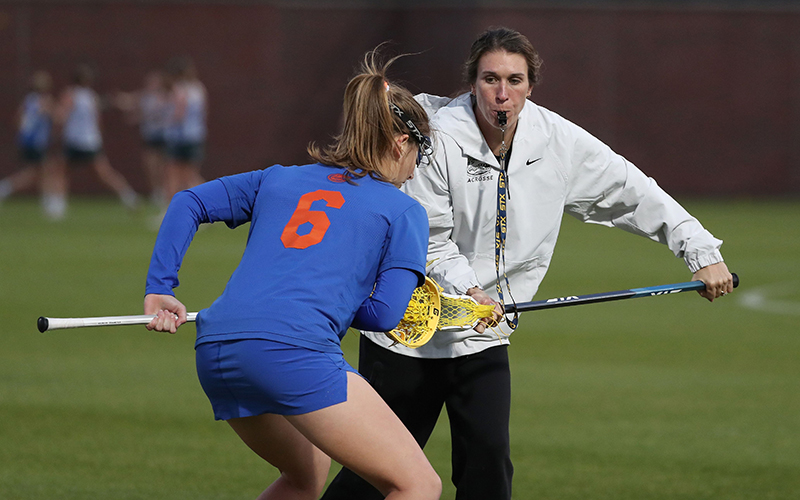 New Arizona State lacrosse coach Taryn VanThof is determined to help build the sport at all levels and increase exposure. The Sun Devils are coming off their best season in the program’s five years, reaching the Pac-12 championship game for the first time. (Photo courtesy of UF Athletics)

TEMPE – When Taryn VanThof was introduced as the new lacrosse coach at Arizona State on July 6, she pledged to build the sport – which traditionally is played on the East Coast – and the Sun Devils’ brand throughout the state, region and country.

The native of upstate New York was a standout midfielder at Loyola University in Maryland. Both states are hotbeds for lacrosse, and VanThof aims to push ASU to reach the same level of prominence.

“We’re going to expand,” she said. “We’re going to expand the community. I think that’s the biggest thing as we look at ASU and ASU lacrosse and Sun Devils lacrosse. We want it to be not just here on the West Coast. It’s going to be a national brand extending over and throughout.”

The Sun Devils are coming off their best season in the program’s five-year history. They posted an 11-8 overall record and 7-3 mark in conference play, and reached the Pac-12 championship game for the first time.

ASU is the only one of the four Division I colleges in the state that has a lacrosse program. Last year’s roster did not feature a single player from Arizona, and only one player has represented the state in the program’s first five years. In addition to her coaching responsibilities, VanThof also aims to expand youth lacrosse in the Grand Canyon State.

“It’s going to start on campus for us with camps and clinics and being able to show our face to promote us but (also) to bring people to us,” VanThof said. “It’s going to create a community. It’s going to build an empire, and I think it’s exciting.”

Meanwhile, at the high school level, lacrosse is not a sport that’s sanctioned by the Arizona Interscholastic Association, which oversees high school sports in the state. The AIA categorizes lacrosse as a club sport, and therefore doesn’t sponsor a state championship in the sport. 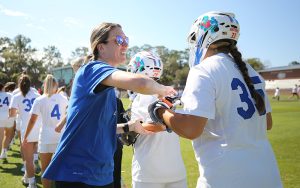 Taryn VanThof, left, is well aware that last year’s ASU roster had no players from Arizona, and that only one player has represented the state in the program’s first five years. (Photo courtesy of University of Florida Athletics)

A few years ago, the AIA began the process of adding lacrosse as an official high school sport, but the momentum stalled.

“Right now, we just have to continue as is, and that is we recognize that it’s a club sport being played and that it doesn’t have any affiliation with the AIA,” said Seth Polansky, the association’s director of sports information.

The AIA requires numerous steps for a sport to become sanctioned, Polansky said. First, a group must present a proposal to the AIA executive board expressing interest in adding it. The executive board will then watch a season to see how the sport operates and meet with the proposers about logistics. The AIA then polls superintendents and athletic directors across the state to gauge interest.

Should the sport receive enough interest from these parties, the AIA will review another season to get a better idea of how the sport would run under the direction of the AIA. The schools then would need to get lacrosse approved in their budgets, and the AIA would need to determine during which season it would be played.

“It will come down to not just availability of when it can be played,” Polansky said, “but also who are the athletes? Who are the lacrosse players? What other sports are they also playing? We don’t want to have a whole bunch of baseball players or a whole bunch of softball players also play lacrosse. That’s going to cut into their time in the spring.”

According to Maxpreps, 24 Arizona schools have girls lacrosse teams and 55 have boys teams.

Because these teams are clubs, anyone can join – even if they don’t go to that school. However, if lacrosse becomes an AIA-sanctioned sport, players would have to attend the school to play on its team. Student athletes at schools that don’t offer lacrosse won’t have the option to play it for another school.

The AIA currently sponsors 14 sports in the fall, winter and spring seasons. Across the country, lacrosse generally is played in spring. The AIA has seven sports in the spring and just three in the winter.

“We can’t foresee it at this point whether it will or won’t become an AIA sport,” Polansky said. “We’re always for increasing opportunities for student athletes. If lacrosse ends up being one of them, then we’re going to embrace it.”