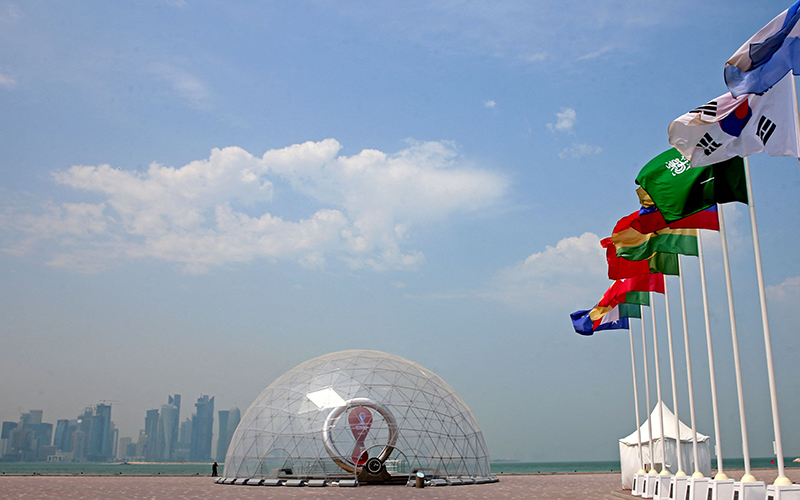 A countdown clock in Doha builds excitement for the FIFA World Cup in Qatar, where the world’s high profile soccer competition will begin on Nov. 21. Visitors from other countries are encouraged to pay attention to laws and customs in the host nation. (Photo by Mustafa Abumunes/ AFP via Getty Images)

PHOENIX – As Qatar prepares to host the 2022 World Cup in November, the U.S. government is reminding fans traveling abroad to pay attention to laws and customs in the Arab nation.

Women and the LGBTQ+ community are particularly vulnerable.

“Same-sex sexual relations between men are illegal, even if consensual,” the U.S. Department of State warns on its website. “Penalties include lashing, lengthy prison sentences and/or deportation.”

It also advises that “in deference to Islamic culture, (women should) avoid wearing sleeveless shirts, halter-tops, or shorts” and that “public intoxication, can result in severe penalties such as arrest, heavy fines, imprisonment, and/or deportation.”

Beginning Nov. 22, 32 teams represent countries from around the world will compete for soccer’s coveted trophy across 27 days. The evet could be the last World Cup for some of the game’s biggest names, including Lionel Messi and Cristiano Ronaldo.

Qatar which was awarded the opportunity to host the 2022 World Cup in 2010, is the smallest nation by area to have been awarded a FIFA World Cup. The next smallest is Switzerland, host of the 1954 FIFA World Cup, which is three times larger than Qatar.

The size of the country is small but controversy surrounding it is large.

“There are publicly reported stuff online on Westerners that are jailed for things like public intoxication, even just drinking, because it’s only legal in certain parts (of Qatar). … And also, Westerners that get jailed for having sex or kissing and things like that,” said Ken Klippenstein, an investigative reporter for The Intercept.

The event is expected to draw a large number of fans to the country and to their televisions.

“The World Cup is the most popular sporting event on the planet,” Washington Post soccer reporter Steven Goff said. “Only the Summer Olympics comes close. Per TV viewership, the tournament also does very well among American sports fans, especially when the U.S. team is involved.

“In many countries, the national team’s appearance in a World Cup match rivets the public and elevates national pride like nothing else.”

FIFA, the sport’s government body, said data it compiled from an audit found that 3.572 billion viewers – more than half of the global population 4 and over – tuned in to broadcast coverage of the 2018 competition.

“Qatar has laws and customs that many fans might not be familiar with,” Goff said. “As with travel to any country, visitors are advised to learn about the differences and respect the rules. It’s certainly going to be a different type of World Cup for the players: the time of the year (winter instead of summer) and one host city (instead of 10 or more)

“And it’s going to be different for fans, (including) not enough hotels and housing, which has led to accommodations on ships and in desert camps, and the scarcity of alcohol and beer gardens in a conservative society.”

Although the World Cup is typically played in June and July, the 2022 event was moved to November and December to avoid Qatar’s intense summer heat.

Qatar has found itself the subject of much debate. Recently, Norwegian reporters Halvor Ekeland and Lokman Ghorbani, who were in the country to report on preparations for the World Cup, were arrested for trespassing on private property and filming without permit, something they said they were granted.

General Abdulaziz Abdullah Al Ansari, head of security for the 2022 World Cup, told the Associated Press his officers been trained ‘to be more forgiving. They are given more authority to act with tolerance and allow people to express and celebrate in the streets, as long as they don’t get engage in violence.”