Beavers create messy wetlands as safe places to live, spreading out a stream into a network of channels, waterfalls and pools. A study published in April shows the positive side effects of that work, arguing that beavers could be a useful tool in reducing harm from flood, drought and wildfire – all made more frequent by climate change. (Photo by Alex Hager/KUNC)

BOULDER, Colorado – In the foothills of Boulder County lies a kind of secret water park, a sprawling network of pools, channels and waterfalls. Neck-deep ponds, rushing streams and cascades twice the height of a person are a stark contrast to the dry, brushy terrain on the canyon slopes above. But these features weren’t built by humans.

This marshy mosaic is a paradise for beavers, and one of hundreds of thousands like it across the American West. The animals create messy wetlands as safe places to live, and a recent paper explains how their handiwork also is a powerful tool in fending off the harms of climate change.

Emily Fairfax, one of the paper’s authors, is an ecohydrologist at California State University Channel Islands. She is one of the nation’s most prominent beaver experts, and has been studying the Boulder County site for years.

“The beavers here are very industrious,” Faifax said on a cool spring afternoon, knee-deep in one of their ponds. “They’ve built a lot of dams per square area. You just get these totally ridiculous water slides everywhere and waterfalls. You can’t even tell where one dam starts and the other one stops, because they’re all going at weird, wonky angles against each other. It’s totally bizarre.”

Any human looking to properly explore the beaver complex might want to follow Fairfax’s dress code: chest-high waders and a pair of sturdy boots. While some parts are just a gentle trickle, easy to walk across without so much as a soggy ankle, other portions are wider and deeper than a backyard swimming pool.

As Fairfax wades through the watery wonderland, she points out various attractions along the way. One, a “hot tub,” provides a calm respite beside a rushing waterfall. Another, the “hot dog factory,” is where beavers leave behind sausage-shaped chunks of wood while they whittle logs down to the right size for dam building. This was once a fairly narrow, straight stream conveying snowmelt down from the mountains, but it has been completely reshaped by beavers.

This complicated network of watery pathways is a way for beavers to keep safe. North America’s largest rodents are clumsy walkers but talented swimmers. By building a snaking network of channels in the wetlands, beavers create easily accessible escape routes should they ever need to quickly flee a predator.

Beyond the benefits to beavers themselves, their work has a long list of positive side effects that help local ecosystems thrive. This complex is lush with plant life, and at least one fresh-looking scat deposit. Fairax calls the droppings a “huge pile of evidence” that the wetland is a hospitable stop for deer and elk.

“There’s so much different habitat here,” she said. “If you like eating little herby things, we’ve got it on-site. If you like eating other animals, we’ve definitely got that on-site. If you need to hide under the sticks, there’s plenty of them. If you like to swim like a frog, there’s tons of water pathways you can take. So pretty much all these different organisms, when they come to the beaver ponds, they’re getting ideal habitat for themselves, too.” 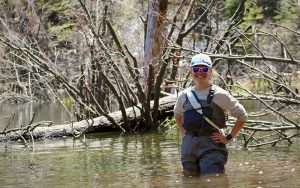 Emily Fairfax of California State University is one of the nation’s leading beaver researchers. On a tour of a beaver habitat in Boulder County, Colorado, she waded through the many features of a sprawling wetland. “You can’t even tell where one dam starts and the other one stops,” she says. (Photo by Alex Hager/KUNC)

Her latest publication suggests that ecosystems, broadly, could stand to benefit from beaver wetlands in ways that are uniquely resistant and resilient in the face of climate change. Scientists have already touted the benefits of process-based restoration, a low-tech means of rebuilding floodplains over time. The new paper contends that beavers are “a force of 15 to 40 million highly skilled environmental engineers” whose digitated paws and sharp incisors are ready to help implement that restoration.

The April study – “Beaver: The North American Freshwater Climate Action Plan” – is largely a summary of existing research, pulling together and contextualizing established science about rivers and beavers. It makes the case that beavers once were pivotal in shaping and maintaining healthy riverscapes before their populations were crippled by years of trapping.

Chris Jordan, an Oregon ecologist with the Northwest Fisheries Science Center and the study’s other co-author, said the research stands in the face of “dire warnings” and the “doom” of harm beyond our control.

That protection and resilience comes in a few forms. The first is a safeguard against flooding. Rising temperatures are increasing the frequency of heavy rain and rapidly melting snow. In the channel of a narrow stream or river, that surge of water is likely to quickly overtop the banks and flood. Beaver wetlands, with their wide swaths of soggy land, would help spread some of that water out and limit flooding downstream.

Just as beaver complexes are helpful in the face of too much water, they have proven useful in areas with not enough. High-mountain snow serves as a kind of natural reservoir for the region, slowly releasing water throughout the spring and early summer, assuring a steady supply to the places where humans divert and collect it. But as the West continues to rapidly warm and dry, snowpack is getting smaller and melting earlier. Beavers, meanwhile, are essentially building miniature reservoirs in mountainous areas throughout the region.

Drought also means an increased risk of wildfires, and beavers have proven their mettle against the flames. Even in areas completely ravaged by wildfire, where tree trunks are reduced to blackened toothpicks and soil is left gray and ashen, beaver complexes survive unscathed. The wet earth and thriving greenery resist burning, leaving oases of green in the middle of the lifeless moonscapes left by wildfire.

Spreading water out across valley floors also has proven benefits for water temperature, water quality and even carbon sequestration. Moving water laden with sediment, nitrates or carbon slows in beaver ponds, allowing particles to settle or get consumed by microbes, unlike in a fast-moving stream.

Jordan said allowing or helping beavers to expand their work would help more areas, at least locally, steel themselves against more extreme weather conditions brought on by climate change. But he knows the industrious animals won’t turn things around entirely.

“We have to have a diverse portfolio of potential responses,” he said. “Some of them are mitigating the impacts – that is trying to solve the damage that’s already been done, and others are adapting – trying to solve or fix the damage rather than return and return conditions to the way they were before. Beaver-modified floodplains are playing both roles.”

The study suggests humans could help boost the work of beavers through policy changes. In many jurisdictions, beavers are considered pests that can be killed if they’re agents of crop damage or caught plugging culverts, flooding roads or property.

“We should start rewriting our beaver management policies today to actively support coexistence over lethal management so that if and when beavers arrive in a riverscape they can thrive,” Jordan and Fairfax wrote. “We should proactively educate wildlife managers, land managers, and the public about the incredible value that these ecosystem engineers bring to our communities.” 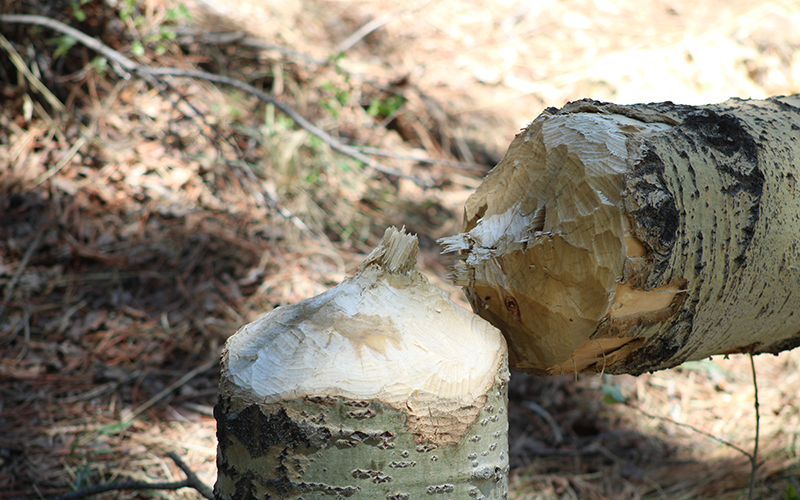 A freshly gnawed stump yields a log that will soon become part of a beaver dam or lodge. New research contends that beavers are “a force of 15 million to 40 million highly skilled environmental engineers” who can help transform riparian areas across the country. (Photo by Alex Hager/KUNC)

The growth of beaver populations would, in some ways, be a return to the way things were before human activity reshaped the West’s waterways. Ellen Wohl, a fluvial geomorphologist at Colorado State University, studies the flow and formation of rivers.

“If you read some of the earliest written descriptions,” she said, “whether they’re going upstream or downstream, the French, the English, the Dutch, the Spanish – they’re all complaining about how hard it is to figure out where the river goes.”

In big rivers, those often were logjams. In small and medium-size rivers, beavers created messy wetlands that were hard to follow. As more people moved into the West, they found that neater, straighter rivers served them better – for boat travel, flood control and rapid disposal of waste.

In March, Wohl and her colleagues issued a study on the decline of beaver habitat, estimating that North American beaver populations now are 80% to 98% smaller than they were before European settlement. Populations were likely in the hundreds of millions at their peak, and now number 9 million to 12 million.

Wohl agrees that boosting beaver populations would provide ecosystems boosts that resist climate change, but she noted the challenges involved in implementing policies that would allow beavers to thrive.

Although some beavers live in urban areas, they aren’t abundant, making investment in their success unlikely. And the ranching community, Wohl said, is divided. Some are “big fans” because beaver dams hold back water and create steadier flows longer into the season, but others are adamantly opposed. Because of that, certain pieces of private agricultural land could be a good place to start with plans to boost beaver populations.

She also cited public lands for the same purpose, specifically National Park Service and U.S. Forest Service land.
This story is part of ongoing coverage of water in the West, produced by KUNC in Colorado and supported by the Walton Family Foundation. KUNC is solely responsible for its editorial coverage.