EUGENE, Ore. – Even though exhaustion had set in, former Northern Arizona teammates Abdihamid Nur and Luis Grijalva prioritized a tight embrace after the men’s 5,000-meter final Sunday at the World Athletics Championships.

Immediately after, Grijalva fell to his back on the Hayward Field track. The Guatemalan ran a season-best 13:10.44 to finish fourth – the best finish for Guatemala in any event in the history of the World Championships.

“I don’t know, it’s just crazy,” Grijalva said after walking off the track Sunday. “I don’t know, my mind is going a million miles an hour.”

Nur, representing the United States, finished 11th in 13:18.05– the culmination of a season that included helping NAU win its fifth NCAA Cross Country National Championship, to go along with a pair of individual titles at the NCAA Indoor Championships in the 3,000 and 5,000-meter.

While Grijalva and Nur made it look easy Sunday, reaching this point was a lesson in perseverance for both.

Formerly a soccer-player, Nur didn’t begin running until his junior year at Phoenix’s North High School. During his sophomore year, Nur was in a near-fatal car crash, causing him to miss the entirety of the soccer season and three months of school.

Running junior varsity, Nur took third place in his first cross country race, which drew the attention of his high school coach, who told him he should forgo soccer and focus on running.

“On the way here traveling to Worlds he took me back to that moment and was like, ‘Remember when we told you to run?’ And I’m incredibly grateful for him telling me (that) just because he changed my life in so many ways,” Nur said.

Nur ran track that spring as a junior at North before winning the AIA Division I Cross Country State Championship as an individual in the fall, clocking 15:49.0 in the 5,000 meters.

However, out of high school, Nur attended Coconino Community College because he was academically-ineligible to attend NAU. Coconino did not have a cross country team at the time, so Nur had to train alone and occasionally with friends if he was lucky.

In the spring of 2018, Nur was still academically ineligible to attend NAU and it wasn’t until the summer of 2019 that he was able to launch his Lumberjacks career and meet Grijalva, who was on campus that summer before his junior year. Grijalva then became a mentor and training partner.

“NAU produces athletes and great people,” Nur said. “So me and him came in, as you know, almost like lost kids and we were able to get guided by coach (Michael) Smith and be able to come compete at the highest level.”

For Grijlava, his time Sunday was just shy of the personal-best he set at the Tokyo Olympics last year when he finished 12th overall and ran 13:10.09, but getting to Tokyo was anything but straightforward for the Guatemalan.

Grijalva was born in Guatemala City and moved to Fairfield, California, with his parents and two older brothers when he was 1. Formerly an undocumented immigrant, Grijalva is now protected under the Deferred Action for Childhood Arrivals (DACA) that former President Barack Obama initiated in 2012 as an executive order.

This tested Grijalva’s life-long Olympic aspirations last year after he ran 13:13.14 in the 5,000 meters at the NCAA Championships on June 11, meeting the Olympic qualifying standard merely a week-and-half before the qualification period ended. 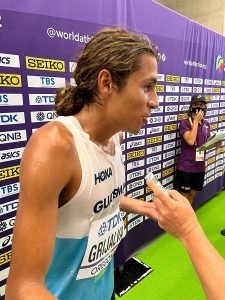 Grijalva, who was born in Guatemala and was once an undocumented immigrant, is now protected under the Deferred Action for Childhood Arrivals (DACA). (Photo by David Veenstra/Cronkite News)

Smith and Grijalva hired an immigration lawyer on July 1 and in a process that normally takes months, Grijalva received a permit on July 25 to lawfully exit the United States.

On July 28, Grijalva flew to Tokyo, his first time out of the United States since an infant, and on August 3, he ran in 5,000-meter qualifying – securing a place in the final.

“Last year, I was just happy to make the final,” Grijalva said Sunday. “Last year I was happy just to go to the Olympics. I didn’t think it was a dream until a couple of days before I got to the Olympics.”

Grijlava hasn’t seen his biological brothers in a decade after they were arrested and later deported due to gang violence. However, in their absence, Nur has since become like family for Grijalva.

“He’s my brother and we did it together,” Grijalva said. The former teammates and now best friends held hands and raised their arms before the start of Sunday’s final. “And he’s a big success in my journey. And I owe a lot to him and without him I wouldn’t be here.”

Nur shares the sentiment and said it’s been amazing and “he’s been pinching himself all weekend.”

“He is my best friend, my brother,” Nur said. “So to be able to be at the world stage at the final like this together. This feels like a movie, honestly, you can’t ask for anything better.”

Although Nur broke the news Thursday that he signed with Nike and Grijalva runs professionally for Hoka, the two of them – who recently got a house together – are going to continue to live and train together under coach Smith.

“We’re not individuals,” Grijalva said. “We’re teammates, we’re brothers and it just tells you what coach Smith is doing at NAU. You know, he’s a college coach. College coach who got two guys to the final. Isn’t that crazy.”