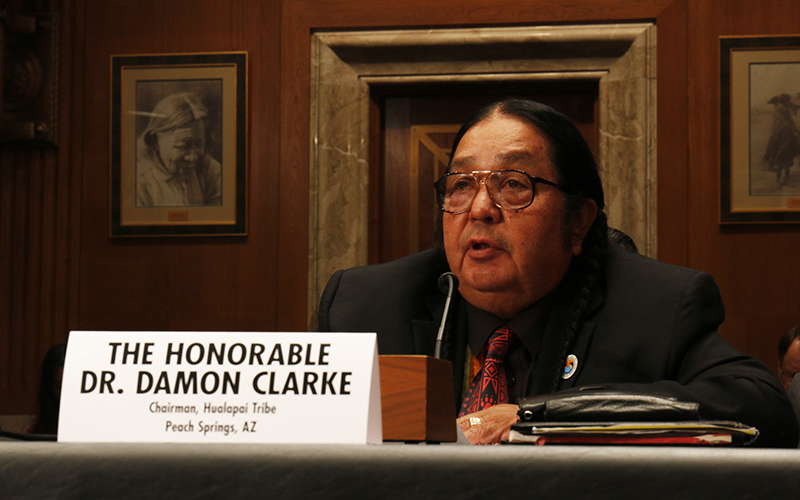 WASHINGTON – Hualapai Chairman Damon Clarke told a Senate committee Wednesday that getting access to Colorado River water is “the only feasible solution” for his tribe, whose wells are failing under the stress of the continuing drought.

The Hualapai Tribe Water Rights Settlement Act of 2022 would give the tribe water rights to the Colorado, Verde and Bill Williams rivers and fund construction of water infrastructure that would deliver about 4,000 acre-feet of water a year to the tribe.

Besides delivering water to the roughly 1,600 Hualapai on the reservation, the project would serve Grand Canyon West and its Skywalk, tribe-owned tourist attractions that Clarke said are major employers of tribal members.

“The Colorado River is the only feasible solution to these problems and the only water supply that can satisfy the longer term needs of our population,” Clarke said in testimony to the Senate Indian Affairs Committee. “The lack of a secure water supply is a major obstacle we still face.”

The Hualapai reservation encompasses around 1 million acres along 108 miles of the Grand Canyon, with the Colorado River serving as the northern boundary. But previous agreements have not allowed water to be drawn from the Colorado for the tribe, which relied on wells for its water.

But a two-decade drought, believed to be the most severe in the Southwest in 1,200 years, has sent water levels at Lake Mead and Lake Powell to historic lows and has dried up the wells and stressed nearby aquifers the Hualapai relied on.

“Three years ago, those wells suddenly failed because of the drought,” Clarke said.

The Hualapai have been working for decades to expand their water rights, efforts that were often opposed by the Interior Department. But Jason Freihage, Interior’s deputy assistant secretary for management, told the committee Wednesday that the department is “pleased to support” the latest bill, which brought a fleeting smile to Clarke’s face.

The bill was sponsored by Arizona Democratic Sens. Kyrsten Sinema and Mark Kelly. Sinema told the hearing the bill provides “long-term stability to the Hualapai tribe’s water needs in northern Arizona, which is especially important as Arizona and the Southwest face historic drought conditions.”

An identical House bill was sponsored by Rep. Tom O’Halleran, D-Sedona, and co-sponsored by Arizona Reps. Greg Stanton, D-Phoenix; Paul Gosar, R-Prescott; Ruben Gallego, D-Phoenix; and Ann Kirkpatrick, D-Tucson. It got a hearing May 12 before the House Natural Resources Committee, but no further action has been taken.

In a statement after the bill was introduced, O’Halleran said it “takes into account tribal sovereignty, the protection of our most precious natural resource, and the growing communities of Peach Springs and Grand Canyon West.”

Besides less-crowded views of the Grand Canyon, the Hualapai owned and operated Grand Canyon West includes the Skywalk, a glass-bottomed walkway that extends 70 feet into the the canyon, with the canyon floor 4,000 feet below. But water shortages have affected the tribe’s ability to keep these tourism services up and running.

“The collapse of these wells have forced us to limit our operations at Grand Canyon West, threatening our tribal economy and the main source of employment for our members,” Clarke told the committee.

To keep operations running, the tribe has had to pump water from an aquifer and haul it “15 miles by truck on a gravel road to get to Grand Canyon West,” Clarke said. “It is the only way we can continue our remaining operations at Grand Canyon West.”

The Hualapai “will help in any way we can to secure enactment of this critical legislation,” said Clarke, who called the bill “absolutely essential if our tribe is to attain a secure future on our reservation, to accommodate future growth of our population and to realize the full economic potential of our reservation.”