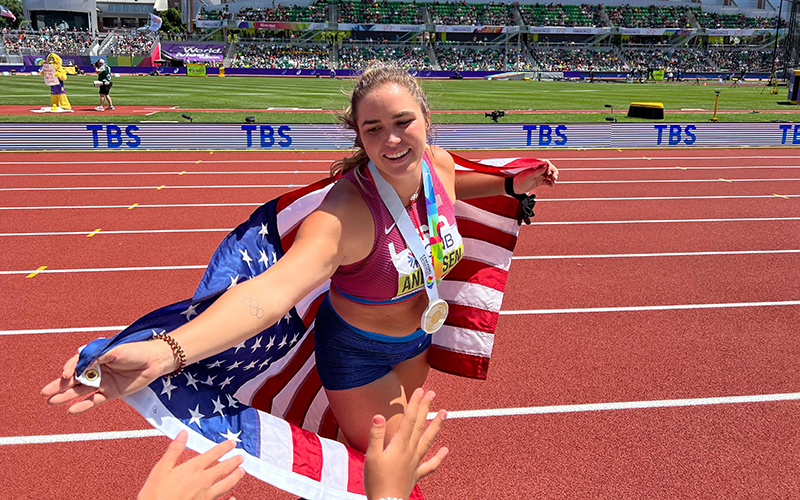 Brooke Andersen is embraced by young fans during her victory lap after winning the women’s hammer throw World Championship at Hayward Field on July 17, 2022. (Photo by David Veenstra /Cronkite News)

EUGENE, Ore. – Brooke Andersen stepped into the ring before her final throw Sunday having already clinched the women’s hammer throw at the 2022 World Championships.

“After (Canada’s Camryn Rogers) threw the last one and I saw the number pop up on the board, I wanted to start crying because I knew what had just happened,” Andersen said. “But the competitiveness in me was like, ‘You still have another throw; you can throw farther.’”

After the release of her last attempt of 78.96 meters, the former Northern Arizona All-American let out a vociferous scream. It was a moment of celebration, and a culmination of Andersen’s hard work from training in Phoenix.

The gold medalist now finds herself with a unique platform after taking the crown at Hayward Field, as no man or woman from the United States had ever won a world medal in the hammer throw before 2019.

“It’s been a lot of sacrifices, a lot of later practices, adding on throws, extra days,” Andersen said. “But it’s all worth it in the end. If this is the outcome, I’d do it 100 times over.”

Andersen, 26, didn’t have a sponsorship deal until she signed with Nike earlier this month. On top of exhausting practice during the day – featuring throwing, lifting and recovery at Grand Canyon University’s facilities – Andersen worked nights at the Chipotle on Camelback Rd. and Central Ave. in Phoenix.

“You just have to manage your time,” Andersen said. “Some of the athletes here aren’t as fortunate to have those big deals so you have to make things work the way they work.”

The NAU grad has been making it work since her senior year at Rancho Buena Vista High School in San Diego. Andersen, previously a discus and shot put thrower in her youth, wasn’t introduced to the hammer throw until connecting with a high school teammate and his dad, who taught her various track and field throwing events. In between soccer team travel games, Andersen practiced on the weekends and after school.

“I was like, ‘I’m always up to try new things,’” Andersen said she told Jay Hibert, her friend’s dad. “So I was like, ‘Yeah for sure. I don’t know if I’ll be good at it,’ but he always said one day I’d be super good.”

Hibert taught her hammer throw and javelin, but Andersen said she picked up the javelin first because it looked “cooler” before back pains led her to the hammer throw.

“I loved how complicated (and) intricate it got, and how you can mess up on something but then do something else well in the throw and it can make it so much better,” said Andersen, who entered the World Championships with the No. 4 world ranking. “And now it’s like little things here and there now that I’m at the level I’m at, but at the time it was just so interesting to me.”

It took a long time for Andersen to reach this championship level. Andersen wasn’t drawing any attention from college track and field programs in the discus, and she only received a few Division-I offers for the hammer. After recruiting discussions with NAU “fell off,” according to Andersen, she started “recruiting NAU” and eventually joined the program on a partial $1,000 scholarship. Undeterred, and not having lifted a single weight until she got on campus, the future All-American earned a full scholarship before her senior year. 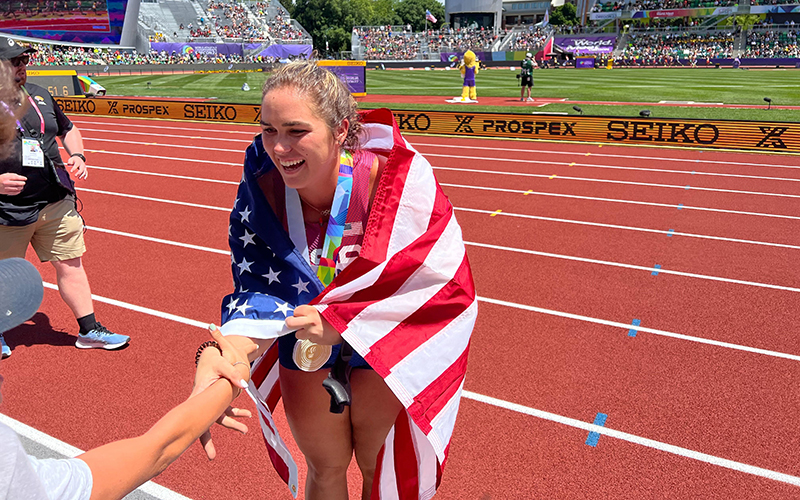 “My goal has always been to inspire little kids as much as I can,” Andersen said after winning the women’s hammer throw World Championship at Hayward Field on July 17, 2022. (Photo by David Veenstra/ Cronkite News)

“Any kids that are listening, you can start from the bottom and work your way up,” Andersen said. “You just need to work hard and stay determined.”

Andersen became the Big Sky Conference record holder and a hammer throw runner-up at the 2017 and 2018 NCAA Championships. After her successful collegiate career, Andersen kept pursuing the sport despite the many roadblocks.

“I knew I wasn’t done,” Andersen said. “I knew I still had a lot left to give to the sport.”

Janee’ Kassanavoid, who won the bronze medal in the hammer throw, said she’s “super happy” for her United States teammate and close friend.

“She’s awesome,” Kassanavoid said. “Just like all of us, in the hammer, as anyone knows, it takes a long time to develop and you just have to be patient and trust the process, train hard and those big numbers are gonna come.”

Andersen worked 60-hour weeks after college while continuing to train in the hammer to earn money, splitting time between GNC and Chipotle. She has since adjusted her schedule to prepare for this year’s World Championships.

Andersen said she currently doesn’t work as often but still maintains her job with Chipotle and fits in hours with her training schedule. Now the reigning women’s hammer throw world champion, Andersen is unsure if she’ll continue to work for a fourth year at Chipotle after she returns to Phoenix.

Her new job is to inspire the next generation of hammer throwers.

“My goal has always been to inspire little kids as much as I can,” Andersen said. “Because you don’t have to start from this great introduction to hammer (or) any of the events here. You can literally start form ground zero and build your way up.

“I just want to show them that if you work hard and stay focused that you can accomplish literally anything you set your mind to whether it’s in track or outside.”