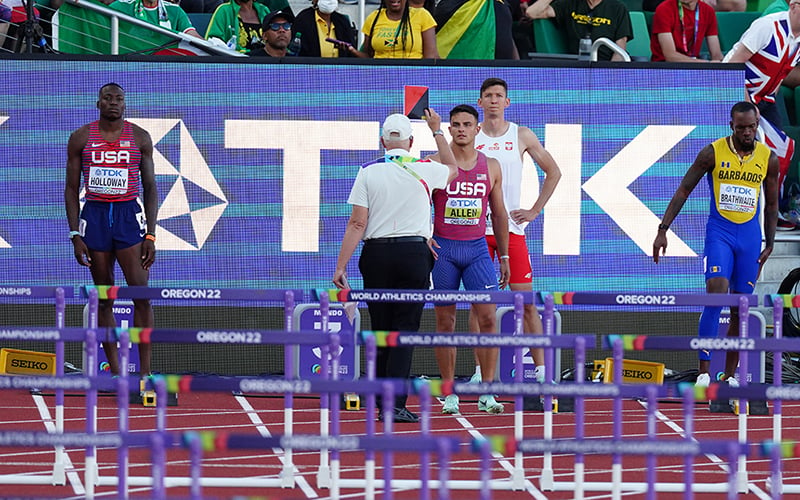 Devon Allen looks in disbelief as he is disqualified ahead of the men’s 100-meters hurdle finals on Day Three of the World Athletics Championships at Hayward Field in Eugene, Oregon. (Photo by Martin Rickett/PA Images via Getty Images)

EUGENE, Ore. – Devon Allen earnestly looked down standing at the starting line, lifted his left hand to his mouth and kissed it repeatedly to pay tribute to his father. The former Oregon wide receiver and NCAA champion hurdler then gestured for the Hayward Field crowd to rise.

A thunderous applause in the backdrop, the Phoenix native brought his right index finger to his lips for a final kiss before firmly placing that same finger back on the outside of his left hand. Allen then took some deep breaths and mouthed,“Come on.”

The starting pistol sounded off, and it looked like a perfect start for Allen from the naked eye. Except it wasn’t.

The starter pistol fired a second time, signaling the hurdlers back to the line.

Allen didn’t jump the gun, but the electronic sensors in the starting blocks determined that Allen left the blocks in 0.099 seconds – 1/1000th of a second faster than the allowable 0.1 time – and officials disqualified the gold medal contender from the 110-meter final Sunday.

“It’s kind of frustrating, but that’s the official’s job and he’s supposed to do his job,” Allen said. “He’s gonna vouch for that, and I can only vouch for myself and that’s what I was trying to do.”

Allen, 27, entered the World Championships final with the No. 2 world ranking and the fastest time of the year. Not only is this the first World Championship on U.S. soil, but it’s where many of Allen’s greatest accomplishments took place.

Allen won two NCAA championships in the 110-meter hurdles with the Ducks at Hayward Field, and Allen caught touchdown passes for an Oregon team that eventually won the Rose Bowl in the inaugural College Football Playoff in 2015.

Sunday was expected to be Allen’s next shining moment before the PA announcement that the false start came from lane three. Allen walked over to the lone monitor in disbelief and tried to plead his case with the officials to no avail. Allen argued crowd noise could have affected his reaction.

“By the rule, a false start,” Allen said. “But it’s just so, so close that there’s a lot of margin of error there. The fact that there’s no, I’m not going to say leeway, but saying the equipment is 100% perfect – 1/1000th is pretty close to the limit. I’m 1/1,000th slower and everybody is happy. Everybody is (saying), ‘Hey great race, world champ,’ and that’s that.

“It’s a little frustrating. There’s a lot of variables in a race.”

The official limit is set by World Athletics at 0.1 seconds. World Athletics’ reasoning for the rule is that humans can’t react in less than a tenth of a second unless anticipating the gun and leaving the blocks too early.

“Initially, my first reaction was maybe that Grant (Holloway) next to me was still going into set, because it was a quick gun and he goes into set a little bit later, so I thought they were just gonna be like, ‘Hey, you can go into set when we say set,’” Allen said. “When I was flagged, I was very surprised, which is also part of the frustration because I know for a fact I didn’t react until I heard the gun. To be 1/1,000th too quick, which I know I’m quick, but it kind of sucks.”

Trey Cunnigham of the United States finished second in 13.08 seconds and said it was “a little bit of drama for a track and field race.”

“We didn’t think he false started — none of the athletes did and we really wanted him to run,” Cunningham said. “We were confused as to why the false start was there. No one was outraged or anything about someone jumping or anything because none of us want to come back after the gunshot. We thought he should have stayed. Even the people that were in the stands next to us were like, ‘He should be in the blocks.’ I don’t think that’s because he’s an American; I think it’s because he didn’t false start.”

Added Grant Holloway, who won gold for the United States in 13.03 seconds: “I’m on Devon’s side. I didn’t think he false-started at all. … My hat goes off to Devon. Didn’t want to send him out like that but it is what it is.”

Despite being one of the favorites for a medal, Allen standing on the podium wasn’t a forgone conclusion. Allen injured his hamstring Wednesday and said he couldn’t do anything until the first round Saturday.

“My hamstring has been kind of holding together and I did everything I could to make it through the semi(s) (and) to the final,” Allen said, “So it’s frustrating I didn’t get the chance to race.”

It also wasn’t a forgone conclusion Allen would make it onto team USA, either.

Just like at Worlds, Allen held up the backside of his left hand and tapped it with his right index finger during introductions before the start of the 110-meter hurdles final at the 2022 USA Outdoor Track and Field Championships.

Several hours before the first round of the outdoor championships on June 25, Allen found out his father passed away. The Allen family is still awaiting an autopsy for the official cause of Louis’ death.

“It’s a lot to handle three hours before you race, so I tried to just compartmentalize,” Allen said Saturday after winning his 110-meter hurdles heat in the first round at the World Championships to advance to the semifinals.

Louis Allen Jr, 63, felt ill for several weeks before outdoor nationals, but Bernadette Allen, Louis’ wife, kept his health condition a secret so the hurdler could focus on track.

Allen received the news about his father after talking to his family the morning before his first round race at the USA championships, but his goal remained the same: to qualify for the world championships.

“It would have been kind of a waste to not (try and make the team),” Allen said.

However, the final of the U.S. Championships was less straightforward for Allen. After crossing the line in a photo finish, Allen had to wait nearly a minute before receiving confirmation he was headed back to Eugene for the World Championships – by 0.03 seconds to finish third in 13.087 seconds.

“I know my dad would be excited for me to win Worlds and break the world record and play for the Eagles and catch touchdowns,” Allen continued Saturday. “So I’m gonna keep doing exactly that.”

Allen will report to Eagles camp on July 26 after the organization signed him to a three-year deal in April, when he ran the 40-yard dash in 4.35 seconds at Oregon’s Pro Day in Eugene. Allen, a former four-star recruit from Brophy, hasn’t played football since his last season with Oregon in 2016.

“I’m used to competing at a high level, and that’s one thing I can take into this NFL team,” Allen said. “I’ve been a professional for six years now. I know how to treat it professionally. I know how to act. I know how to recover. I know how to sleep. I’m not going to be getting a little bit of money and going out to the club during the week when I’m trying to focus and do all that stuff.”

Allen also played football and ran track while at Brophy College Prep, so juggling both sports is nothing new to him.

“He’s a super talented football player,” said Brophy College Prep football and track coach Bill Kalkman, who was Allen’s track coach and offensive coordinator during his junior year. “It’ll be really fun to see this transition take place that’ll come up here these next few weeks and see how that goes with Philadelphia.

“He’s got a great attitude and he’s got great work ethic and he’s a really highly skilled athlete, so he’s gonna put that stuff to work as he applies it to taking his technical work and his speed on the hurdles and put it to the football field. I’m really confident he can do it.”

While Allen reports to Eagles camp next week, the hurdler who placed fifth at the Rio Olympics and fourth at the Tokyo Olympics isn’t abandoning track anytime soon.

“I’m hungry for everything I do,” Allen said. “My goal is to be the best hurdler ever and I still have a chance to do that. And my goal is to play in the NFL and help the Eagles win the Super Bowl.”