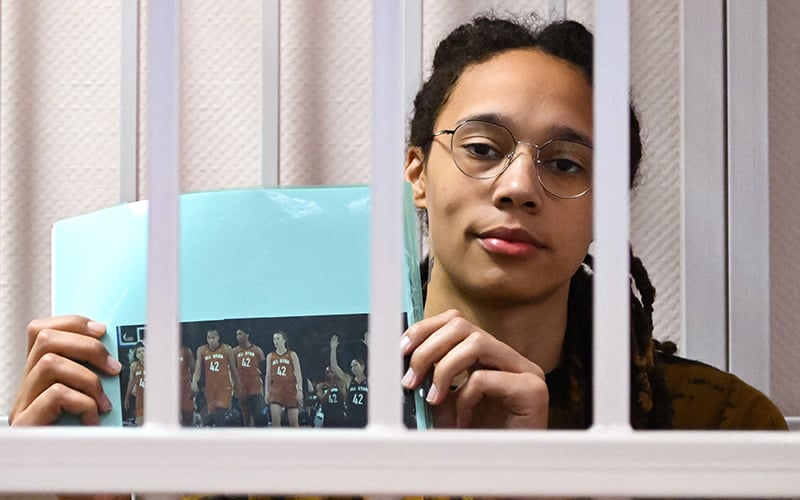 The latest developments include Griner pleading guilty in a Moscow courtroom earlier in July. On Friday, Griner’s lawyer gave the Russian court a U.S. doctor’s letter that recommended her to use medical marijuana for any pain symptoms.

“I was in a rush packing and the cartridges accidentally ended up in my bags,” Griner said.
Griner wore a faded yellow Nirvana T-shirt and sat inside a defendant’s cage in the courtroom. At one point, she held up a photo of WNBA All-Star players wearing her name and jersey number on their uniforms in the All-Star Game this month in Chicago to show support.

This decision to plead guilty was likely the best move for Griner. There is reportedly a 99% conviction rate in Russian criminal cases. She could spend up to 10 years behind bars, if convicted. Griner will testify at a later date.

Asked about the possibility of Griner being swapped for a Russian prisoner in the U.S., Deputy Foreign Minister Sergei Ryabkov, the senior Russian diplomat, has noted that “there are no formal or procedural reasons to talk about any further steps” until her trial is over.

Griner’s defense presented its case Thursday and Friday – the third and fourth days of the trial. The defense brought three witnesses – all of whom represented the Russian team UMMC Ekaterinburg, who Griner played for during the WNBA offseason. The three representatives were Maksim Ryabkov, the club’s director of operations, Yevgeniya Belyakova, a captain for the team and a former WNBA player, and Anatoly Kalabin, the team’s longtime doctor. 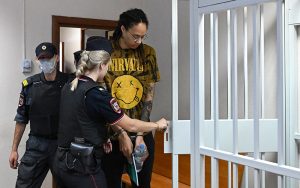 Phoenix Mercury center Brittney Griner, while inside a defendants’ cage, holds up a picture of WNBA All-Stars all wearing her number (#42) on their jerseys at the All-Star game in Chicago (Photo by NATALIA KOLESNIKOVA/AFP via Getty Images)

“Our task today was to tell the court about her characteristics as an athlete, as a person – tell about how she played a big role in the success of the Ekaterinburg club and Russian women’s basketball as a whole,” Ryabkov told reporters outside the courthouse. “Today is the first day when we have seen our basketball player since February. Thank God, she feels well, looks good.”

Said Belyakova: “I can say that Brittney has always been a very good teammate, so my role here is just to be with her, to support her. We miss her very much. We miss her energy. I was very happy to see her, and I hope this trial will be over soon and with a positive outcome.”

Diana Taurasi, Griner’s teammate with the Mercury for the past nine seasons, played for the same Russian team from 2012 to 2017, and has spoken with Ryabkov recently.

“Maks is a big piece of Russian basketball,” Taurasi said after Thursday’s game against the Mystics. “I have a great relationship with him. We talk pretty often. I think they have the same sentiment as we do – wanting BG obviously to come home. She’s been a big part of Russian basketball. She’s done a lot for the country.

“I chatted with [Maksim] a little bit [on Thursday]. He said they made eye contact [with Griner] and he saw a smile on her face. I’m sure that meant a lot to her for them to be there to defend her character and everything she’s done for them. So, hopefully this is all trending to a place where we can get her home as quickly as possible.”

Mercury first-year head coach Vanessa Nygaard, who has yet to see her star center, expressed her sentiments regarding the UMMC Ekaterinburg representatives at this Russian drug possession trial.

“It speaks to what a great person BG is and what a terrible situation that she’s in,” Nygaard said Thursday. “It’s wonderful to see them do that as an extension of our basketball community and the care that they have. That’s how you know their teammates. Those are their teammates. Most of their players just know how we feel. They feel that too, so I’m extremely grateful for those teammates and coaches to testify on their behalf and for all the people that are being outspoken and making this continue to be a forefront of the news story.”