Fans hold signs referring to Mercury center Brittney Griner, who has been detained in Russia for more than four months on drug charges, ahead of a Fourth of July game against the Los Angeles Sparks at Crypto.com Arena. (Photo by Meg Oliphant/Getty Images)

LOS ANGELES – On the Fourth of July, a day when Americans celebrate their independence, Phoenix Mercury center Brittney Griner remained imprisoned in Russia.

The international story has followed the Mercury all season, but it was especially poignant on Independence Day as news broke that Griner had sent President Joe Biden a handwritten letter asking for her freedom.

“As I sit here in a Russian prison, alone with my thoughts and without the protection of my wife, family, friends, Olympic jersey, or any accomplishments, I’m terrified I might be here forever,” Griner wrote.

On Tuesday, White House press secretary Karine Jean-Pierre spoke about President Biden’s reception of the letter during a press briefing.

“The President did read the letter,” Jean-Pierre said. “This is an issue that has been a priority for this president.”

The briefing came several hours after Brittney Griner’s wife, Cherelle Griner, appeared on “CBS Mornings with Gayle King” to speak about the letter.

“I think the decision for her to feel the need to directly reach out to president Biden is because of the failed attempts that we have had as a family,” Cherelle Griner said. “She knows that we are doing everything that we can in our own strength to meet with the president and to request that they do everything they can to get her home.”

That Brittney Griner is still detained, coupled with previous failed attempts to initiate contact between her and her family, as Charelle said, made the extent of the Biden administration’s priority the topic of scrutiny at Jean-Pierre’s briefing.

Jean-Pierre was asked about Cherelle’s comments regarding the failed contact attempts, to which she responded there had been communication between the State Department and Griner over the weekend.

“I do want to share that on Saturday, Mrs. Griner spoke with national security adviser Jake Sullivan,” Jean-Pierre said. “That is their second call in the past, about, 10 days that they have spoken. Secretary (of State Anthony) Blinken also spoke with Mrs. Griner as well, recently.”

She also reiterated that there has been communication between the government and Griner’s family.

“The White House is closely coordinating with the special presidential envoy for hostage affairs, who has met with Brittney’s family,” Jean-Pierre said.

Phoenix Mercury coach Vanessa Nygaard had the chance to read the letter prior to her team’s Fourth of July game against the Los Angeles Sparks.

“It made me cry,” Nygaard said.

Nygaard wore her black and orange “We are BG” lapel pin during her media availability and for the duration of the game. Sparks interim head coach Fred Williams wore the same pin during the game as well.

Griner’s letter made specific references to the United States’ day celebrating the idea of freedom.

“On the Fourth of July, our family normally honors the service of those who fought for our freedom, including my father who is a Vietnam War Veteran,” Griner wrote. “It hurts thinking about how I usually celebrate this day because freedom means something completely different to me this year.”

“Just hearing her words,” Nygaard said. “Talking about her father being a Vietnam vet, her new perspective on freedom, her wanting to be with her family and her teammates, her not knowing if she’ll ever be free again, on our day of freedom … hopefully some people are paying attention to it.”

Cherelle Griner told CBS that Brittney “cherishes the Fourth of July. Her dad was in the Vietnam War, she’s an Olympian … she cherishes this holiday.”

The irony of celebrating Independence Day while Griner is without independence was not lost on anyone in Crypto.com Arena. There were a plethora of T-shirts and signs all throughout the stands. A sizable section of Mercury fans near their bench was the most vocal, with one particular sign situated right behind the players held high for all to see.

“BRITTNEY GRINER SHOULD BE HERE.”

It is becoming increasingly obvious that the shirts, pins, signs and other pre- and post-game messaging can only do so much.

“I realize you are dealing with so much, but please don’t forget about me and the other American detainees,” Griner wrote, addressing President Biden. “Please, do all you can to bring us home. I voted for the first time in 2020 and I voted for you. I believe in you. I still have so much good to do with my freedom that you can help restore.” 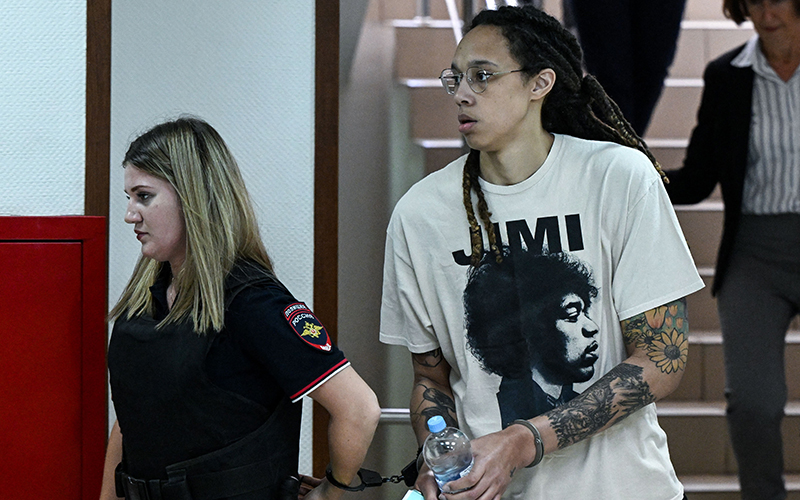 Griner wrote a letter to President Joe Biden that said, “As I sit here in a Russian prison, alone with my thoughts and without the protection of my wife, family, friends, Olympic jersey, or any accomplishments, I’m terrified I might be here forever.” (Photo by Kirill KUDRYAVTSEV / AFP)

Nygaard said, “It’s great that she was able to get that message to us. The Biden administration and our State Department putting that at the front of their messaging would be amazing for us.”

Secretary Jean-Pierre said there is a methodology the Biden administration and State Department is using to try to get Griner and other American detainees in Russia home.

“(President Biden) believes that any U.S. national that is held abroad, or detained, or held hostage abroad, we need to bring back safely,” Jean-Pierre said. “We are going to use every tool we possibly can to make that happen. … She should be home, as well as Paul Whelan, who is being held, and any other U.S. national who is being wrongfully detained abroad.”

Still, ever since Cherelle Griner’s interview on CBS, some questioned why a letter even felt necessary to Griner for this to get done.

Jean-Pierre said the work the Biden administration was doing to get Griner home was just as substantial as the work they did to bring home Trevor Reed, an American who was released from Russia in a prisoner swap in April of this year.

“You saw the work that (Biden) administration did to bring home Trevor Reed,” Jean-Pierre said. “The same work, the same focus that we put behind bringing Trevor Reed home we’re going to do the same with Brittney Griner and others.”

Confirmation that president Biden has read the letter will be welcome words to her family and teammates. Mercury coach Vanessa Nygaard made it clear on July 4 that one of the most important things Griner’s story needed was attention, both from the media and the government.

“There have been lots of people putting attention to it, but there are more people out there,” Nygaard said. “There’s more that can be done. Just hopefully this message on this important day for us will amplify it.”