PHOENIX – Gov. Doug Ducey on Wednesday signed a bill investing more than $1 billion into efforts to augment and preserve water supplies in Arizona as the Southwest remains in the grip of a drought that has lasted more than two decades.

“Arizona will now be able to acquire, own and store new water, and we will invest heavily in conservation, efficiency, reuse and advanced water technologies like desalination,” Ducey said after signing Senate Bill 1740. “These assets have the potential to preserve millions of gallons of water every year, and they will protect our Colorado River entitlements.”

SB 1740 – sponsored by Sen. Sine Kerr, R-Buckeye, and supported by legislators on both sides of the aisle – also reestablishes the Water Infrastructure Finance Authority of Arizona as a state agency and empowers it to form partnerships for water supply projects. The agency also will control funds for conservation efforts.

Arizona is one of seven states in the Southwest that get much of their water from the Colorado River, which is overallocated and under duress from climate change.

According to the U.S. Drought Monitor, most of Arizona is in severe to exceptional drought – the most extreme rating. And Lake Mead, which serves the Southwest and is the largest reservoir in the U.S., hit 1,042 feet above sea level, its lowest since it was filled in the 1930s. If the level drops to 895 feet, water can’t be released through the dam, which also would end production of hydroelectricity. 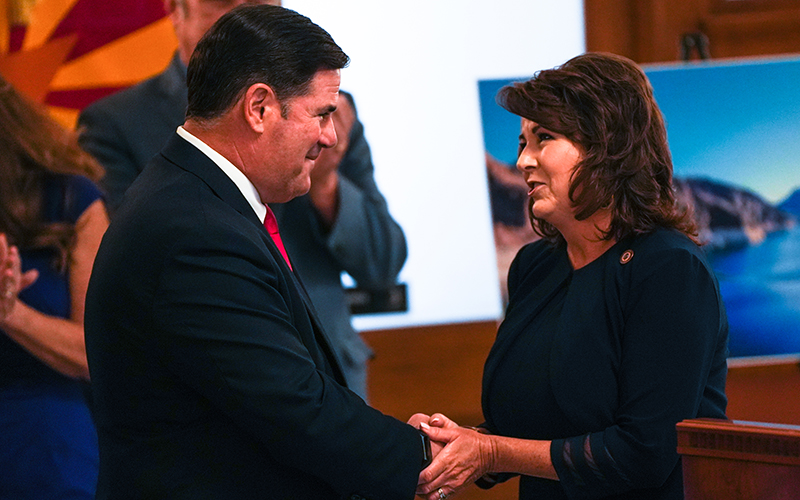 “We have prepared and prepared and prepared, and now we’re going to have to use that preparation,” said House Speaker Rusty Bowers, a Mesa Republican who’s running for the state Senate. “Now it’s also time to conserve what we have, use it correctly, make sure we’re technologically perfect for the task and start augmenting our future water supplies.”

The bill sets up three funds for water conservation, said Senate President Karen Fann, R-Prescott. One is a $200 million fund focused on conservation efforts on water already in the state. Another is a fund of just less than $200 million for short-term goals, such as rainwater harvesting and converting flood water into drip irrigation. The third fund will include $800 million to $1 billion for long-term goals, such as a salination project or importing water into the state.

Sen. Sean Bowie, D-Ahwatukee Foothills, said many Arizonans understand the need for “substantive progress” for water conservation and that conservation is not a partisan issue.