Another Arizona election law is being challenged in court, with the Justice Department suing to block a strict voter ID law that requires proof of citizenship for both federal and state voter registration applications. The Supreme Court struck down a similar Arizona law in 2013. (File photo by Natasha Khan/Cronkite News)

It’s just the latest legal challenge to election laws in Arizona, which have landed before the Supreme Court twice in recent years – winning once and losing once – in what has become a frustrating “broken record” for some advocates.

But Arizona Attorney General Mark Brnovich welcomed the opportunity to defend the law that supporters call a “common sense” defense against fraudulent voting.

HB 2492, which is scheduled to take effect in January, would require that election officials reject the registration of any voter who cannot provide proof of citizenship through a driver’s license, birth certificate, passport or other approved documents. It would also require would-be voters to show proof of residency in order to get a ballot at a polling place.

The law would apply to voters registering for state and local elections as well as “federal only” voters – those who register using a national voting form that only requires the applicant to check a box attesting to the fact that they are U.S. citizens and eligible to vote. 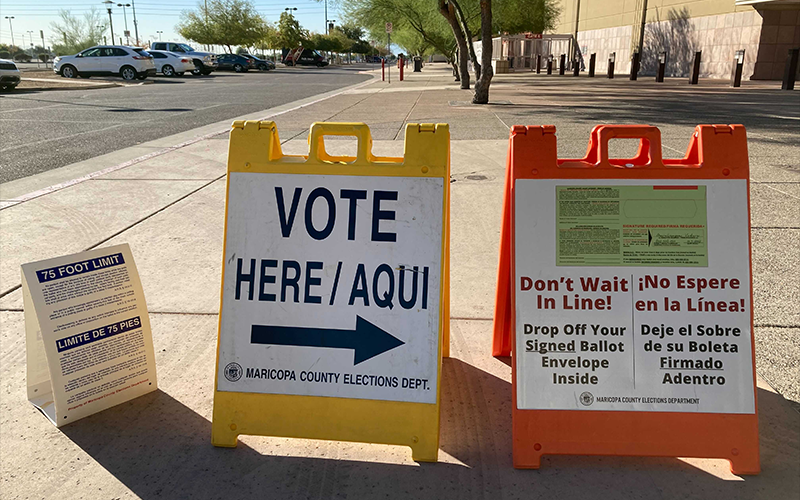 The bill’s supporters claim that system is open to abuse by non-citizens, and when he signed the measure into law in March, Gov. Doug Ducey claimed in a statement that federal-only voters had “risen substantially” in the state, with 13,042 in Maricopa County alone in 2020.

The Justice Department and other opponents of the bill argue that the Arizona law violates both the Civil Rights Act and the National Voter Registration Act. And they say they Supreme Court is on their side.

“Arizona was before the Supreme Court in 2013 and lost 7 to 2 in a lawsuit that cost the state more than $2 million on this requirement and it was struck down,” said Alex Gulotta, Arizona state director of All Voting is Local.

He was referring to the Supreme Court decision in Arizona v. Inter Tribal Council of Arizona, which challenged voter-approved Proposition 200, which required proof of citizenship for voter registration. Justice Antonin Scalia wrote that the National Voter Registration Act requires states to “accept and use” a uniform federal form, and that the law “precludes Arizona from requiring a Federal Form applicant to submit information beyond that required by the form itself.”

Critics say voter ID and other election restriction laws are aimed at suppressing the vote by certain groups, for whom it might be difficult – if not impossible – to provide the required documents.

“The intention is to impact the get out to vote efforts of communities of color,” Falcon said.

She said such restrictions affect young voters as well. When registering voters, she said she has encountered young people who lost driver’s licenses but did not get another one because they did not drive or have cars and did not think they would need it to vote.

Proof of residency requirements can also hinder unhoused, rural and Native citizens’ right to vote. In a March letter to Ducey challenging HB 2492, for example, Navajo officials said there are few street addresses in the Navajo Nation, where most residents use P.O. box addresses for mail.

Critics like the Citizens Clean Election Commission say HB 2492 was based on a “false premise that people who are ineligible to vote for president because of their citizenship status are doing so in significant numbers.”

But supporters say proof of citizenship requirements helps keep undocumented immigrants from voting, a right reserved for U.S. citizens. Brnovich blasted the Justice Department’s lawsuit challenging the Arizona law, saying in a statement that “in addition to free rooms and transportation for those illegally entering our country, the DOJ now wants to give them a chance to vote.”

Brnovich, who successfully defended Arizona’s ban on “ballot harvesting” before the Supreme Court last year, welcomed the chance to “once again be in court defending Arizona against the lawlessness of the Biden administration.”

Gulotta sees it differently, saying state officials were warned that HB 2492 was unconstitutional.

“When you’re the governor and you sign a bill that you know is illegal, you should expect to get sued,” he said.

His organization was one of many that protested Ducey’s signing of the bill, including Secretary of State Katie Hobbs, the nominal target of the Justice Department suit. She said in a statement Wednesday that she has “made it clear from the start that I did not think that this law was constitutional or good policy.”

In a letter to Ducey in March, Hobbs said that not only did the measure “create new barriers for voters that are disconnected from any legitimate election integrity purpose,” it also violated “clearly settled federal law.”

While the lawsuit does not surprise advocates, it also frustrates some like Falcon, who said she hopes courts will block it so the state can move on.

“We’ve been trying to heal the state from division,” she said. “I pray it does not move forward and that it gets stalled in the courts sooner than later.”