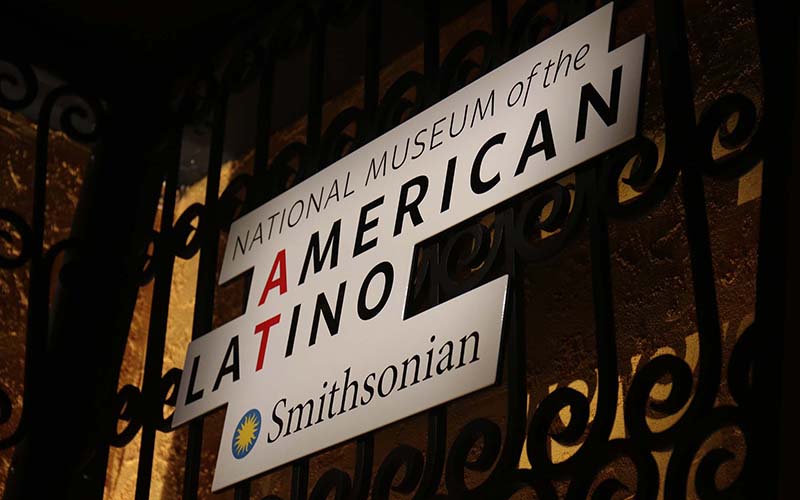 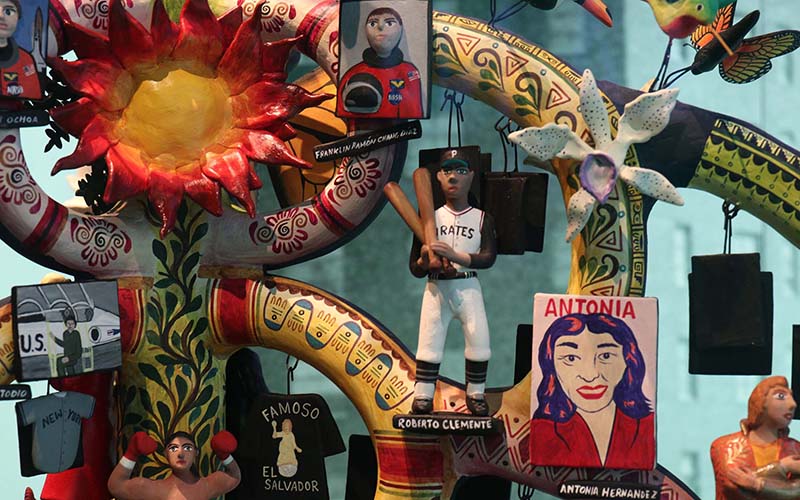 “¡Presente!,” which opened on June 22 and runs for two years, includes displays on immigration, Latino identity and Latino history in the U.S., with exhibits showcasing famous Latinos across of variety of fields. (Photo by Morgan Fischer/Cronkite News) 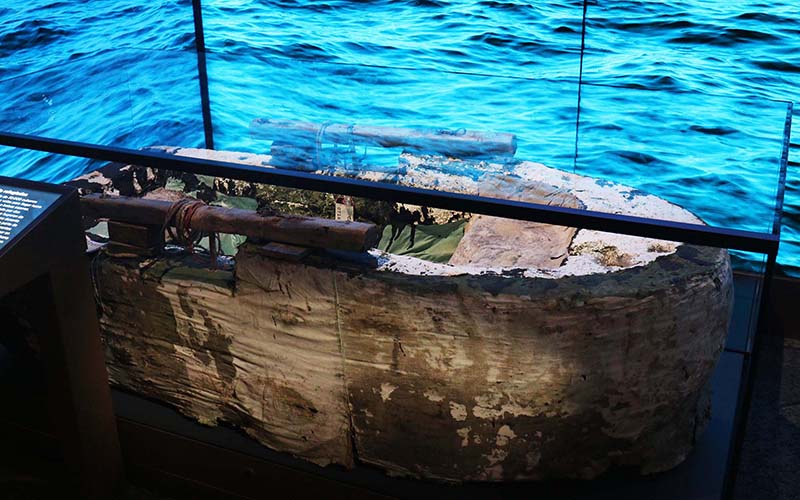 This boat, used by Cubans fleeing to the U.S., constitutes a “wow moment” for many visitors to the exhibit. Made of Styrofoam, tar, cloth, rope, wood and plastic, it’s 2 feet wide and just over 6 feet long. (Photo by Morgan Fischer/Cronkite News) 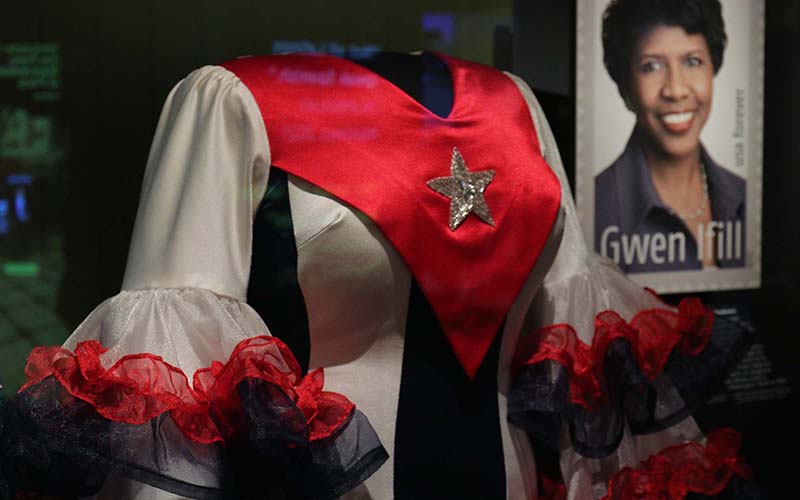 Among the displays at “¡Presente!” is a dress word by Cuban singer Celia Cruz. The 4,500-square-foot gallery space in the National Museum of American History will host a series of exhibits until a permanent Latino museum is built. (Photo by Morgan Fischer/Cronkite News)

WASHINGTON – The dusty backpack and sneakers left in the Sonoran Desert by a migrant are displayed right between the multicolored graduation stole and the stylized “tree of life” adorned with images of historic Latino figures.

It’s a lot to pack into one exhibit. But “¡Presente! A Latino History of the United States” has a big story to tell.

“Latino History is American history,” said Melinda Machado, the National Museum of American History’s director of communications. “We want to show that we’ve pretty much always been here.”

It’s taken years just to get to this point. The idea for a museum arose in the 1990s and a bill to create a commission to study the idea was first introduced in 2003. A bill calling for creation of the museum was introduced in 2011, and it finally became law when it was rolled into the 2021 federal budget bill that President Donald Trump signed in December 2020.

While that was plodding along, five Molina family siblings donated $2 million each to the Smithsonian Latino Center in 2015 to create a museum space to honor their parents, Mary and C. David Molina. He founded Molina Healthcare Inc., a Fortune 500 company in Long Beach, California, in 1980. 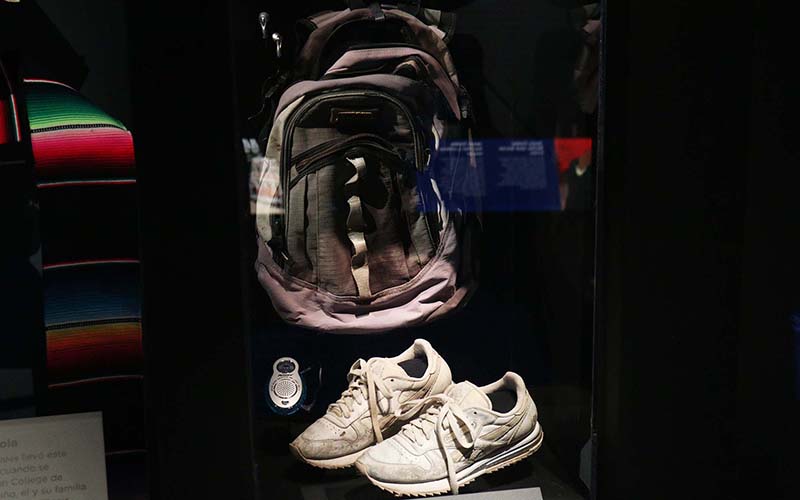 “¡Presente!” includes sneakers and a backpack left by a migrant in the Sonoran Desert. (Photo by Morgan Fischer/Cronkite News)

“My parents are now a permanent part of one of the most important institutions in American history. (It) was something I’d never dreamed of,” said John Molina, one of the siblings and CEO of Pacific6. “It was just very profound and really shook me.”

Since then, the Smithsonian Latino Center has become the National Museum of the American Latino, and ¡Presente! became its first exhibit while the museum looks for a home.

The current exhibit in the Molina Family Gallery looks at how colonization, slavery and war impacted Latino communities, at the immigration stories of the many individuals making their way to the U.S., at the varying Latino experience and at ways members of the Latino community have shaped America as a nation.

“The gallery itself is a great encapsulation of Latino culture, it is colorful, great storytelling,” Molina said.

Machado said the “wow moment for a lot of visitors” is a boat used by Cubans escaping to the U.S. It’s cobbled-together “Styrofoam, tar, cloth, rope, wood and plastic,” according to the exhibit, that is 2 feet wide, 3 feet deep and a little more than 6 feet long.

“It’s a tiny little thing,” said Molina, who said it shows the resiliency of the Latino community. “A 90 miles ride on the ocean in this thing, that tells you how much people wanted to get here.”

Other parts of the exhibit include a dress worn by singer Celia Cruz and another worn by a Colombian drag queen, political posters and religious icons, paintings and sculptures.

The gallery includes the Somos Theater, a learning lounge and interactive screens where Latinos tell their histories. Gallery creators put a large emphasis on accessibility, with all content available in English and Spanish, and visitors able to use their phones and keypads to access visual descriptions through the gallery.

“We placed a premium to make sure that this gallery was as accessible as possible to visitors who are blind … or who are deaf or have a hearing impairment,” said Eduardo Díaz, the Latino Museum’s deputy director.

The current exhibit will run for two years, and be followed by an exhibit about Latino youth activism. Work on it is already underway, Díaz said.

The first challenge is finding a site. The Smithsonian on June 22 announced four possible sites for both the National Museum of the American Latino and the American Women’s History Museum: the Smithsonian’s current Arts and Industries Building, and sites north of the Capitol Reflecting Pool, across from the African American History Museum and near the Tidal Basin.

Díaz said “all four sites have tremendous potential,” but he didn’t single one out as a favorite.

The second challenge is funding: The museum is expected to cost $600 million to $800 million, with half the funding from Congress and the other half from private and philanthropic donations. Díaz said the museum has already raised $28 million.

In addition to historical and political displays, “¡Presente!” includes artworks with artifacts of religious and everyday life. (Photo by Morgan Fischer/Cronkite News)

Molina, for one, is not daunted by the challenge.

“I want to see our own building and it’s not going to happen tomorrow,” he said. “But Latinos have been around forever and we have persistence and resilience and I’m very confident … that it can be done.”

Díaz believes the museum will be successful no matter the location, citing the Molina Gallery as proof.

“If we can do that with 4,500 square feet, I’m sure we can take whatever space or building that is designated for the Latino Museum and turn it into something quite special,” Díaz said. “This is proof positive that we can do it.”

That was echoed by Michael J. Lopez, a tourist from New York, who said after a recent visit that the exhibit is “fantastic” and “overdue.” He said he is “happy that the United States is really recognizing the contributions that Latinos have made within the United States.”

Díaz hopes visitors learn more about Latino culture and the community, whether they are Latino or not.

“If people come in here and actually learn about our presence and our contributions and learn how Latinos have literally built this country and shaped national culture,” Díaz said. “If they come away with a sense of that, I think we have achieved some success.”