Pyraddiction, the host of the Native Drag Show at the Heard Museum on June 3, 2022, introduces each performer and interacts with the audience. (Photo by Audrianna Smith/Cronkite News) 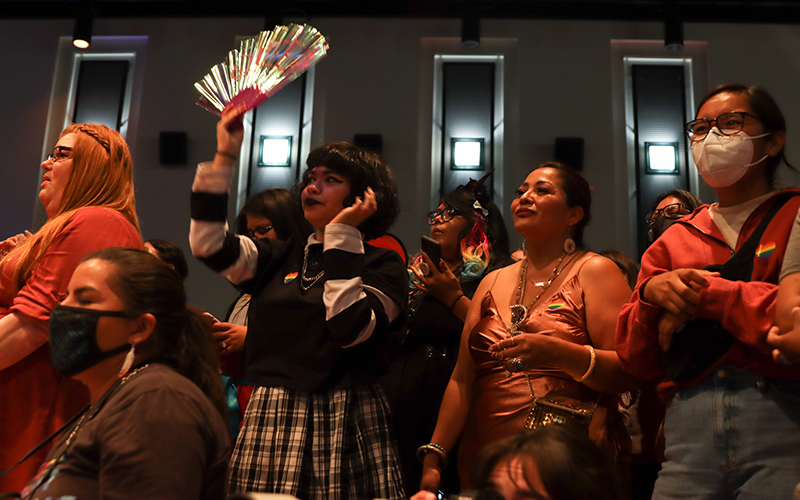 An audience member holds a fan with “queer” written on it in support of the Indigenous drag queens performing in the Heard Museum’s Native Drag Show on June 3, 2022, in Phoenix. (Photo by Audrianna Smith/Cronkite News) 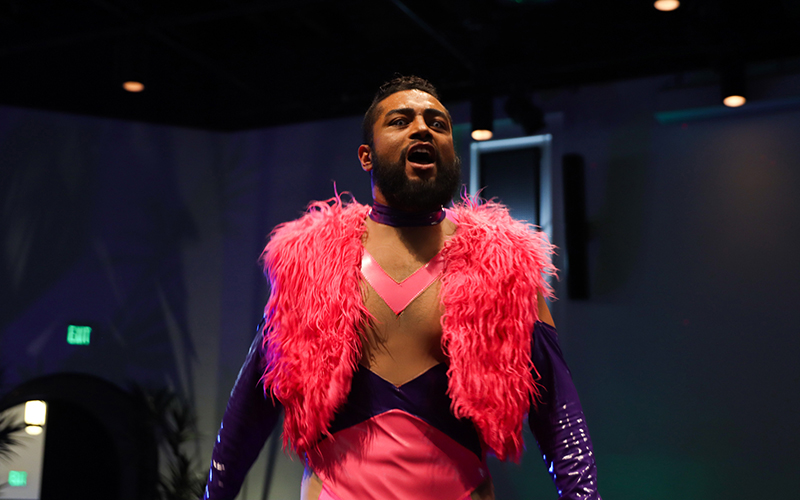 PHOENIX – As the audience screamed its enthusiasm, the click of heels echoed across the hall. Indigenous drag queens took the stage to perform classic pop songs – gratefully accepting dollar bills from fans in the front row.

The Heard Museum, renowned for showcasing Indigenous art from around the world, opens its doors free of charge on the first Friday of each month. This month, First Friday showcased the museum’s inaugural Native Drag Show, which was limited to Indigenous queens, to celebrate Pride Month.

“I want to make sure the audience is smiling,” said Pyraddiction, who hosted and performed in the June 3 show. “If they’re not smiling, I will come to you, perform right in front of you, look into your eyes and make sure there’s that connection.”

After seeing her first drag show at 21, Pyraddiction fell in love with the artform and began participating in drag competitions while creating outfits from anything that could “pass off as drag,” she said in an interview.

Performing with Pyraddiction at the Heard were Miss New Mexico Pride 2022, Tomahawk Martini; Mx Titos Pride 2022, Te D. DeMornay; K.Yasss Savage; Ritavon DeMornay; and drag king Felix. Each lip-synced a pop tune, such as Dusty Springfield’s “You Don’t Have to Say You Love Me” and Gwen Stefani’s “Bubble Pop Electric” – strutting the stage in glamorous attire and interacting with the audience. Whether it was doing the splits or teaching audience members their dance moves, the queens made sure the show was full of dazzle and cheer.

Although the museum had a similar event more than a decade ago, “that was so long ago that Friday night’s show might as well have been the first one,” Erin Joyce, creative and marketing director and fine arts curator for the museum, told The Arizona Republic. The drag show set itself apart with a poetry segment at the beginning, when Indigenous performers took the stage and shared pieces relevant to their experiences as an Indigenous LGBTQ+ person.

A museum isn’t a traditional venue for a drag show. More typical spaces are bars and cafes, such as The Queer Agenda at Kobalt Bar and Viva La Vargas at Karamba Nightclub, both Phoenix – which is one of Arizona’s drag hotspots.

Drag has become a recent front in the political and culture wars, and Arizona is no exception. Last week, Republican leaders floated the idea of legislation that would prohibit minors from attending drag shows, mentioning the Heard Museum show in a press release that cited “​​provocative dance moves” and “scantily clad attire.”

However, many performers find drag the only way to express their true selves – something that was a challenge during the first years of the COVID-19 pandemic.

Instead, Pyraddiction and other local queens hosted digital shows by creating music videos and receiving tips for their performances.

As in-person drag is making its way back, so is Pyraddiction, who takes the stage at a brunch show at Kahvi Coffee & Cafe on Roosevelt Row on the last Saturday of each month. She said she focuses on audience perception and engagement to entertain her fans, regardless of the platform or venue.

For more information on the drag shows in metro Phoenix, browse this list of best shows. 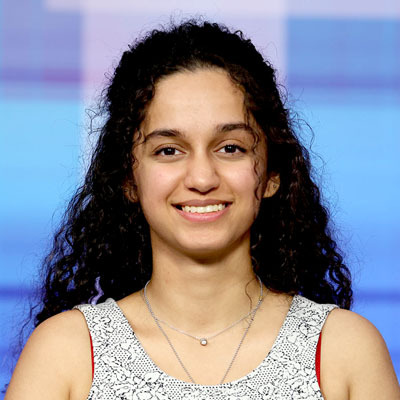 ​​Nikita Chaturvedi expects to graduate in 2024 with a bachelor’s degree in journalism and a minor in business. Chaturvedi, who is interning as a marketing content specialist at Certified Tracking Solutions, is vice president of the Society of Professional Journalists and a member of The Cut Network at ASU. 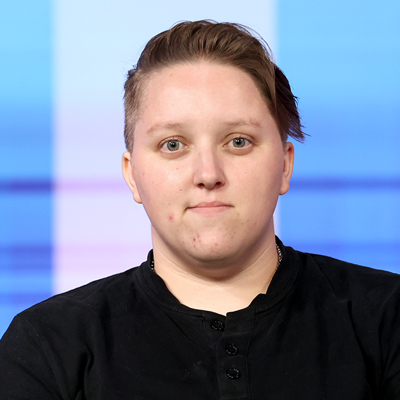 Audrianna Smith expects to graduate in August 2022 with a master’s degree in mass communication. Smith has worked as an audio/video technician for Norwegian Cruise Line and interned at WNPR in Hartford, Conn.