SAN DIEGO – Hamilton High School graduate Gavin Turley is among the talent at the 2022 Major League Baseball Draft Combine hoping to boost his stock in the draft.

The four-day event at Petco Park provides draft-eligible players with an opportunity to participate in pro-style workouts, as well as interview and interact with MLB general managers and scouting directors. High school players also have the option to compete in a series of scrimmages against one another, though Turley opted not to participate.

“Me, my family and the rest of my team feel like scouts have seen what they needed to see,” Turley said. “What I’m really excited about and looking to get out of the combine is just shaking hands and getting to know some of the higher-ups with each team.”

An Oregon State commit and the No. 106 ranked prospect in this year’s draft class by MLB Prospect Rankings, Turley’s huge raw power and hard-hitting offensive capabilities are similar to those of top prospects in the class, scouts believe, but his inconsistent play and swing-and-miss tendencies at the plate are something that will soon need to be refined.

Turley finished his senior season at Hamilton High School as an All-Conference First Team selection with a .317 batting average, plus 15 home runs, 31 RBIs and 37 runs scored. His offensive onslaught helped lead the Huskies to a 29-4 record, Arizona 6A state championship and No. 7 national ranking, according to Baseball America. 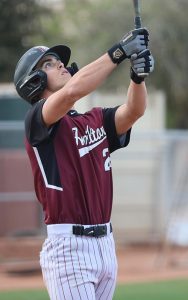 Turley leads off for the Huskies during an early season matchup at Hamilton High School. (Photo by Matthew Legere/Cronkite News)

Along with his offensive skill set, scouts say that Turley’s near-elite speed could help make him an enticing asset in the outfield, according to MLB Prospect Rankings. They recognize Turley’s raw instincts in terms of reads and routes but would like to see him with more reps under his belt, which was a major point of emphasis for Turley and Hamilton coach Mike Woods heading into this season.

“I know that he’ll be known for his power, bat and speed, but the thing that I’m probably going to remember the most is all of those catches that he made in our semifinal game against Chaparral,” Woods said. “He made three or four incredible plays up against the wall in left field and we definitely don’t win that game without him.”

Knowing that scouts would be keeping a close eye on his defensive capabilities, Turley says that he spent this entire past offseason taking anywhere between 100 and 200 fly balls off the pitching machine each day.

“Coming off of last year, I did a little bit of self-evaluation and knew that my defense could 100 percent get better,” Turley said. “I know it sounds simple – and there wasn’t much else to it – but it all adds up pretty quick and doing that made a huge impact on my ability to play defense more consistently.”

Turley now has the chance to join former teammate Brock Selvidge as the latest Huskies players to be selected in the MLB Draft, which is scheduled to begin in exactly one month in Los Angeles.

Selvidge increased his draft stock when he competed in last year’s inaugural Draft Combine and impressed scouts with a mid-90s fastball, striking out five of the 10 batters he faced. Selvidge was later selected by the New York Yankees in the third round of the 2021 MLB Draft.

“It’s pretty crazy to think that I’m even in this position,” Turley said. “Going to one of the top baseball schools in the country but also having that opportunity to get drafted along the way? I mean, it’s a win-win situation that I’m truly blessed to be in and I’ll be happy no matter what the outcome.”