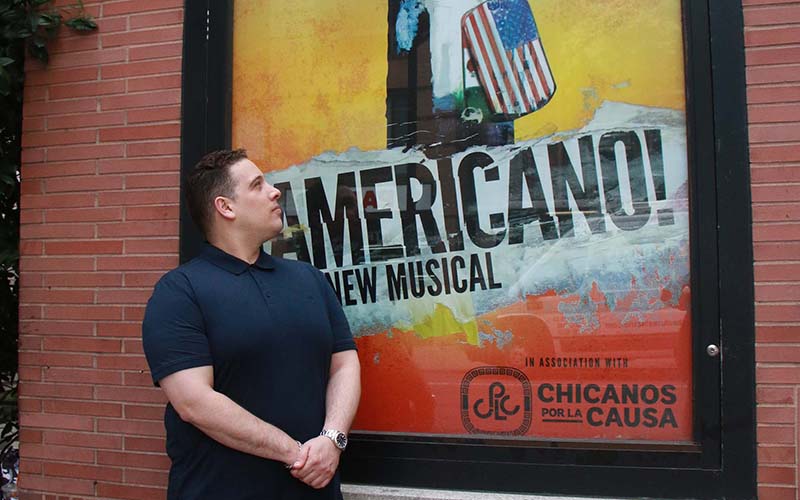 Former Arizona resident Tony Valdovinos at the off-Broadway New World Stages, which is wrapping up a run of “¡Americano!,” a musical based on Valdovinos’ story as a Dreamer. (Photo by Daisy Gonzalez-Perez/Cronkite News) 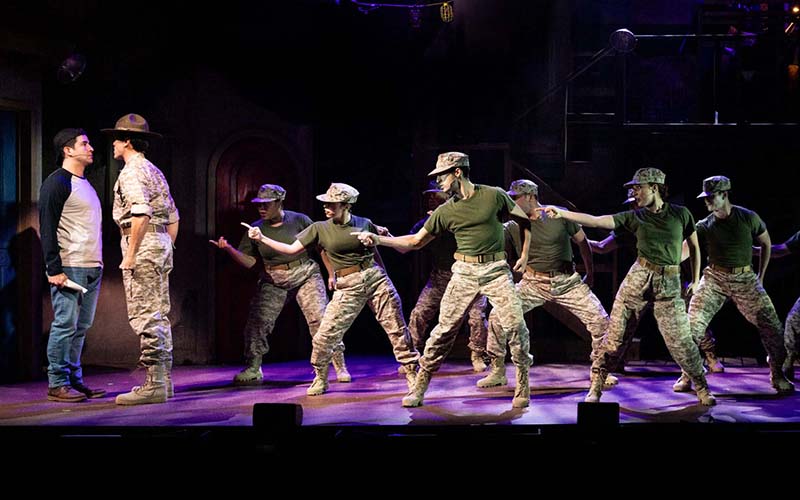 “¡Americano!” tells the story of Arizona resident Tony Valdovinos, who learned he was not a citizen only after he tried to enlist in the Marines, which had been a dream of his. (Photo by Maria Baranova/Courtesy “¡Americano!”) 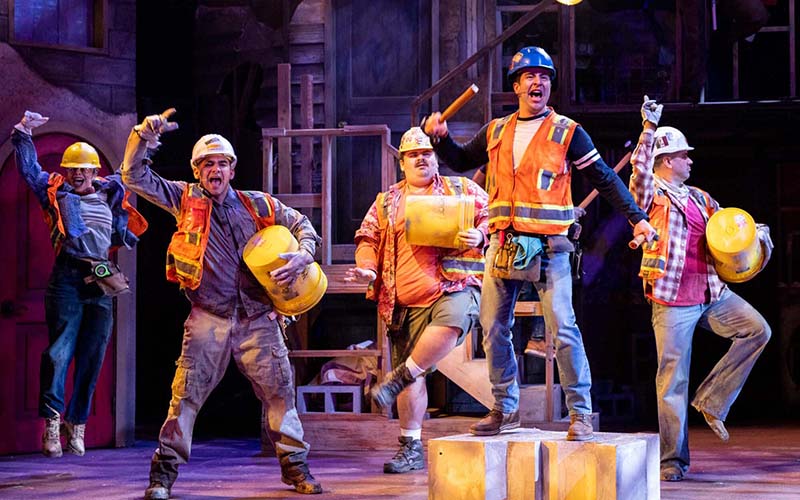 Tony Valdovinos said he didn’t realize he was undocumented until he tried to enlist in the Marines because, while growing up in Arizona, most of the time he worked with his father. (Photo by Maria Baranova/Courtesy “¡Americano!”) 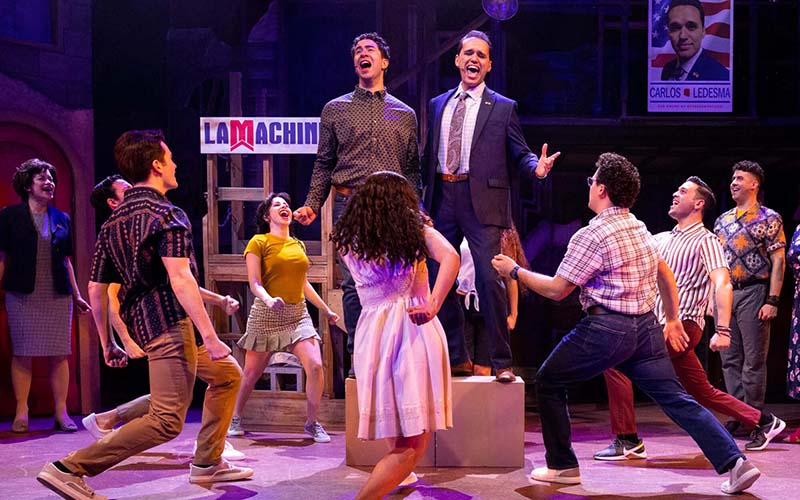 After he learned he was undocumented, and was rejected by the military as a result, Tony Valdovinos put his energies into political organizing, which is reflected in “¡Americano!” (Photo by Maria Baranova/Courtesy “¡Americano!”)

NEW YORK – Tony Valdovinos is sitting outside New World Stages, a performing arts complex in Manhattan where his life story has been taking center stage in the musical “¡Americano!” for weeks now.

The former Arizona resident is talking about the need to continue the Deferred Action for Childhood Arrivals program – what he calls a “saving grace” in his life – and the role his story plays in that fight. And he’s talking about meeting Barack Obama. Again.

“To be sitting (there) a foot away from him having a dialogue, a discussion and sharing that story and telling him we did just that,” Valdovinos said of his “incredible” reunion with Obama. 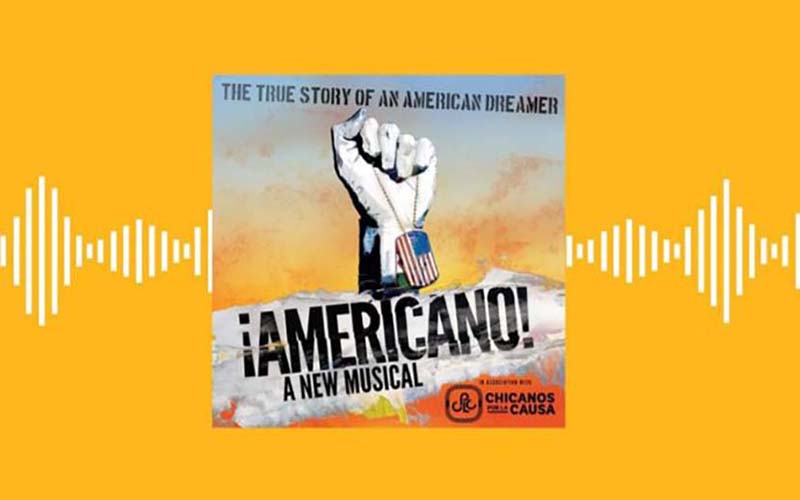 Obama had come to the show to mark the 10-year anniversary this week of DACA, a program that plays as much of a role in “¡Americano!” as Valdovino’s story.

That story has taken Valdovinos, who turns 32 on Sunday, from a Camelback High School senior whose dreams of being a Marine were dashed when he learned he was undocumented, to an immigration activist whose life story is being told in an off-Broadway musical.

“It’s an important year for Dreamers to tell their stories, in this case, now on a global stage,” said Maria Jesus Cervantes, vice president of public relations for Chicanos por la Causa. It partnered with Phoenix Theatre to bring the musical to the stage in Arizona before taking it to New York this spring.

“To tell Tony’s story and so many like him,” Cervantes said, “that despite the barriers that they have, they are able to continue to serve our country through other avenues until they are able to get temporary relief.”

CORRECTION: An earlier version of this story misstated Valdovinos’ age when he spoke with a Marine recruiter, as well as the recruiter’s relationship with Valdovinos’ high school. The story here has been corrected, but clients who used earlier versions are asked to post the correction found here.

The story begins at Camelback High School where Valdovinos, spurred by 9/11, had dreams of enlisting in the Marine Corps. As a 17-year-old senior, he went to a Marine Corps recruiting officer at the school, scared, but eager to enlist and realize his dream.

But when the recruiter determined that Valdovinos, who had been born in Mexico, was undocumented, he told him to leave. He said Valdovinos was wasting the recruiters’ time.

Confused, embarrassed and angry, Valdovinos went home, where his mother finally revealed to him that the family was “never part of a legal process to get documented.” Valdovinos has said that his citizenship had never been an issue to that point, since he mostly worked construction jobs with his father.

DACA is aimed at undocumented immigrants who were brought to the U.S. as children – like Valdovino. The renewable program protects them from deportation for two years at a time, while providing them with the documentation to work, get a driver’s license, go to school and more.

After DACA took effect in 2012, it opened the door for Valdovinos to land a job as a community outreach director with the Phoenix City Council. He left that job to become field director on what would become Democrat Ruben Gallego’s run for Congress in 2014.

It was during that campaign, that Valdovinos was interviewed by NPR about his canvassing work in local politics. A producer at Phoenix Theatre was listening, and the theater’s artistic director, Michael Barnard, reached out to pitch a musical based on Valdovinos’ experience.

“¡Americano!” opened at the Phoenix Theatre in late January 2020. Producers’ goal of taking the show to Broadway were complicated by the pandemic, but it debuted off-Broadway on May 1 at the New World Stages.

The show is not only just about Valdovinos’ life and challenges: It is also a story about Dreamers. That resonates with Sean Ewing, the actor who plays Valdovinos in the musical.

“I think that has always been my passion with this piece, delivering and acknowledging the representation and fighting for what we should be fighting for,” said Ewing.

Ewing, who identifies as Colombian, said the play is important for the Latin community, and for the message it delivers about the thousands of Dreamers “who still dream today about the opportunity to live the American dream.”

“¡Americano!,” which ends its run at New World Stages on Sunday, comes as DACA is turning 10 – an anniversary that sparked Obama’s visit to the theater to meet with Valdovinos and four other DACA recipients – and as advocates are mounting a new push to win immigration reform.

DACA has survived several legal and political challenges over the past decade, but it is far from secure. A federal judge in Texas last year found DACA had been created improperly and ordered the government to stop processing new applications. The Biden administration has challenged that ruling, with arguments set for the appeal in July.

Valdovinos knows there’s more work to be done, noting that he and other advocates have been “organizing for 13 years now and we still haven’t found a solution.” But he plans to continue fighting, using his newfound celebrity to elevate the voices of undocumented immigrants in the U.S.

“So much has gone by, even meeting with Obama, (it) was tough to talk about DACA, to talk about the future and to talk about being hopeful,” Valdovinos said. “I think it was a stark reality of how much more time we have ahead of us.”