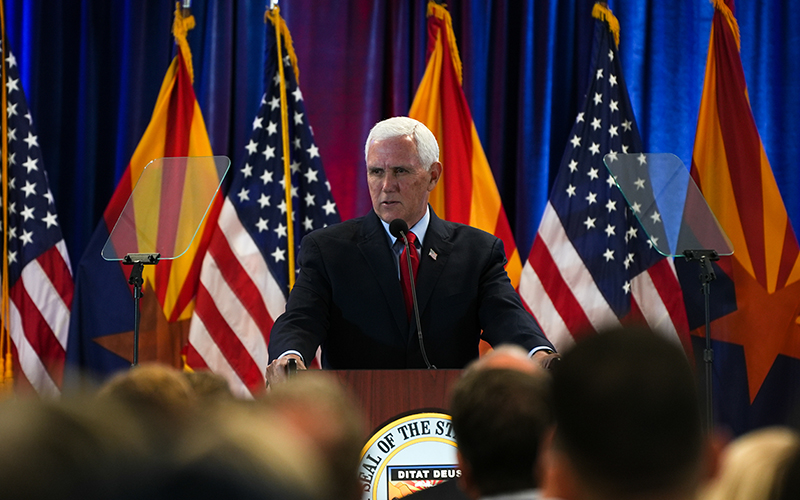 “Under the Trump-Pence administration, our neighbors to the south knew we expected them to do their part to secure their border and ours,” former Vice President Mike Pence tells the Arizona Commerce Authority in Phoenix on Monday. (Photo by Troy Hill/Cronkite News) 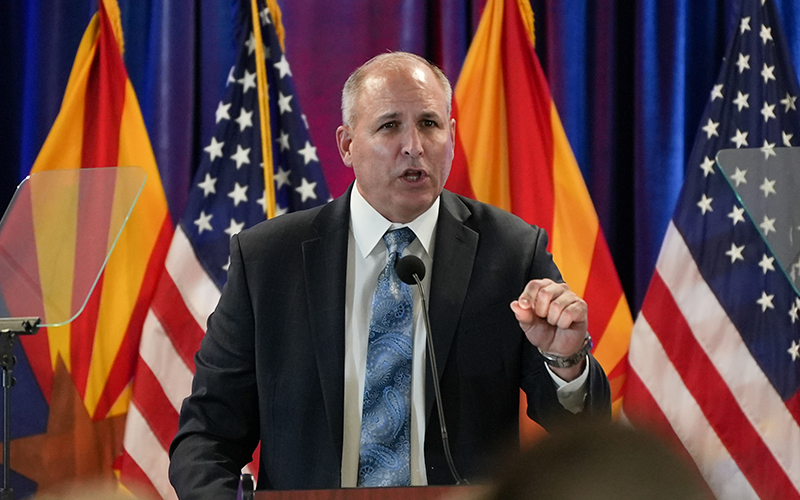 PHOENIX – Former Vice President Mike Pence visited the U.S.-Mexico border in Cochise County on Monday, then addressed a crowd at the Arizona Commerce Authority in Phoenix on his vision for U.S. border security and immigration, which echoed many of the policies of the Trump administration.

“Along our 2,000 mile border is a crisis of epic proportions, and it’s costing lives on both sides of the border,” Pence said, referring to federal agents’ encounters with migrants entering or attempting to enter the U.S. illegally.

In April, the most recent data available, Customs and Border Patrol encountered more than 52,000 migrants trying to enter the country in the Yuma and Tucson sectors – a 54% increase from a year ago.

In his remarks to the commerce authority, Pence said he saw the spot in Cochise County where construction of the border wall stopped, and he spoke with ranchers who lived in the area.

Although he hasn’t announced a campaign for an elected office, Pence outlined an agenda he wanted for the border, including finishing former President Donald Trump’s signature border wall; getting rid of sanctuary cities; rejecting amnesty, recommitting to the Trump administration’s “Remain in Mexico” policy, which forces asylum seekers to wait out their cases in Mexico; and deporting any migrants who entered the U.S. illegally.

“Border security is national security,” Pence said, echoing Mark Morgan, a former acting commissioner of Customs and Border Protection in the Trump administration, who spoke before him at the news conference. “And to keep America safe, we must secure our southern border now and always.”

The visit positions Pence for an expected 2024 presidential run – potentially against his former boss. Neither Pence nor Trump has officially announced a 2024 campaign, however.

Gov. Doug Ducey had planned to accompany Pence to the border and the news conference but tested positive for COVID-19.

“He is asymptomatic and feeling well but will not be attending the border tour and policy address with Vice President Mike Pence,” said Ducey spokesperson Morgan Carr.

​​The meeting would have been significant because both politicians once were close with Trump but have since fallen out of his favor and made moves to distance themselves.

A spokesperson for Trump slammed Pence in a statement before a trip to Georgia in May, saying Trump salvaged his career and that Pence is now desperate to become relevant again. Trump also said he wouldn’t endorse Ducey for a rumored U.S. Senate campaign, which didn’t materialize, after Ducey declined to support Trump’s attempts to overturn the election of President Joe Biden.

Despite their fraught relationship, Pence spoke highly of his time in Trump’s administration, specifically immigration policies.

“The truth of the matter is under the Trump-Pence administration, our neighbors to the south knew we expected them to do their part to secure their border and ours,” Pence said. “They showed respect to America during the Trump-Pence years.” 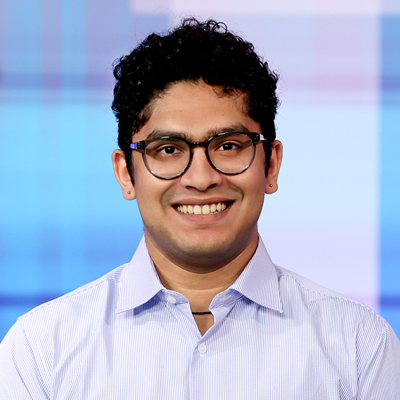 Luke Chatham expects to graduate May 2023 with a bachelor’s degree in journalism and a minor in youth service leadership. Chatham, who reports for the State Press, is working in Phoenix as a broadcast reporter.