The Supreme Court on Monday overturned two cases that had said migrants being held for possible deportation are not automatically entitled to a bond hearing, even if they are held for months. Critics said the rulings open the door to due process violations. (File photo by Nathan O’Neal/Cronkite News)

WASHINGTON – The Supreme Court ruled Monday that noncitizens being held for deportation are not entitled to a bond hearing after months in detention, decisions that advocates said could let the government keep migrants behind bars indefinitely.

The ruling, in a pair of decisions, overturned lower courts that had ordered a bond hearing for one undocumented migrant from Mexico after he was held for six months, and for others who had successfully filed class-action suits demanding bond hearings in such cases.

The first case was returned to the lower court to determine if there is a due process right to a bond hearing, but advocates said that if the rulings are allowed to stand they would “prolong detention in immigration custody” with “life-threatening consequences.”

“The Supreme Court’s ruling has effectively made it easier for the government to detain immigrants for years without providing them with a bond hearing,” said Marcela Taracena, a spokesperson for the American Civil Liberties Union of Arizona, in a statement.

“This is unjust especially with ICE’s (Immigration and Customs Enforcement’s long-documented record of abuse, neglect, and death in detention centers,” she said.

The first case involved Antonio Arteaga-Martinez, a Mexican citizen who first came to the U.S. in 2001 and who admitted he had left and re-entered the country four times without permission. But during one of the times he was returned to Mexico, in 2012, he said he was beaten by members of a street gang, and re-entered the U.S. illegally. 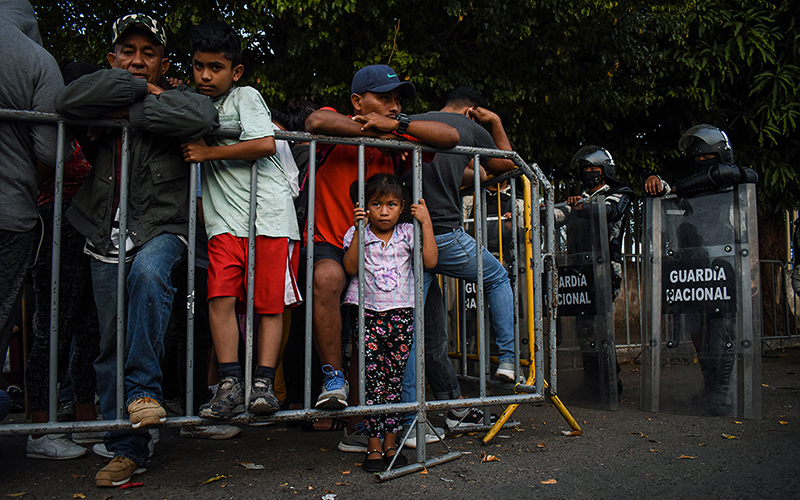 After he was arrested by ICE in 2018 and ordered deported, Arteaga-Martinez filed a claim for asylum, saying he feared persecution or torture if we was returned to Mexico. An asylum officer determined that his testimony was credible and Arteaga-Martinez was ordered held while his claim was considered.

But after four months, Arteaga-Martinez challenged his detention without a bond hearing. A federal district and circuit court agreed that he had a right to a bond hearing and would have to be released unless the government could show that he was a flight risk or posed a threat to the community.

The Supreme Court disagreed. Even though Arteaga-Martinez had no criminal record, and was expecting the birth of his first child when he was arrested, the court said the law cited by lower courts “does not address or ‘even hint'” at a requirement for a bond hearing.

“There is no plausible construction of the text … that requires the Government to provide bond hearings before immigration judges after six months of detention,” Justice Sonia Sotomayor wrote in the majority opinion.

While the law does not require a bond hearing, Sotomayor said lower courts still need to determine if Arteaga-Martinez has a constitutional due process right to a hearing. But Justice Clarence Thomas, in a concurring opinion, said flatly that the “due process clause does not ‘apply to laws governing the removal of aliens.'”

The second ruling involved two cases – one from Washington and one from California – in which migrants, like Arteaga-Martinez, were under removal orders and had applied for asylum. In those cases, however, the defendants filed class-action suits, claiming the right to a bond hearing for all immigrants in their situation being held for months at a time.

Lower courts agreed, and ordered the government to provide bond hearings for those migrants after six months.

The Supreme Court considered their cases only on the narrow question of whether they could bring a class action suit. It decided they could not, and reversed the lower courts’ rulings.

Justice Samuel Alito wrote for the 6-3 majority that the Immigration and Nationality Act “strips lower courts of ‘jurisdiction or authority’ to ‘enjoin or restrain the operation of’ entertaining the ‘respondents’ request for class-wide injunctive relief.” The only time courts are allowed to order relief, he wrote, is in the case of “an individual alien” – not a class of people.

Sotomayor dissented, writing that the “ramifications of the Court’s errors should not be ignored. Today’s holding risks depriving many vulnerable noncitizens of any meaningful opportunity to protect their rights.”

Those fears were echoed by Allen Orr, the president of the American Immigration Lawyers Association. He said Monday’s rulings could lead to continued long-term detention that could see noncitizens held for years without a bond hearing, even when they have not committed serious crimes.

“The concept that because someone isn’t American, they don’t have the same basic human fundamental rights that we would see of anyone else being detained is a problem,” Orr said.

Taracena agreed, saying that the rulings compound the problem for migrants who “face incredible difficulty in accessing counsel in detention.”

“The government’s inhumane policy of endless detention must end,” she said.