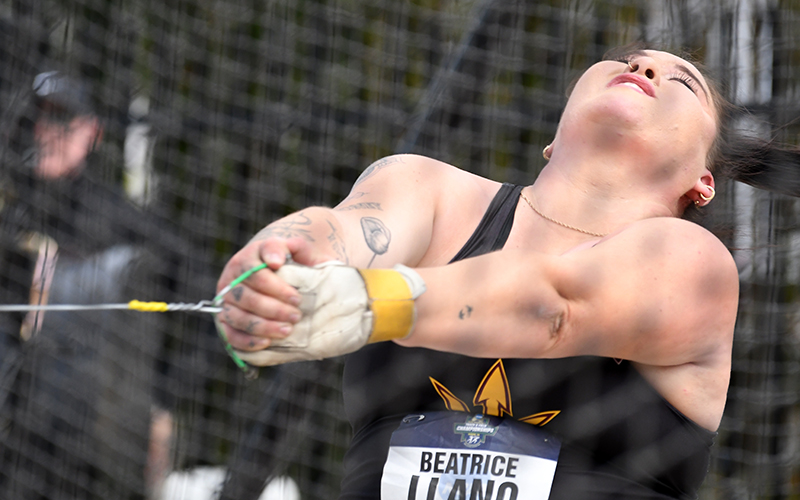 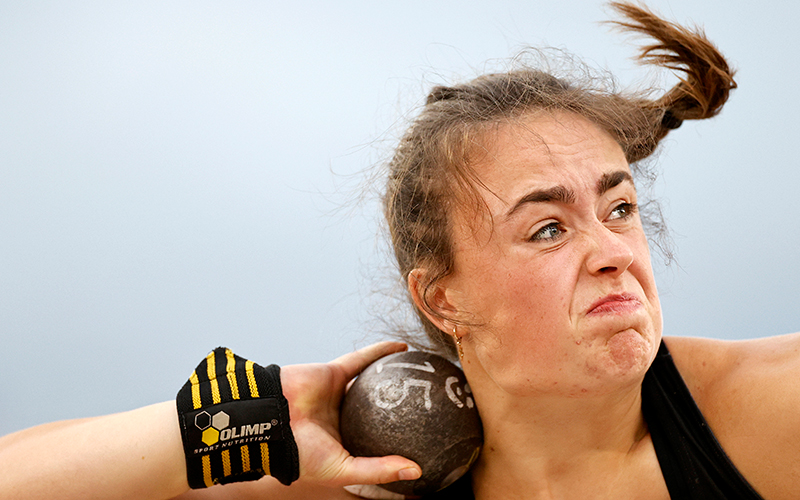 Jorinde Van Klinken of Arizona State competes in the shot put during the NCAA Outdoor Track and Field Championships at Hayward Field on June 9 in Eugene, Oregon. Van Klinken placed second in the event with an 18.58-meter (60′ 11½”) toss. (Photo by Steph Chambers/Getty Images)

EUGENE, Oregon – The Sun Devil women are sitting in first place after day two of the NCAA Outdoor Track and Field Championships at Hayward Field.

Only six of the 21 events have been scored on the women’s side; however, a dominant day from the Arizona State ASU throwers launched the Sun Devils to the top of the team leaderboard.

In both the first and second flights, each thrower receives three throws and the top nine athletes over the two flights advance to the final series, where three additional throws are awarded.

Both Llano and Moran advanced to the final series, with Moran sitting in fourth and Llano nabbing the ninth and final spot.

“I was just like, ‘Please, God, if I make it to the final, please, I’m going to redeem myself,” Llano said. “And when I finally made it, I was like it’s go time, I can’t be passive, I just gotta show that I am a good competitor and just get the best out of myself.”

Llano got the best out of herself in the finals as her fifth-round 72.10 meter-heave (236′ 6″) catapulted the Norwegian graduate student to third after she sat in eighth through four throws.

“I’m so proud of Beatrice Llano,” ASU coach Dion Miller said. “She did such a great job of qualifying in ninth and then moving up to third. That was a huge upswing for our team.”

Llano’s fifth-round throw was her longest throw in three years as the four-time first-team All-American battled through injuries the last several years.

Moran’s longest throw of the day, a 70.58-meter hurl (231′ 6″) on her fifth-round throw, not only was a personal record, but it moved her to third all-time on the ASU leaderboard (Llano is second).

“We train together every day in the weight room and on the field,” Moran said of Llano. “We just are there to support each other and be good training partners. We just push each other.”

“She wanted to win, but for (Aquilla) to break the collegiate record and for her to finish second, I’m so proud of her and what she was able to accomplish today,” Miller said.

Van Klinken will try to defend her discus championship on Saturday afternoon. A graduate student, she enters the final with the No. 1 ranking after her throw of 64.75 meters (212′ 5″) earlier this season.

ASU’s Adriana Tatum runs 23.33 seconds in the 200-meter prelims and does not advance to Saturday’s final. @sportscronkite @SunDevilTFXC #NCAATF pic.twitter.com/VhpAgqfw0I

“I thought I was going to stay in the 22s, but at least I’m staying consistent,” Tatum said. “I didn’t fall off too far.”

Tatum ends her freshman year second on the ASU all-time leaderboard in the 200 after running 22.77 at West Regionals.

“It was amazing because I had no expectations of coming this far,” Tatum said, looking back on her first year. “I thought I was going to peak at Pac-12s and then that was going to be it for me. (I thought) I wasn’t going to go to regionals or nationals, so the fact that I’m even here is a blessing in itself.”

“It was a great day,” Miller said. “I thought both of our upperclassmen did a great job (in the women’s hammer throw). Super proud of the young ladies today, and we’re going to start off with the men tomorrow, so I thought it was a great day.”

Friday night, Sun Devil sophomore Jeremy Cody will jump in the high jump finals at 5:30 p.m., and freshman Ralford Mullings and senior Turner Washington, who took second in shot put Wednesday, will represent the Sun Devils in the discus final at 5:35 p.m. ASU freshman Dayton Carlson will run in the 800-meter finals at 7:14 p.m, and ASU junior Vincent Mauri takes the track at 7:55 p.m. in the men’s 5,000-meter race. The ASU men are tied for 11th after seven of 21 events have been scored.

Men’s high jump and discus can be streamed on ESPN3. Television coverage starts at 6 p.m. on ESPN2.