Cornhole players from across the country gathered at Bell Bank Park sports complex in Mesa for the American Cornhole League pro shootout and open tournaments June 3 through 5, 2022. (Photo by Chris Nano/Cronkite News) 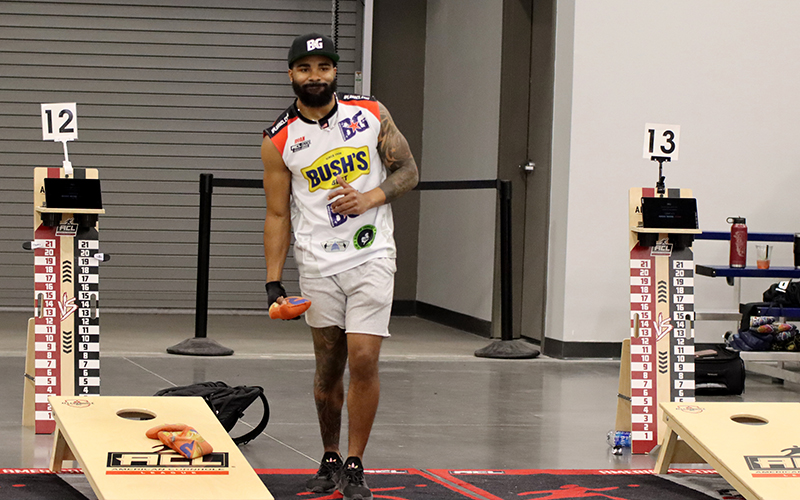 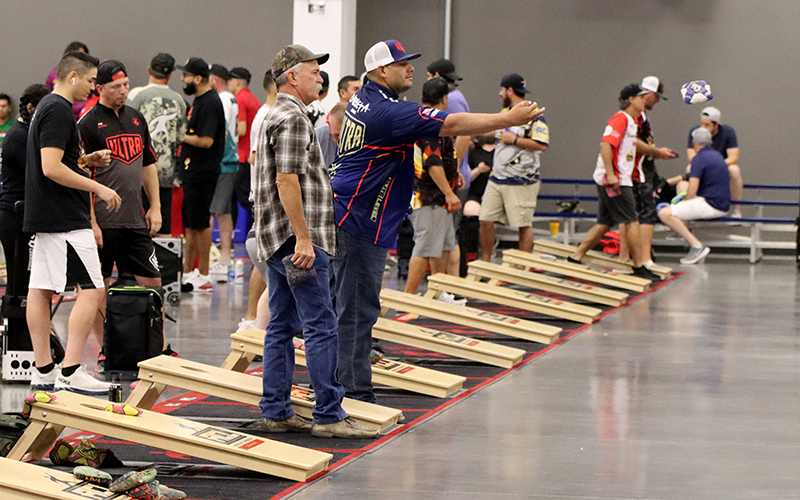 Last weekend, the American Cornhole League held its Pro Shootout #2 and Open tournaments at the park, drawing hundreds of competitors from across the country.

Cornhole, also known as bags, most often is played casually on the beach, at bars and at backyard barbecues, but this was competitive – at least for the pros. Players of various skill levels competed on 64 courts for prize money totaling more than $20,000.

In addition to the pro shootout, there was an open tournament where anyone at any skill level could compete in singles or doubles. One of them was Francisco Centeno of Mesa.

“I love it. It’s like a whole family away from family,” Centeno said. “So many great people, and it’s a great community. I just love this.”

In 2020, when the COVID-19 pandemic began, masks allowed cornhole players to socially distance, and the American Cornhole League took advantage of that to promote the game. That’s also when Jeff McCarragher, a broadcaster for ESPN and CBS Sports, started to bring more league coverage to a national audience, given there were fewer live sporting events to broadcast.

“The biggest (adjustment to broadcasting cornhole) was learning the vernacular,” McCarragher said. “My previous knowledge was playing in the backyard, you know, just kind of grabbing a bag and throwing it. Then, you get to this level and they can curb it, they can spin it, they can slide it, they can block you, they can roll it, they can airmail it.”

McCarragher, a native of Charleston, South Carolina, has been broadcasting sports since 2015, but didn’t have his first cornhole broadcast until New Year’s Eve of 2020.

“The players are so genuine, and they’re all just blue collar people,” he said. “They all have real jobs, so they’re relatable. It’s just something that we can all do, but yet I think everyone appreciates that they take it to a higher level and they try to do it in their backyard and are like, ‘Oh man, these guys are really good’ as pros really are.”

Ryan Smith, a project manager from Richmond, Virginia, made the trek west for the league’s second pro shootout of the season. Smith and his partner, Philip Lopez Jr., were crowned as the pro doubles champions on the first day.

The newly-formed duo Ryan Smith and Philip Lopez make it into the Pro Shootout Championship by winning in Mesa, AZ! 🎉😎 pic.twitter.com/132PrdW3Rx

Smith, who grew up playing horseshoes, is entering his fourth year as a pro. He’s no stranger to competitive sport, as he played four years of college football at James Madison University.

“I mean, honestly, there are still a little nerves,” he said. “Obviously there’s no physical aspect, like you don’t have to worry about banging heads with anybody, but I mean, everyone here’s pretty dang good.”

The shootout tournament concluded with the semifinals and championship on the “show court” and broadcast on the CBS Sports Network.

“I actually think it’s not so different from (mainstream sports),” McCarragher said, “and that’s why it’s so popular. Because like baseball, everyone can go in the backyard and play catch, right? A lot of us grew up playing baseball, and I think it’s the same thing with cornhole. It’s very relatable. Many of us played it at tailgates just like I did when I was a kid going to (University of) Iowa games with my dad.”

The league hosts multiple regional events across the country.

“We go to Colorado, California, North Carolina and Florida,” Centeno said. “We travel everywhere. Everybody does, you know? They follow big tournaments like this with a pretty big turnout. People travel all over the country.”

Centeno, who has been throwing bags at various events for almost three years now, wears a jersey with the name “Mesa Boyz.” When he was introduced to the sport, he saw it as a way to help his son, who has attention deficit disorder.

“(My son) was scared to come out and be around people,” he said. “One time we saw cornhole about three years ago, at this bar, when we went to go eat. They were playing it. So we tried, and he sort of liked it. I went home and bought some boards, and from there it brought him out of his shell. It’s like therapy for him. So now all we do is play cornhole.”

Centeno and his son weren’t the only father-son duo playing last weekend.

Participating in their first official cornhole event were David Sylvester and his son, Jack, who drove from San Luis Obispo, California, to get a taste of a competitive atmosphere.

“We played camping outdoors and in our barn at the ranch,” David Sylvester said. “We just figured why not try something different and go see how good we really are?”

For both the Centenos and Sylvesters, there’s more to cornhole than winning: It’s about having fun and spending time with family and friends.

The openness and accessibility of cornhole draws people in. The league doesn’t even rank players by gender or age.

“You got all sorts of people from all sorts of backgrounds,” Smith said. “I mean, you have women, children, kids as young as 8 and probably younger. You got older people like 60 to 70 years old, and everybody loves the game. It brings everyone together, and I think that’s pretty dang cool.”

By the end of the weekend, Jillian “Jillybean” Willis, the 2021 female player of the year, ended up as the 14th-best player in Arizona. Willis played in open solo and in doubles competitions with her husband.

“My husband found that you could play competitively,” she said. “So he started to go out to places to play, and I was like, ‘Well, I can do this, too,’ so I started to join him and it’s been like that ever since.”