Friends of Miranda Mathis, 11, grieve in front of a cross bearing her name. She was one of 19 children killed along with two teachers in a school in Uvalde, Texas, on May 24. (Photo by Matthew Busch/CNN)

Neither bill is expected to pass the Senate, which is trying to craft its own bipartisan gun-control plan, but House Democrats said it was time to act.

“These mass shootings, suicides, and community gun violence must end,” Rep. Ruben Gallego, D-Phoenix, said in a statement Wednesday. “Today, the House took action, and I’m proud to stand with my colleagues to support commonsense legislation that will protect our children, families, and neighbors.”

“I unequivocally condemn the recent shootings that have occurred throughout our country,” Rep. Andy Biggs, R-Gilbert, said in a statement. “But it’s inappropriate for Democrats to use the heightened emotions of a grieving nation to push through a radical, anti-Second Amendment agenda.” 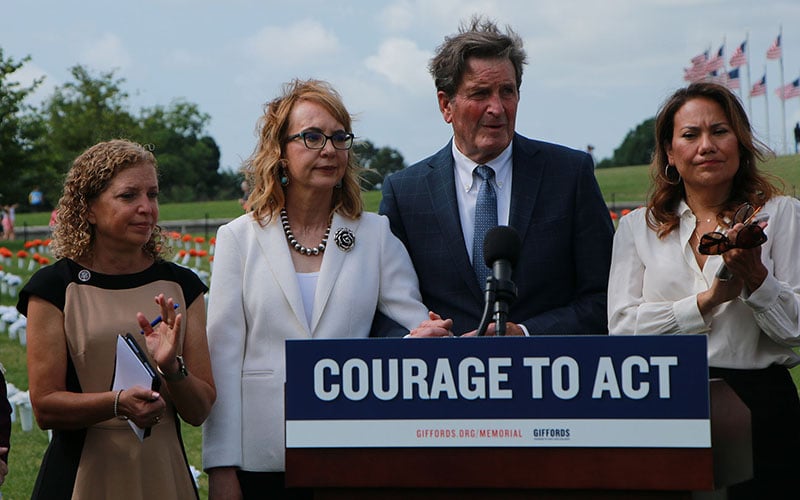 The votes, on Wednesday and Thursday, came during a week in which advocates have flooded Washington to demand action on gun laws. And Wednesday’s vote on the Protecting Our Kids Act, came just hours after a House committee heard the emotional pre-recorded testimony of a survivor of the Uvalde shooting.

Miah Cerrillo, an 11-year-old student at Robb Elementary, told the House Oversight and Reform Committee how her teacher was shot in front of her and how she covered herself in the blood of a friend who was shot and played dead to avoid being shot herself.

That evening, the House voted 223-204 to pass the Protecting Our Kids Act, with only a handful of Democrats and Republicans crossing the aisle. In Arizona, all five Democrats supported the bill and all four Republicans opposed it.

The bill would raise the minimum age to buy a semiautomatic to 21, establish new federal criminal offenses for gun trafficking, toughen gun-storage restrictions, limit large-capacity magazines and regulate ghost guns, among other measures.

“The biggest question is, of course, what can pass the Senate,” said Noah Lumbantobing, a spokesperson for March for Our Lives, which plans rallies nationwide Saturday to call for gun safety.

Any legislation needs at least 60 votes to survive a filibuster in the Senate. Because of that, Sen. Chris Murphy, D-Conn., has been working with a bipartisan group of senators in the wake of Uvalde – and an earlier mass shooting that killed 10 in a Buffalo grocery – to craft a compromise measure.

“I don’t think it’s realistic to expect that the Protecting Our Kids Act is going to pass the Senate and that’s shameful,” Lumbantobing said. “But at the very least, I think we can get something passed in the short-term future.” 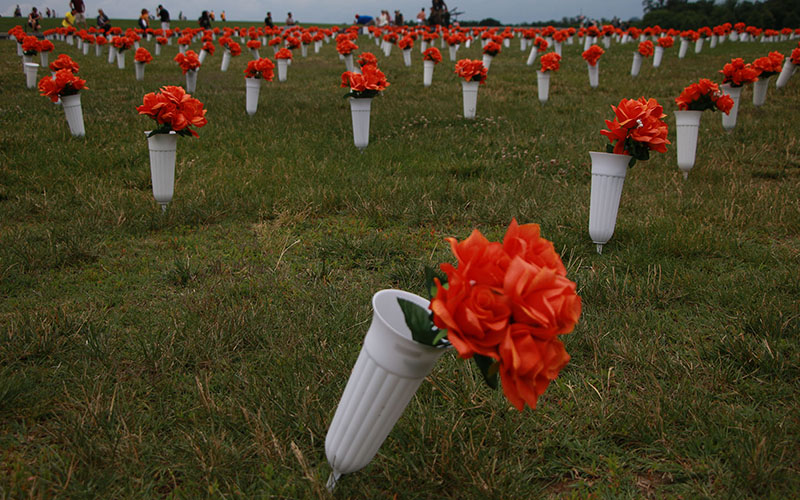 A memorial on the National Mall to victims of gun violence included 45,222 white flowers for every person killed by guns in 2020, and another 5,000 orange flowers to represent more recent victims. (Photo by Daisy Gonzalez-Perez/Cronkite News)

While the Senate may not go for the Protecting Our Kids Act, Lumbantobing said March for Our Lives is “cautiously optimistic” that it will at least be able to tighten current background check laws, if not call for universal background checks.

Sen. Mark Kelly, D-Ariz., “is continuing to talk with Republicans and Democrats to find a common ground on legislation that can pass the Senate,” a spokesperson said. And Sen. Kyrsten Sinema, D-Ariz., is also in “bipartisan conversations with her Senate colleagues … on this important issue,” her spokesperson said.

The House on Thursday voted 224-202 to pass the Federal Extreme Risk Protection Order Act of 2021, or “red flag” bill that would allow courts to prevent the sale or order the confiscation of a gun from someone who poses a risk to themselves or others. Household or family members, as well as law enforcement officers, could petition courts for such an order.

That vote was also largely on party lines, with Republicans arguing that it would deny people their due process and Second Amendment right. All four Arizona Republicans voted against it.

“House Democrats’ bills disarm American citizens,” Rep. Debbie Lesko, R-Peoria, said in a statement Thursday. “They attack due process and the right of law-abiding citizens to protect themselves and their families.”

All five Arizona Democrats voted for it, with many arguing that it is a reasonable way to keep guns out of the hands of individuals who could hurt themselves or others.

“This new legislation will help keep deadly weapons out of dangerous hands,” Rep. Ann Kirkpatrick, D-Tucson, said in a statement. “Extreme-risk laws are saving lives, already implemented in other states. We can and must do more for our communities.”

After Uvalde, schools balance hard and soft deterrents to attacks

Currently 19 states and the District of Columbia have similar “red flag” laws. Arizona is not one of these states. After saying in 2018 that he would support such legislation, Gov. Doug Ducey promised in 2020 that no gun-control laws would be enacted in the state while he was in office.

Shannon Watts, the founder of Moms Demand Action, said the group is “thankful to gun-sense champions in the House for putting public safety above gun industry profits and passing these life-saving policies.”

“We don’t have to accept our gun violence epidemic that takes over 110 lives per day as normal – and thankfully the House agrees and is taking action,” Watts said in a statement.

“We’ve seen time and again that the House will do its job while the Senate flounders,” Grijalva said in a statement this week.

He said Congress needs to do more, calling for a renewed ban on assault weapons. “There is no justifiable reason to have weapons for war roaming our communities,” he said.

Lumbantobing welcomed the House action, even though he said “some of the pieces of the bills are long overdue.” He said groups like his will continue to fight, although he is optimistic that the Senate may finally act after the recent space of mass shootings.