A strong representation of fans for Team Mexico showed up at State Farm Stadium to watch Mexico take on Uruguay in a soccer friendly. (Photo by Christian Petersen/Getty Images)

GLENDALE – Attendance at international friendly matches has made soccer headlines recently, especially after Christian Pulisic of the U.S. men’s team called out fans, but support wasn’t a problem at State Farm Stadium Thursday night when Mexico and Uruguay met.

“We knew what kind of scenario we were going to face tonight because Mexico plays as the home team everywhere they go,” Uruguay coach Diego Alonso said. “They pack stadiums in the World Cup, so of course they do it here in the United States as well. But I don’t think this means the victory was harder, because we were prepared for it.”

The match was the 13th time the Mexican National Team has played in Arizona and the ninth at State Farm Stadium. The team’s first stop was in 2002 against Yugoslavia at then-Bank One Ballpark.
On Thursday, it was a friendly between the de facto home team and Uruguay, and it was “Los Charrúas” who won.

The loss marked only the third time “El Tri” has been defeated in Arizona, something that hasn’t happened in more than 15 years.

That time they fell to the United States, the first-ever game at this venue.

But why has Mexico had such a successful history in Arizona? That might be explained by the amount of fans wearing green, red and white colors in the stands.

According to the Arizona Hispanic Chamber of Commerce 2021 DATOS report, nearly 33% of the state’s residents are Hispanic, which accounts for approximately 2.4 million residents.

And although not all Hispanics are Mexicans, Mexican apparel far outweighed the amount of blue Uruguay jerseys in the stands.

“Obviously, every time we play in the United States, here in Phoenix or, for example, in the last game in Dallas, we always play as the home team,” Mexico coach Gerardo “Tata” Martino said after the game. “Our problem is not on what happens off the field, but on the field, especially in the second half.” 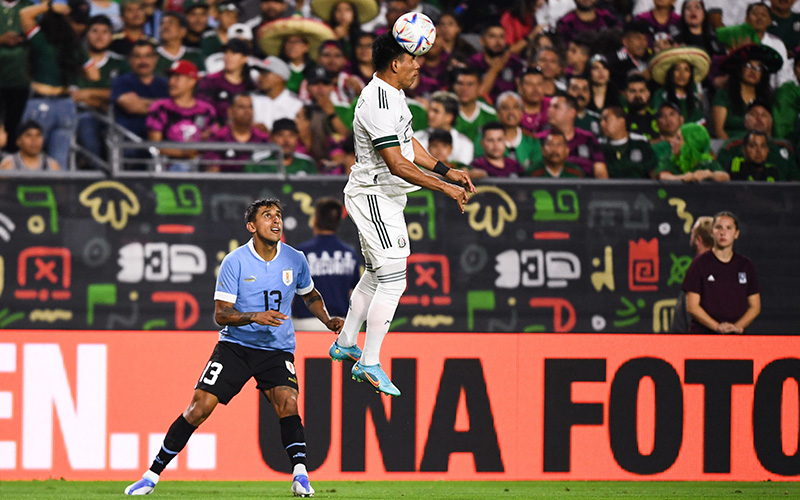 Martino was very critical of play in the second half. Just 15 seconds after the break, Uruguay’s Facundo Pellistri found an open Edinson Cavani to increase the lead to 2-0.

Less than 10 minutes after that goal, Damián Suárez, who plays for LaLiga’s Getafe Club de Fútbol, made a play on the same right side of the field to find Cavani, who was again open, but this time outside the box. The Manchester United striker proved why he was the best player in the game, scoring on the first touch to make it 3-0.

The Uruguayan also wanted to compliment the environment the fans created.

“The truth is, it was a beautiful game because of the amount of people there was tonight in the stadium,” Cavani said. “It was very enjoyable.”

Despite the loss for Mexico, the history of the “El Tri” in Arizona remains positive.

Apart from the three losses, Mexico has won seven games and drawn three in the Valley.

The first victory came in a friendly game against Hungary, in which they won 2-0 at Chase Field.

Their first official game, which was played at the Cardinals’ home in Glendale, was during a 2009 Gold Cup match. Mexico faced Guadalupe and won 2-0. El Tri would end up winning the entire tournament, defeating the U.S. 5-0 in the final.

Another big game in Mexico’s history in Arizona happened during the Copa América Centenario of 2016. That time, they faced Uruguay, Thursday’s rival, but won after dominating 3-1.

Their last official game in Arizona occurred in 2021, when they beat Honduras in a Gold Cup game before 64,211 fans.

Thursday’s attendance wasn’t quite as big but it was a strong showing on the heels of Pulisic ripping U.S. fans for their poor representation atTQL Stadium in Cincinnati, Ohio, which drew fewer than 20,000 fans.