The UCLA softball team’s trip to Oklahoma City makes it the 31st time the Bruins have been to the Women’s College World Series, an NCAA record. (Photo by Matthew Legere/Cronkite News)

LOS ANGELES – With the 2022 Women’s College World Series underway in Oklahoma City, it is impossible to ignore how much Pac-12 schools have dominated storylines in the postseason softball tournament.

The University of Arizona and Oregon State have both punched tickets to the event, with two-game series wins against Mississippi State and Stanford, respectively. However, another Pac-12 school is widely regarded by oddsmakers to have the best chance among the three conference schools to win the whole thing again.

“I am the luckiest coach in the country,” UCLA coach Kelly Inouye-Perez said.

UCLA struggled in the tournament’s first game Thursday, falling to Texas 7-2. But resilience has defined the team this season and the Bruins are still optimistic in this double-elimination event. In games still to be played, Oregon State takes on Florida Gators and Arizona faces Oklahoma State.

UCLA has tradition on its side. It has advanced to the Women’s College World Series in seven straight seasons (the 2020 season was not completed) and won the national championship in 2019.

“Playing in such a historically successful program like UCLA, you’re almost expected to be in OKC every year,” UCLA center fielder Maya Brady said.

Inouye-Perez believes “our culture is our strength. People say, ‘Of course you have culture because you win,’ but I think it’s just the opposite. We win because we have culture.”

UCLA is one of three Pac-12 teams to advance to the eight-team tournament, tying with the Big 12 for most conference representation. With Arizona State putting up a fight in the regionals as well, Pac-12 softball has the chance to produce some of the biggest stories of the tournament.

Strong pitching and offenses performing in the clutch have carried all three Pac-12 schools.

Throughout their postseason run, UCLA’s pitching gave the offense room to work. The Bruins duo of Megan Faraimo and Holly Azevedo have pitched every single postseason inning, only allowing one run in each of the regional games, and held Duke to only two runs in each super regional game.

“(It’s) huge.” Inouye-Perez said of her pitching depth. “Having the 1-2, Holly and Meghan, I could go either way.”

UCLA’s 1-2 punch on the mound has helped the Bruins post the best postseason performance of the three Pac-12 schools.

Arizona has a similar duo of Hannah Bowen and Devyn Netz. It has thrived as well, posting back to back complete-game shutouts in two regional games against Missouri State.

Arizona’s staff has also struggled. In the Wildcats’ opening game in the regionals against Illinois, Bowen allowed 10 hits and three earned runs. Bowen also gave up two runs against Mississippi State in a game where the Wildcats’ offense lay dormant until the sixth inning, eventually needing extras to close out the game. 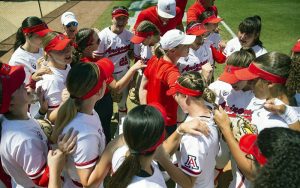 One of the most unlikely success stories of the college softball season has been told by Arizona, which features a first-year head coach. (Photo courtesy of Arizona Athletics)

In contrast, one of UCLA’s most concerning pitching performances came in game one of its super regional series against Duke, when Megan Faraimo walked the first batter she saw on four pitches and gave up two runs in the first two innings.

She then proceeded to retire fourteen batters in a row.

“I always tell Megan, ‘Go out and be aggressive early in the game, and get better throughout a game and learn as much as you can,” Inouye-Perez said. “There’s so many things we planned as a team to prepare for moments like this.”

“Just learning about them early helps a lot,” Faraimo said. “Making my game plan for the rest of the game around (being aggressive) helped a lot.”

She was used much more than her counterpart Sarah Haendiges, often starting back to back games and coming in in relief often. Haendiges has only pitched more than five innings once this postseason.

“We’re not a program that relies on one,” Inouye-Perez said. “But if somebody steps up, and you’ve seen us have those opportunities with one pitcher, and you’ve also seen us, in the past, in history, have the opportunity to do both.”

The other area where UCLA appears to be a clear favorite above its Pac-12 competition is offense. In the postseason, UCLA scored fewer than seven runs only once/

In contrast, Oregon State’s offense only put up more than four runs twice, and more than five runs only once. Arizona had an eight-run game in the regionals and a seven-run game in the super regionals, but with three games of three or fewer runs in between.

“I wasn’t very happy with my at bats this weekend,” Arizona first baseman Carlie Scupin said after the Wildcats clinched a WCWS berth “I kind of knew I was due and I had to do something for Devyn cause she was pitching a great game.”

Scupin homered in the fourth inning against Mississippi State for what would go on to be the series winning run. The previous game she went 0 for 4.

UCLA’s offense, along with being consistently high powered, is timely. In the rare moments when momentum isn’t in the Bruins’ favor, they rally. The series against Duke revealed that.

The young program from Duke, making its first ever appearance in the super regionals, had UCLA down 2-0 in game one and came back to tie up game 2 after trailing 2-0. In both games, late inning rallies by UCLA catapulted them to victory.

“That’s the best thing about our sport is that it’s not timed,” Inouye-Perez said. “We try to play the game inning to inning, pitch to pitch.”