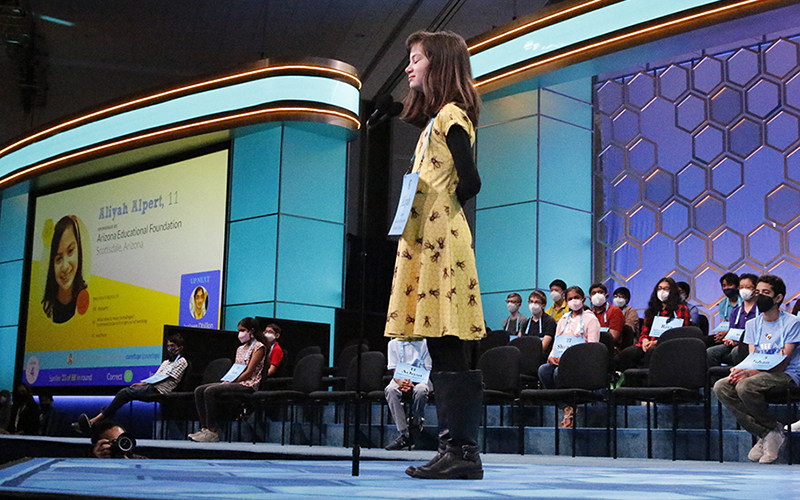 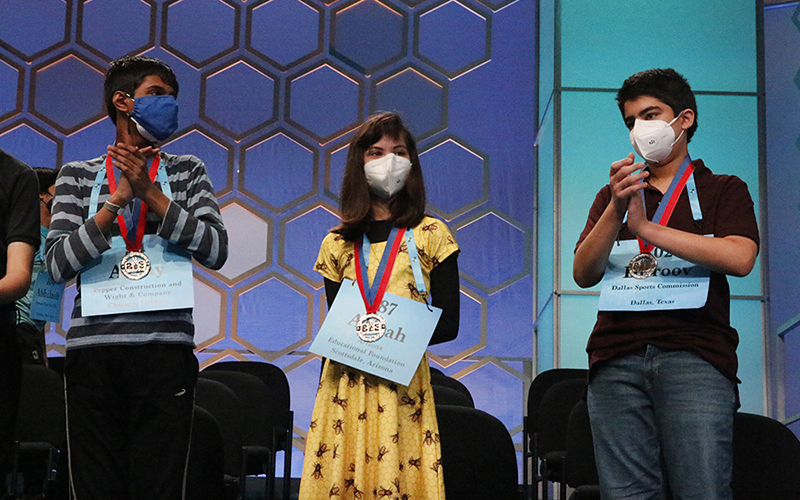 Aliyah Alpert is the lone Arizona contestant in this year’s Scripps National Spelling Bee and one of the two youngest finalists at age 11. (Photo by Elsa Hortareas/Cronkite News) 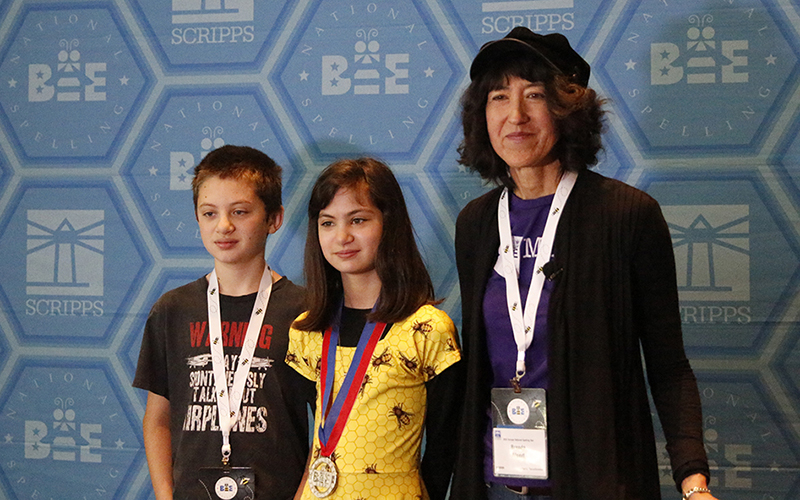 Prescott resident Aliyah Alpert, 11, with her her twin brother, Jacob, and her mother, Brenda, at the Scripps National Spelling Bee in Washington this week. (Photo by Elsa Hortareas/Cronkite News) 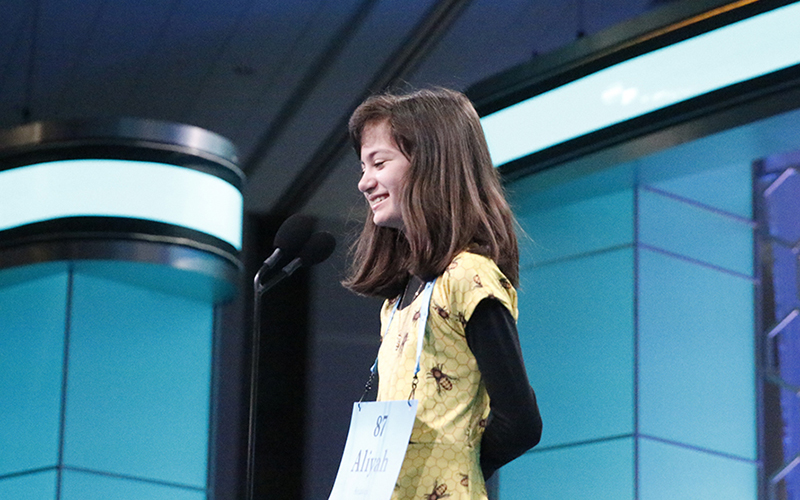 Aliyah Alpert said she has been nervous through eariy rounds of the spelling bee, but she appears composed and relaxed on stage. (Photo by Elsa Hortareas/Cronkite News)

WASHINGTON – Standing on stage at the Scripps National Spelling Bee, Prescott sixth-grader Aliyah Alpert was the picture of composure.

She nailed the spelling of “nuciform” – a description of something nut-shaped – and easily defined “malinger” – to get out of work by pretending to be sick. But she admitted that she almost blew it on “dyspathy,” which she was tempted to spell with an “i.”

“Does this contain the Greek root ‘dys,’ meaning abnormal?” she asked the judge, before being told it did. “D-y-s-p-a-t-h-y. Dyspathy.”

That was just one of the correct answers over two days of competition that landed Aliyah, the only Arizona competitor at this year’s national spelling bee, in the final round Thursday. She is one of just 12 finalists from the field of 229 spellers that started on Tuesday.

“I’m so excited,” Aliyah said, after making it to the final round. She admitted that she did not expect to make it, calling it her “dream to get to the finals.”

The home-schooled 11-year-old has been working toward this point for years, competing at the state level in two previous state competitions before winning on her third try this year, when she beat out 26 other students to advance to the national bee.

The Scripps National Spelling Bee made a return to in-person competition this year, after virtual contests during the pandemic. (Photo by Elsa Hortareas/Cronkite News)

Since winning the state competition in March, Aliyah said she has spent three hours a day with her dad, poring over the list of 4,000 words from which words for two of the first three rounds were chosen.

“I am definitely pretty nervous, but I am pretty confident that I can at least spell the first two, because they are on the list,” she said before Tuesday’s competition. “The third word I am more nervous about.”

This year’s bee, the first in person since the pandemic, was a smaller affair than normal. In a typical year, Arizona would send a handful of students to compete in Washington in a field that can top 500 contestants.

As crew members bustled about the cavernous ballroom at the Gaylord National Resort and Convention Center where the bee was held, a mostly hushed audience of parents and siblings sat and watched, politely clapping when a speller got an answer right. And also politely clapping when the dreaded bell rang to signal a wrong answer, as the contestant shuffled off the stage to be met by waiting parents.

Many of the spellers extended their time at the microphone, asking for all the information on their given word – pronunciation, derivation and use in a sentence – before they started spelling.

Most appeared nervous, tracing their words on the palm of one hand, brows furrowed and faces locked in concentration. They ranged in age from 7 to 15, with 46 of them having competed before at the national level.

The emotions were even more evident at the quarterfinals. Aliyah later said she was nervous, but it was not obvious – as she approached the microphone Wednesday she commented on the tie worn by the official bee pronouncer, who complimented her in return on her bee-patterned dress.

She asked briefly about the origin of her first word Wednesday – croupous – before spelling it correctly and taking a seat with the other semifinalists in the morning.

Michael Perry, a spokesman for the E.W. Scripps Co. that sponsors the bee, said spellers are typically split between those who are confident and those who appear “sick to their stomach,” and Aliyah “has appeared very confident.”

Even though she worked through her rounds with few of the tics or delaying tactics of other contestants, Aliyah said she was nervous on the stage.

“I feel like I have got a lot of weight on my shoulders,” she said. “I just want to represent Arizona.”

The state’s only national winner was in 1953, when Elizabeth Hess correctly spelled “soubrette.”

Despite the competitive nature of the event, the overall vibe was one of encouragement. Many of those eliminated in the first rounds left the stage to handshakes and “good-luck” fist bumps with the remaining contestants.

“Everybody is really supportive, I can’t really see any rivalry,” Aliyah said Tuesday. “I am sure there is, but no one is being mean about it.” 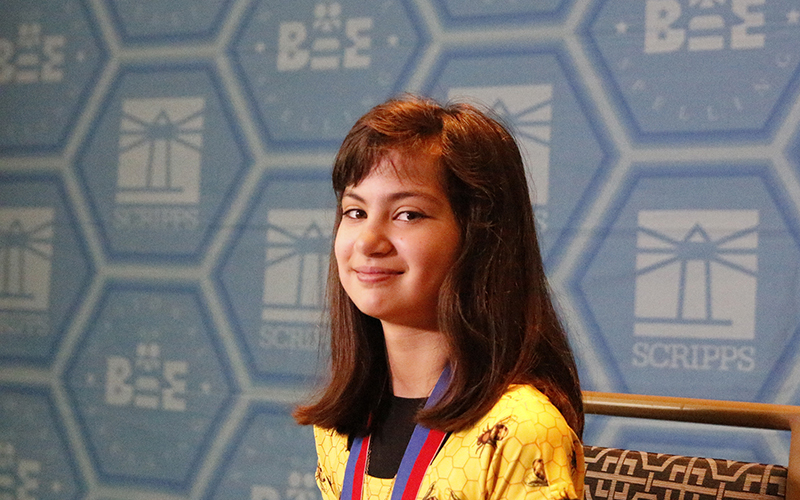 Aliyah Alpert, 11, said she hoped to make the quarterfinals of the Scripps National Spelling Bee, and making the final round was a “dream.” (Photo by Elsa Hortareas/Cronkite News)

Aliyah was joined by her parents, Brenda and Mark Alpert, and twin brother, Jacob. Her main goal was to make the quarterfinals – although when she heard that had to show up for them at 7:45 a.m. Wednesday she said, “I feel tired already.”

In the semifinals Wednesday afternoon and evening, Aliyah correctly spelled “ostmark” and “trevally” and gave the correct definition of “verklempt” – someone overcome with emotion – enough to get her into the final round Thursday night.

Her mom called the “whole thing is surreal because we never ever ever dreamed of this.”

“We were shooting for semifinals,” Brenda Alpert said. “There was definitely an element of luck.”

Aliyah said she “expected to get out in the semifinals” and was almost thrown by trevally, repeatedly thinking of the wrong spellings before getting it right. Even though the finals are her dream, she knows it will be a challenge because “the words in the finals are really hard.”

But, again, she did not appear too stressed. Aliyah said that if she does not win, she plans to take a break next year and try again in 2024, focusing in the meantime “more on my music, and riding my pony.”

“No matter what happens here, she can come home happy,” she said.